Way back in 1964, Arthur C. Clarke described how a 3D printer would work. However, the first 3D printer wasn’t created until 1987 by Chuck Hull.

As a result, 3D printing is a much more environmentally friendly manufacturing method as it uses far less material than subtractive processes. Read on to find out more about hemp and 3-D printing.

Creating an Object With a 3D Printer

The entire process begins with a three-dimensional model. You can either download one from a 3D repository or develop one yourself. You can use a 3D scanner, 3D modeling software, code, an app, or a haptic device for the latter.

3D modeling software is one of the most popular choices. There is open-source software available for free. Alternatively, you can choose to pay thousands of dollars a year for a license to get industrial-grade software. Once you have your 3D model, the next step is to prepare the file for the printer. This process is known as ‘slicing.’

Slicing involves dividing your 3D model into hundreds, or even thousands, of horizontal layers. While you can buy special slicing software, high-grade printers often have built-in slicers. All you have to do is select the file and feed it into your 3D printer. Then you get to see your sliced model being printed in three-dimensional form layer by layer!

3D printing has a vast range of applications, including:

3D printing experts now believe that the process is the future of construction. At the time of writing, it is already possible to print doors, floors, and walls. If you have enough time on your hands, it is potentially possible to print an entire house!

At present, the dominant material for 3D printing is plastic. However, innovators are now using coffee, beer, and even hemp!

Several companies are exploring the possibility of using recycled material for 3D printing. The market for plastic filaments is hugely competitive, so it is necessary to find alternatives to stand out.

The popular plastic filament is also an environmental hazard. These filaments are made from plastics that are melted down at extremely high temperatures to create objects. Various firms have decided to go green and use materials such as hemp plants, recycled beer, and coffee waste.

As well as being better for the planet, these alternative filaments can print with PLA using standard PLA settings. They aren’t dyed, which means you end up with natural colors.

3D Fuel was one of the first companies to create a hemp-based 3D printing filament. Its unique ‘Entwined’ filament is made from American grown hemp. You can see the natural brown color, which contains no dye. It also has a significant amount of visible bio-fill; you don’t get that with standard PLA.

Recently, 3D Fuel reduced hemp’s particle size but increased the percentage in its filament. As a result, you can use Entwined in a far greater variety of printers. For the record, the material prints well at temperatures of between 356- and 410-degrees Fahrenheit. The brand recommends a starting point of around 20 degrees Fahrenheit lower than typical temperatures utilized in printing with PLA.

Hemp is making a big comeback. Thanks to the Farm Bill of 2018, it is legal to grow hemp in many U.S. states.

3D printing can reduce the manufacturing industry’s environmental impact for many reasons. It reduces waste, speeds up manufacturing processes, and uses less energy in the main.

However, mistakes are common when using 3D printing. When this happens using plastics, you end up wasting a lot of material. As a result, people are championing recyclable materials such as PLA and hemp as viable alternatives. Hemp, in particular, could be a godsend to the industry due to its relatively short growth cycle. 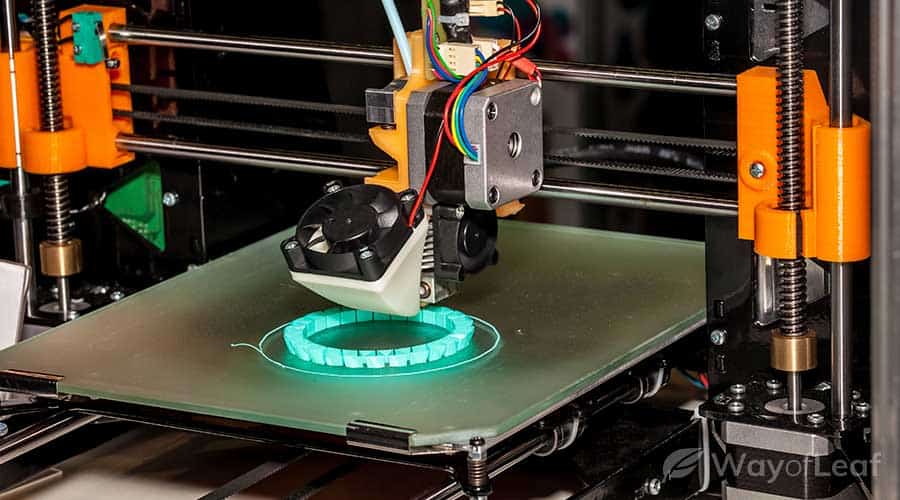 PLA is also biodegradable, so when you combine it with hemp, you open up a world of possibilities. Making hemp filament isn’t that difficult once you become familiar with the process. Typically, you use PLA as a polymer base and grind up the hemp fibers into particles and mix them into the PLA. The legality of hemp filaments depends on where you live. In France, for example, hemp filaments must have 0.2% THC or less.

As for using 3D printer hemp filament, the printing properties closely resemble those associated with PLA. It is odorless, which makes it ideal for use indoors in smaller spaces. As hemp filament is ‘low-warp,’ it means you don’t need a heated bed when printing. However, if you use one, the best heat setting is 104 degrees. The combination of biodegradable attributes and ease of use make hemp filament a good choice for daily prototyping.

The 3D printing construction market is experiencing massive growth. In 2017, it was worth around $70 million per annum. The market was valued at $13.7 billion in 2020. Industry experts project that the market could be worth $51.77 billion in 2026! In many ways, it shouldn’t come as a surprise, given the benefits of using 3D printing in construction.

Aside from the high durability of printed buildings, they are faster to construct and have far lower costs and wastage. 3D printers also make it easier to create complicated design masterpieces.

Mirreco is an Australian biotechnology company dedicated to finding environmentally friendly ways to construct buildings. It hopes to build 3D printed homes made from hemp filament ultimately. Already, Mirreco has developed carbon-neutral hemp panels that are being 3D printed into walls, roofs, and floors.

It is worth remembering that hemp can hold and store carbon dioxide, a significant advantage in the quest to reduce ‘greenhouse gases.’ It is now possible to create hemp-based biocomposite materials. These are stronger and more reliable than the synthetic materials currently used in the construction industry.

Back in 2018, Mirreco unveiled its concept of a sustainable hemp home which Arcforms designed. According to Mirreco, the walls, roof, and floors were to be made using hemp biomass. The windows will allow light to pass through the glass and get converted into electricity. Ultimately, the company wants to manufacture, sell, own, and operate many mobile machines to process the hemp onsite.

Naturally, the company plans to use a gigantic 3D printer. A prime example is the Autonomous Robotic Construction Systems (ARCS) printer designed by S-Squared 3D (SQ3D) Printers. According to the company, its XXL printer will be able to create structures of up to 92,000 square meters!

SQ3D has a humanitarian goal in mind. It has stated that it plans to create properties for people in impoverished regions. It continued by saying that they could build a 500 square foot home for around $1,000. Most importantly, these structures would be solid enough to withstand tornadoes, hurricanes, and virtually any natural disaster.

The list of potential uses for the hemp plant is growing. Hemp can be used to create the filament used in 3D printing. It is a significantly more environmentally friendly material than plastic, and its durability and versatility make it a great option. Imagine a situation where it becomes possible to use hemp filament and a 3D printer to build an entire house for little more than a thousand bucks. That sounds like a future worth aiming for.