If you live in a state where marijuana is legal for medical use, it is easy to locate high-quality cannabis. However, this certainly wasn’t the case over the last few decades. Federal policy towards marijuana meant that cannabis lovers had to sometimes settle for less than top-shelf weed.

‘Schwag’ or ‘brick weed,’ an extremely low-quality form of marijuana, was standard. It wasn’t as if you could complain to the police since marijuana was illegal all over the United States.

Now, there is still plenty of bad weed around, even though states where cannabis is legal recreationally, have a surplus. However, one form of low-grade cannabis that you definitely won’t find in a dispensary is ditch weed. Read on to find out more.

Weed in the Wild

Also known as ‘feral’ marijuana, ditch weed is a slang term for cannabis grown in the wild. According to the Drug Enforcement Agency (DEA), ditch weed is defined as wild and scattered marijuana plants with no evidence of being planted, fertilized, or tended.

Ditch weed is exceptionally tough and disperses its seeds across a large area. These seeds can lie dormant for up to a decade before sprouting!

Ditch weed is extremely low in THC, suggesting that tales of ditch weed ‘highs’ are exaggerated.

As the name suggests, you can find it on the side of the road. Some people say that if you dry and cure it adequately, it may still be usable. However, we wouldn’t advise consuming it if you want to experience an intoxicating high. Ditch weed is extremely low in THC, suggesting that tales of ditch weed ‘highs’ are exaggerated.

Where Can You Find Ditch Weed?

In 1914, the U.S. Department of Agriculture said that hemp was abundant as a wild plant in many locations in the Midwest, including Iowa, western Missouri, and southern Minnesota.

Indeed, ditch weed was cultivated in many parts of the Midwest in the early-to-mid-20th century. It proved especially useful during World War II as it helped create materials to support the war effort. 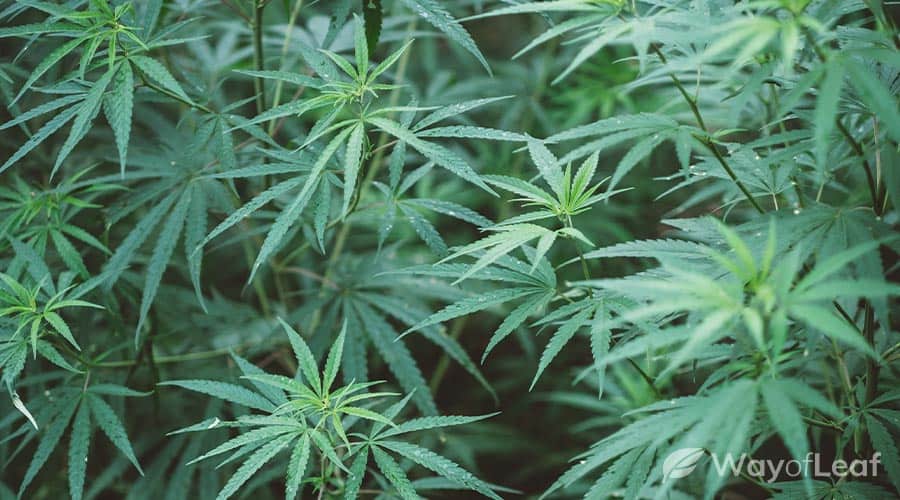 Today, if you drive through certain parts of Nebraska, Iowa, and Kansas, you will be able to see fields of ditch weed, and there are also strands of it lying along the road. If you decide to stop and take a look, you will be surprised by the pungent odor. If you’re worried that you won’t be able to see feral marijuana, rest assured, it is EASY to spot.

Ditch weed is very tall compared to surrounding plants and also varies significantly in color and shape. Feral weed plants can grow up to nine feet tall and its emerald-green color, coupled with its Christmas tree shape, means it can be spotted from miles away.

It may be tempting to fill up your car’s boot with ditch weed. However, there is one problem; it is descended from industrial hemp, so its THC content is minimal.

The obvious answer seems to be ‘yes’ since it is descended from industrial hemp and is very low in THC. The Farm Bill of 2018 means that it is legal to grow industrial hemp in almost all states. However, there appears to be no clear definition, which means it is possible to be arrested if caught in possession of ditch weed.

This is especially the case in states such as Kansas, Iowa, and Nebraska, where marijuana is still illegal. Reportedly local police in small towns watch out for individuals attempting to fill up a vehicle with what they think is a free goldmine.

Some individuals try to circumnavigate the law by deliberately planting marijuana seeds in ditches before returning for it. The rationale behind this tactic is the DEA’s stance on ditch weed which says that it grows in the wild with no evidence that it was part of planned cultivation. Once again, we don’t recommend testing out this theory.

Various authorities in the Midwest have tried to eradicate feral cannabis. The DEA created its Domestic Cannabis Eradication/Suppression Program in 1979 and uses federal funds to eradicate marijuana. Within 13 years, the program eradicated 118 million feral plants against just 6 million cultivated ones.

In 2003, a report claimed that 99% of eradicated weed was feral. In Minnesota, ditch weed is one of “11 noxious prohibited weeds” known for damaging farming equipment. However, because there is so much feral cannabis that grows freely, some states have given up the fight. In Indiana, for example, authorities have effectively ended eradication efforts. One police force member said it was about as easy to get rid of ditch weed as it is to eradicate dandelions!

If you are driving in the Midwest and happen to see a field of ditch weed, feel free to stop your car to marvel at these tall plants. However, do not take some home with you.

Chances are, the state you are currently in still prohibits marijuana, and it is unlikely that law enforcement will distinguish between hemp and cannabis. There is no point taking ditch weed home with you in any case because it is extremely low in THC. Stick to the top-shelf marijuana available in your local dispensary.

Related article
What Is “Mids” Weed? [Explained for the Cannabis Rookie]