Marijuana is finally getting the positive international attention it deserves. It is now legal in two-thirds of American states for medicinal purposes. Also, it is federally legal in Canada for recreational use. As a result, cannabis use is transformed in certain locations.

The general public, and new users, in particular, should learn as much about the marijuana plant as possible. After all, knowledge is unquestionably powerful. For instance, how many people use cannabis either for medicine or recreationally? How many of them understand the part of the plant most responsible for the intoxicating effects?

The next time you see cannabis that is nearly mature or recently harvested, take a close look at it. Do you see those gorgeous minuscule crystals that cover the buds and leaves? They are called ‘trichomes,’ which comes from the Greek work trichoma (growth of hair).

It is trichomes that produce the terpenes and flavonoids found in marijuana. More importantly, they contain the cannabinoids responsible for the intoxicating effects of weed.

Why Do Cannabis Plants Have Trichomes?

The marijuana plant grows trichomes as a defense mechanism. Remember, weed has grown in the wild for tens of thousands of years and evolved to protect itself. When female plants start producing flowers, they are open to attack from animals, insects, and UV rays.

Trichomes are an effective defense. When a would-be predator tries to consume the plant, the potent cannabinoids cause them to get ‘high.’

Also, trichomes have a bitter taste and a powerful aroma. This prevents most insects or animals from going near the plant. Trichomes even protect the plant from fungal growth and high winds.

Trichomes contain THC and CBD, along with over 110 other cannabinoids. As you know, THC results in the intoxicating high that marijuana users enjoy. CBD is gaining prominence as potential means of helping with medical conditions without causing a high.

Moreover, the terpenes contained in trichomes are responsible for the unique smells of weed. For example, terpenes provide the beautiful tropical fruit taste and the scent of the Pineapple Kush strain.

Therefore, trichomes could help you get high and feel some relief from chronic pain. They also enable you to enjoy the taste and scent of cannabis.

How and When Trichomes Are Produced

After a few weeks, your crop is likely ready for the flowering stage. It is at this point when trichome production begins in earnest. When the marijuana plant starts producing flowers, trichomes appear on the outer surface. They start to transport plastids and vacuoles from their stalks in the gland’s head. Cells in the gland head metabolize and form the forerunner for cannabinoids.

Factors such as UV light play a significant role in the overall terpene and cannabinoid synthesis within the trichome’s head.

Using Trichomes to Determine When to Harvest

If you wait too long to harvest, the trichomes will turn amber or brown. At this stage, some of the THC has been converted into CBN. As a result, the high you experience will probably make you feel sleepy and relaxed.

However, not every marijuana strain’s trichomes turn milky white when ready for harvest. You must become familiar with the traits of any strain you grow before placing too much reliance on trichome color.

Trichomes are extremely fragile and volatile at all stages. It doesn’t matter if they are still on the vine or if the plant is already harvested. Exposure to excess heat, light, or oxygen can degrade or destroy trichomes. Also, their potency will fall if you wait too long to cure and dry the weed.

For the record, you find THC, CBD, and all the other cannabinoids in three specific trichome types. 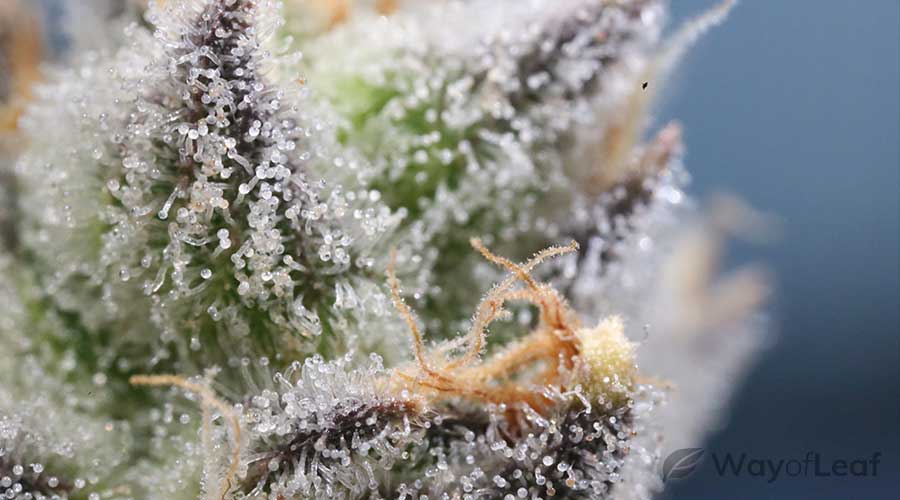 This trichome type is the tiniest of the three at just 10-15 microns. For the record, the width of human hair is approximately 40 microns. Bulbous trichomes appear on the surface of the whole plant.

These trichomes are slightly larger than their bulbous counterpart, and there are far more of them on the plant. Capitate sessile trichomes consist of a head and a stalk.

These trichomes are the largest and most abundant of the trio. Some of them achieve a size of up to 100 microns. This means it isn’t difficult to see them with the naked eye. Its waxy gland head is the main location for terpene and cannabinoid synthesis.

While all three trichomes produce cannabinoids, the capitate stalked version is the most abundant. You can see them around the calyxes of flowering marijuana plants. Their large size means they also produce the highest amount of essential oils.

According to some growers, flushing cannabis plants with ice water can increase trichome production. You need to complete the process in the last week or two before harvesting. In general, cultivators flush their plants to remove excess nutrients. It helps ensure that the cannabis doesn’t have a nasty fertilizer taste.

Why use ice water? Unfortunately, there is no scientific evidence that it boosts the number of trichomes on your plants. However, one theory suggests that it is an effective way to ‘stress’ your plants. Also, exposing your plants to lower temperatures stops the degradation of certain terpenes. This can happen during the final week of flowering.

Trichomes – The Home of Potent Concentrates

In the modern era, we are already spoiled. Breeders continue to create marijuana strains with THC contents of well above 25%. In the ‘golden age’ of weed, most cannabis sold and consumed contained far less than 10%. However, we’re not even satisfied with our 25% THC weed; we want more!

Concentrates such as kief, shatter, and wax contain over 70% THC, a level that can blow anyone’s mind. Trichomes contain the highest concentration of cannabinoids. Therefore, marijuana lovers are now learning how to separate the sticky THC-laden resin from the rest of the plant.

For example, you can create concentrates such as shatter, wax, and oil at home. The main thing you need is a solvent such as butane oil to separate trichomes from the plant. Also called BHO, butane hash oil is dangerous to make at home. Therefore, we would recommend using concentrates developed by professionals. Other extraction methods include ice water, alcohol, or the very expensive CO2 process.

When trichomes become dry, you can use a three-chamber grinder to collect what becomes known as ‘kief.’ Although it isn’t as powerful as a professionally made concentrate, it still hits 50% THC or more.

Experienced users know that it is worth their while to collect kief as a ‘treat.’ It also makes for a great emergency supply when all your marijuana is gone! You can sprinkle it on joints, add to a bowl, use it for moonrocks, or add to your coffee. Whatever you do, use it responsibly because it is VERY potent.

Make sure you take some time to appreciate the marvelous trichomes that grow on marijuana. As well as protecting the plant from predators, they contain the cannabinoids you need to get high. Trichomes also have the terpenes that make your weed smell and taste fantastic.

If you cultivate marijuana, make sure you don’t wait too long to harvest. If the trichomes turn brown, you no longer get the benefit of a powerful THC hit. In some cases, the trichomes could fall off, which is a disaster. Ultimately, you need to consume as many trichomes as possible to get the maximum benefit of marijuana.

Try grinding the trichomes to get kief. It is a potent form of cannabis that is sure to provide you with the intoxicating effects you desire.

You don't want to confuse the …