With all the hype that surrounds THC and CBD, the other 110+ cannabinoids in the marijuana plant seldom get a look in. Also known as phytocannabinoids, these compounds occur naturally in the plant and are usually concentrated in its trichomes. Generally speaking, cannabinoids are almost insoluble in water. However, they are soluble in alcohol, lipids, and a range of other non-polar organic solvents.

THC and CBD, along with CBN (cannabinol), are the most prevalent cannabinoids in the marijuana plant. As such, they have received the most significant level of study.

The assumption is that THC and CBD are the essential cannabinoids, and are responsible for most of cannabis’ effects.

However, the combination of the hundreds of cannabinoids and terpenes in marijuana is the reason for its apparent therapeutic effects. The so-called ‘entourage effect’ suggests that these compounds work better together than in isolation. Studies certainly support this theory insofar as the whole plant performs better than isolated THC or CBD, for instance.

This discovery has increased the level of interest in terpenes and the other cannabinoids in marijuana. Today, it is the turn of CBCV to fall under the spotlight.

The lack of research into marijuana cannabinoids is seen in the example of cannabichromevarin (CBCV). It was isolated from the marijuana plant by Shoyama et al. in 1975 but has not been examined to any serious degree since. Along with cannabigerovarin (CBGV), CBCV is one of a pair of propyl homologues of cannabigerol (CBG) and cannabichromene (CBC).

There have been severe restrictions on marijuana research in the United States, and indeed many nations around the world. Even in countries where research is permitted, a lack of funding means scientists must choose an area of study. The prevalence of THC and CBD in weed makes both cannabinoids an obvious starting point.

CBCV is only available in tiny amounts in most marijuana strains, which means research into it is minimal. What we know is that CBCV is related to CBC, and has a similar, albeit shorter, chemical structure. CBCV is a ‘propyl cannabinoid,’ which means its molecular structure contains a propyl chain. In case you were wondering, its molecular formula is C19H26O2.

Yet again, lack of research has hampered any chance of finding out more about this mysterious cannabinoid. The similarity in chemical structure with CBC means it likely shares comparable effects. As a propyl cannabinoid, it will share certain traits with its counterpart, but also has unique properties found in no other cannabinoid.

The severe lack of studies means we have to make assumptions based on what we know about CBC. For instance, CBC is potentially an antidepressant and could also have anti-inflammatory properties. CBC is also possibly an antibiotic and antifungal. This means it has a use as a treatment for fungal issues such as ringworm.

CBC doesn’t have intoxicating properties like THC, which means CBCV is likely to follow suit. Based on what we know so far about CBC and CBCV’s potential similarities, it could ultimately help with the following medical conditions:

Interestingly, the Regents of the University of California have patented an anticonvulsant drug for infants. While the prominent cannabinoid in this drug is CBD, CBCV and CBC are also ingredients.

What Else Do We Know About CBCV?

CBCV has possible side effects such as drowsiness, lightheadedness, dry mouth, and low blood pressure. Therefore, it isn’t a good idea to use it before operating heavy machinery. However, there isn’t much CBCV in any marijuana strain. Also, there isn’t enough information on the cannabinoid to try and create a drug that features it as the main ingredient. 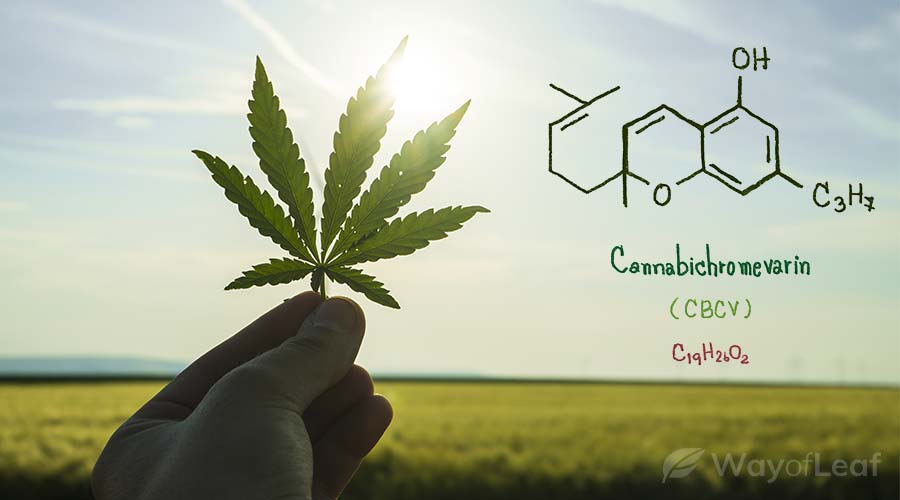 Marijuana strains such as 3 Kings and Jorge’s Diamond #1 contain CBC, so they possibly contain small amounts of CBCV also.

From Acid to Cannabinoid

CBCV is a cannabinoid compound that comes from an acid. It is important to remember that cannabinoids such as THC and CBD are not made directly from the marijuana plant. Instead, weed synthesizes several cannabinoid acids, which are decarboxylated (activated), typically by heat, to create the compounds we crave.

In CBCV’s case, it is CBCVA (cannabichromevarinic acid) that is produced by marijuana. Once you expose CBCVA to heat energy, it loses the ‘A’ and becomes a neutral cannabinoid rather than acidic. After decarboxylation, you end up with CBCV.

CBCV: There Is a Lot of Ground to Cover!

It is clear by now that we haven’t covered a small fraction of what there is to know about the marijuana plant. There are well over 100 cannabinoids and over 200 terpenes. Very few of them, including CBCV, are well-researched. Even the major cannabinoids, such as THC and CBD, require more detailed study.

A prime example of how far we have to go is evidenced by the endocannabinoid system (ECS). This system is well studied in comparison to individual compounds. Since the early 1990s, we know that the compounds in weed appear to interact with the CB1 and CB2 receptors.

Scientists believe there are more cannabinoid receptors, and now, researchers believe that GPR55 is the long-awaited ‘third’ receptor.

Scientists discovered it in 1999, but it was only in 2007 that Swedish scientists found it interacted with cannabinoids. What’s fascinating is that people with conditions such as Crohn’s disease have a higher level of GPR55 than average.

CBD seemingly blocks GPR55 activity, which is possibly a primary reason for the cannabinoid’s apparent anti-inflammatory properties. Once we learn more about these receptors, we can gain a greater understanding of how cannabinoids, even ‘minor’ ones like CBCV, impact the body.

The key to better future research is to end the prohibition of marijuana. If and when this happens, scientists will finally have the freedom they need. They can then conduct detailed clinical trials to learn more about marijuana, its compounds, and their effects on the human body.

In an ideal world, revenue from the legalization of the herb will fund this research. Until then, the functions of cannabinoids, such as CBCV, will remain a mystery.

21
8 min read
Join the discussion
TOC
Premium
Your subscription has ended
If you love cannabis and appreciate our content, join WayofLeaf Premium today and receive:
Best of all, part of your membership fee will go towards helping to legalize cannabis.
Go Wayofleaf Premium
No thanks, I can't afford it
I already have an account
×
Login in to your premium account