Transdermal CBD Patch: How They Work and Where to Buy One

There is a vast array of CBD products on the market. The ‘usual suspects’ include CBD oils, edibles, topicals, and e-liquids. CBD topicals are an innovative way of using the cannabinoid. The process involves rubbing cream on the affected part of the body. The thing about CBD creams, salves, and ointments is that they don’t reach the bloodstream.

A transdermal patch is different. You apply it to the skin, and it slowly releases the cannabinoids into the body. They ultimately reach the bloodstream. There are CBD transdermal patches on the market that work for up to 96 hours!

These products utilize a drug delivery system that is over 40 years old. In this article, we take a deep dive into the world of transdermal CBD patches. This includes details on how they work, the types of patch available, and the pros and cons.

What Is a Transdermal CBD Patch?

It noted that scopolamine was the first transdermal patch on the market. Released in 1979, scopolamine was for the treatment of motion sickness. Further patches appeared for conditions such as hypertension and chronic pain.

Perhaps the most famous use of the transdermal patch was for smoking cessation. Brands such as Nicorette have made a fortune by selling patches to smokers.

These patches slowly release nicotine into the body. As it is seemingly the most addictive drug in tobacco cigarettes, providing users with a nicotine hit helped them stop smoking.

The transdermal CBD patch is a relatively new product. It uses the old technology to provide users with a low but long-lasting amount of cannabidiol.

How Does a Transdermal CBD Patch Work?

The patch often resembles a sticking plaster and is infused with a measured amount of CBD. It is combined with permeation enhancers and carriers to improve bioavailability. CBD patches utilize a drug concentration gradient. The patch contains a relatively large amount of CBD. It naturally wants to spread to an area with a low concentration of CBD (the skin). 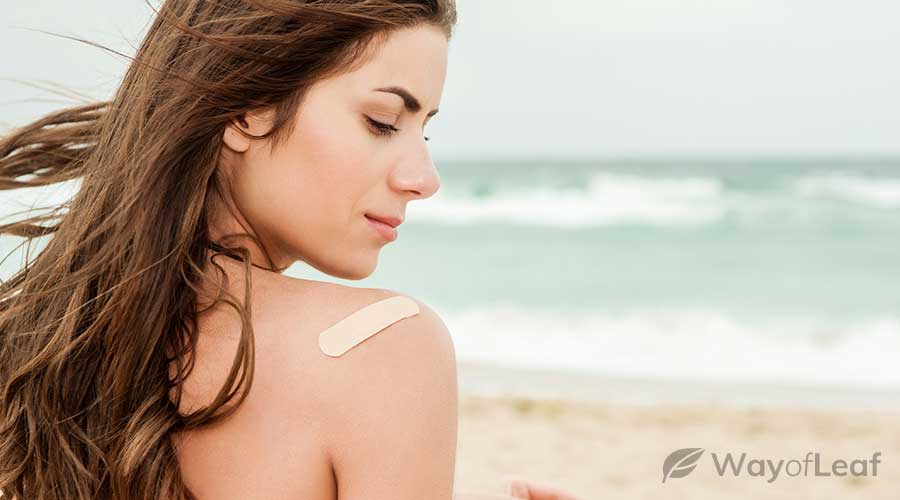 The gradient, from high to low concentration, pulls the CBD from the patch into the skin. Ideally, consumers will place it on a clean part of the body with a high vein concentration. This should facilitate a greater rate of absorption into the bloodstream.

The patches pass the CBD straight to the skin cells. Because cannabinoids are lipids, just like our cell walls, the CBD diffuses easily through the skin and travels to the blood vessels. In simple terms, the patches deliver cannabinoids to the bloodstream via the skin. The CBD reaches the endocannabinoid system (ECS). There, it binds with CB1 and CB2 receptors.

Transdermal delivery is relatively inefficient and slow. Human skin is extremely adept at keeping out toxins, contaminants, and compounds. As a result, some brands include permeation enhancers to help the CBD bypass the skin’s natural protective layers. Fortunately, the terpenes and essential oils found in hemp and cannabis act as natural permeation enhancers.

When you search for the best CBD patches, you typically have two options.

These CBD patches consist of five layers that protect the cannabinoid. There is a ‘peel-off’ layer, followed by the ‘matrix’ layer infused with cannabidiol. Then there are separating, adhesive, and protective backing layers. It is the adhesive layer that keeps the matrix layer on your skin. The CBD travels from the patch to the capillaries of your skin and then to your bloodstream.

These patches have the peel-off, adhesive, and protective backing layers. However, the permeable release membrane is crucial to the efficacy of this CBD patch type. Companies can alter the membrane to change the delivery rate of CBD. The result is a slow and steady release. This is in contrast to the matrix patch’s tapered release.

In general, the reservoir CBD patch is the superior option. They offer a more controlled release of cannabinoids.

How to Use Transdermal CBD Patches

In general, CBD patch sellers should provide detailed instructions. Consumers should read them carefully before use. Here is the usual process:

What Are the Benefits of Using Transdermal CBD Patches?

There are several reasons why a growing number of people use CBD patches. Let’s check out a few.

One of the puzzles that CBD product manufacturers must solve is the issue of bioavailability. This relates to the absorption rate of the cannabinoid. Orally consumed CBD has a bioavailability level of between 4% and 20%. This means if you consume 100mg of CBD edibles, a maximum of 20mg will make it to the bloodstream.

The bioavailability of topicals and transdermal CBD patches is significantly higher. A study published in Drug Development and Industrial Pharmacy in 2010 looked deeper into this issue. It found that topical and transdermal products had a bioavailability rate of around 45%. Products consumed intranasally had a rate between 34% and 46%.

The reason for the higher absorption rate is because the CBD in patches bypasses the liver and stomach. When you ingest cannabidiol products, they have to pass through both organs. They break down whatever goes into them, thus diluting the CBD.

Which are the leading brands? …

As long as consumers use a reputable brand, they know the patch has a proper pre-measured amount. For example, the PureKana patch has 60mg of CBD, which is released over 96 hours. This is the equivalent of 15mg of CBD per day.

Users can wear the CBD patch anywhere on the body, away from prying eyes. Once they apply it, there is no need to touch it until all the CBD is delivered. Consumers don’t have to carry around a CBD container or worry about using it in public. If they don’t like the taste of CBD products, patches offer yet another bonus.

What Are the Downsides of Using Transdermal CBD Patches?

No product is perfect, and transdermal CBD patches are no different. Here are a few things you may not like about them:

They Are Expensive in a Relative Sense

On a per mg of CBD per dollar basis, CBD patches are among the costliest products. It is common for a 60mg patch to cost around $18. This is the equivalent of paying $300 for 1,000mg of CBD. Oils and tinctures usually cost in the $100-150 range. Even allowing for greater bioavailability, patches are on the pricey side.

Related article
Why Is CBD so Expensive? [The TRUTH Revealed…]

CBD patches are great if you don’t mind that it takes hours for them to take effect. However, individuals using CBD for chronic pain may want something that acts faster. A prime example is vaping CBD e-liquid. Patches are also far from ideal if a condition causes the pain level to vary several times a day.

Awkward Sensation for Some

CBD patches are not a good option for those who generally find the sensation of things touching the skin irritating. Such individuals won’t enjoy the process of wearing a patch for four days!

If you fancy a slow and steady release of CBD, transdermal patches represent an exciting innovation. Apply one to clean skin, and let it run its course. You can still use other CBD products while you wear the patch. If you do this, please take note of how much CBD you are ingesting each day. For most people, transdermal CBD patches represent a convenient and discreet way to get a controlled amount of cannabidiol.

CBD Honey: What Is It Good For?

CBD Face Masks: Everything You Need to Know

CBD Chamomile Tea: What Are the Benefits?

Things to know before you buy

CBD Suppositories: Should You Be Trying Them?

What is a CBD Roll On and How Do You Use it?

A new way to use your CBD

Get the most out of your massage

CBD Bath Salts: Why Use Them and Why Could They Help?

For when a regular bath just isn't relaxing enough

All the information you need in one place

CBD Paste: What is it and Is it Worth it?

All you need to know about this awesome product

4
3 min read
Join the discussion
TOC
Premium
Your subscription has ended
If you love cannabis and appreciate our content, join WayofLeaf Premium today and receive:
Best of all, part of your membership fee will go towards helping to legalize cannabis.
Go Wayofleaf Premium
No thanks, I can't afford it
I already have an account
×
Login in to your premium account