Vitiligo is a long-term condition that involves pale white patches developing on the skin. Almost one percent of the global population has this medical issue. It is typical for the discolored areas to become larger over time.

Vitiligo can affect any part of the body, including the inside of the mouth and the hair. A lack of melanin production is one of the main reasons for vitiligo.

Much is made of cannabidiol’s capacity to help with an array of medical conditions. Can CBD oil help with vitiligo? Let’s find out.

When someone has vitiligo, it means the cells responsible for skin color, called melanocytes, are destroyed. The melanocytes become unable to produce the skin pigment, melanin. When these cells fail to produce melanin, parts of the skin either turn white or lose color. Vitiligo is a condition that affects people of all skin types. However, it is often more noticeable in individuals with darker skin.

Vitiligo is a condition that affects people of all skin types. However, it is often more noticeable in individuals with darker skin.

Although the condition can impact various parts of the body, it isn’t contagious. While it isn’t life-threatening, it is stressful and could cause an individual to view themselves negatively.

The most apparent symptoms of vitiligo are as follows:

Vitiligo may appear as a pale patch of skin initially. Gradually, it turns entirely white. The center of an affected area could be white with pale skin around it. The patch potentially looks pink if there are blood vessels beneath the skin. Vitiligo doesn’t generally cause skin discomfort, though it is occasionally itchy.

Although there is no defined age range, it is more common for individuals aged 30+ to get vitiligo.

There are several forms of vitiligo. However, two types make up the majority of cases.

Also called localized or unilateral vitiligo, segmental vitiligo involves the white patches only affecting one part of the body. Though it is the second most common form of the disease in adults, it is the most prevalent in children. It could affect up to 30 percent of children that have vitiligo.

Also called generalized or bilateral vitiligo, this form of the disease involves symmetrical white patches on both sides of the body. These patches can appear on the:

Non-segmental vitiligo affects up to 90 percent of people with the condition.

Research has yet to determine what causes melanocytes to disappear from the affected parts of the skin. The majority of people with vitiligo don’t have a family history of the condition.

In 2007, the National Institutes of Health issued a press release. It cited research from the New England Journal of Medicine. The study stated that approximately 20 percent of people with vitiligo also have at least one other autoimmune disorder. The most common examples include:

The following events may trigger vitiligo:

When it comes to selecting the best and most effective CBD, it really comes down to trial and error and testing out as many products as you can. And that’s exactly what we did. Our review team tried and tested dozens of CBD brands, and we rated FabCBD as #1 overall for potency, value for money, quality & reputation. Try them today and you won’t be disappointed. You can also view the reviews of the best CBD brands here.

What Are the Current Treatments for Vitiligo?

The range of vitiligo treatments varies depending on factors such as:

Here are a few examples of possible vitiligo treatment options:

Is CBD Oil Good for Vitiligo?

At present, there is minimal research that specifically looks at CBD oil’s effect on vitiligo. One study, published in Molecules in March 2019, looked at CBD’s therapeutic potential on skin disorders.

One section of the research focused on melanocytes and pigmentation disorders. The researchers suggested that endocannabinoid signaling could exert a complex regulatory role in melanocytes. However, the team also pointed out that the results are highly model-dependent.

What’s fascinating is that the study outlined the possibility of endocannabinoid system dysregulation contributing to vitiligo development. The researchers described it as a bold hypothesis that requires further study. 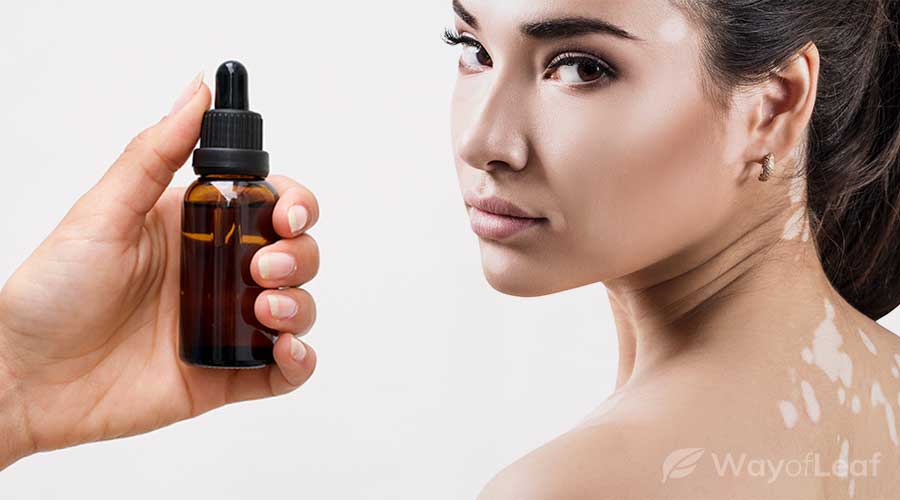 Another interesting development is the patent applied for by APIRx Pharmaceuticals. It aims to test a form of treating vitiligo that involves a topical application consisting of several cannabinoids. However, the main ones are CBD and CBG.

Otherwise, patients may use CBD oil to help with any anxiety or depression after developing vitiligo.

A study published in BJGP Open in May 2020 looked at CBD prescription in clinical practice. The researchers focused on the first 400 patients to receive cannabidiol via prescription in New Zealand. The study aimed to measure any improvements in patient quality of life.

It found that those who used CBD reported a 13.6-point increase in quality of health. Crucially, patients with depression saw major improvements in symptoms. Perhaps one could use CBD oil to help with vitiligo-related anxiety or depression?

How to Use CBD for Vitiligo

There are several options when using CBD for vitiligo. Patients can try CBD oils, edibles, or vape pens. However, perhaps the best option is to use a CBD topical as it is a skin issue.

There are various options, including ointments, salves, lotions, and creams. The main difference is in the thickness of the product. This tends to boil down to the amount of water used in making the topical.

There are various options, including ointments, salves, lotions, and creams.

Using a CBD cream for vitiligo is easy. Rub the cream liberally on the affected area. Most CBD brands recommend waiting at least an hour before assessing the effects. People living with vitiligo may benefit from applying CBD cream every 3-4 hours. Begin with a relatively small amount, and increase as necessary.

Final Thoughts on CBD for Vitiligo

At the time of writing, there is no clinical research that outlines CBD oil’s possible efficacy for vitiligo. However, this situation may change in the next few years. As CBD seldom causes adverse effects, most vitiligo patients may feel it is worth trying. This is especially the case if other options have had no positive impact.

Regardless, it is unwise to consider using CBD for vitiligo without consulting a physician first.

16
6 min read
Video
Join The Discussion
TOC
Premium
Your subscription has ended
If you love cannabis and want to support our site, join WayofLeaf Premium today and unlock
Best of all, part of your membership fee will go towards supporting the fight to legalize cannabis.
Sign Up for WoL Premium
Not now
I already have an account
×
Log in to Your Premium Account