Back in April 2020, a study was published that claimed CBD down-regulated the ACE-2 receptor and transmembrane serine protease 2 (TMPRSS2), both of which are involved in the mechanism by which COVID-19 enters cells. This study, from the University of Lethbridge in Alberta, Canada, found 13 high-CBD cannabis extracts that down-regulated ACE2 gene expression and ACE2 protein levels. They also found that some strains down-regulated serine protease TMPRSS2.

At first glance, this sounded extremely promising. However, as this was a massive claim being made in a non-peer reviewed journal, some of the researchers’ peers stepped up to review it themselves – and they found a number of issues.

At least three PhD-level researchers have pointed out inconsistencies in the data, issues with the study design, and questions of credibility owing to the fact that the study was funded by two startups in the cannabis industry who would stand to gain from a potential CBD-related COVID-19 remedy.

But while that non-peer-reviewed study garnered a lot of attention, there have been many other peer-reviewed studies that also point toward multiple avenues by which CBD could have utility in fighting both COVID-19 and related symptoms. This article will break down those studies and examine the many fronts on which CBD may be useful in the battle against coronavirus.

A group of researchers from Italy, Spain, and China have authored a hypothesis letter to the British Journal of Pharmacology proposing a number mechanisms by which CBD may limit the severity and progression of SARS-CoV-2. They pointed out that in two different studies, Ribeiro et al found cannabidiol to have significant anti-inflammatory effects in acute lung injury.

Specifically, the above studies found that CBD reduced leukocyte migration into the lungs, decreased the production of pro-inflammatory cytokines and chemokines, decreased myeloperoxidase activity in lung tissue, and reduced the amount of protein in bronchoalveolar lavage fluid. The researchers argue that since CBD showed such anti-inflammatory effects in those lung injury models, it may well be able to attenuate the deleterious inflammatory effects of COVID-19 on lung tissue.

In July 2020, yet another study was published that showed CBD to have similar pulmonary effects. However, this time the study focused on acute respiratory distress syndrome (ARDS) instead of acute lung injury. The researchers also found CBD to ameliorate the clinical symptoms of ARDS. As ARDS is the leading cause of COVID-19 mortality, the possibility that cannabidiol may be protective against ARDS suggests that it could have life-saving potential.

The hypothesis letter went on to suggest CBD may be a viable weapon against SARS-CoV-2 due to possible antiviral effects. This sentiment was echoed by Harvard physician Kevin P. Hill, M.D., M.H.S. in an article published in the journal Cannabis and Cannabinoid Research. Dr. Hill stated that while no studies have yet been done on the specific antiviral abilities of CBD on COVID-19, nor on any of the members of the coronavirus family, he pointed to three studies in which cannabidiol was shown to have either antiviral effects against other viruses, or to reduce deleterious inflammation due to those viruses. 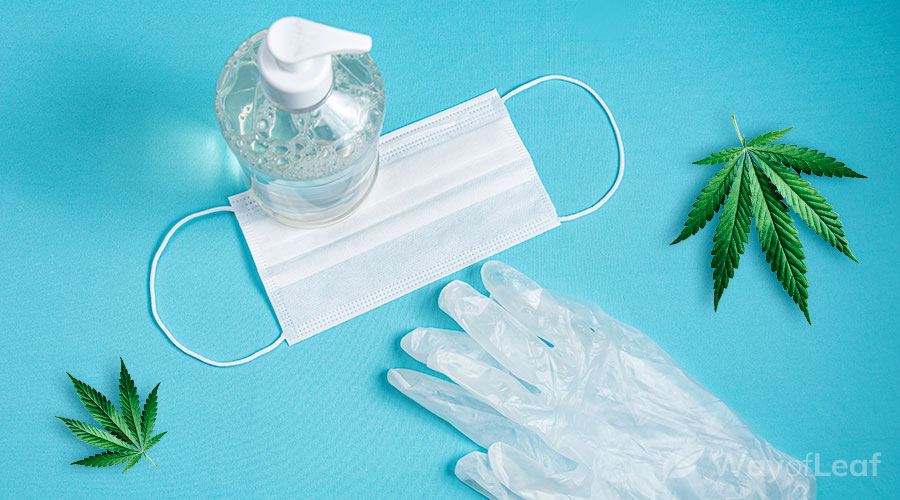 Next, he pointed to a study in which researchers studied the effects of cannabidiol on Kaposi’s sarcoma-associated herpesvirus (KSHV). They found that while CBD did not slow down KSHV’s ability to infect endothelial cells, it was able to reduce proliferation and induce apoptosis of previously-infected cells.

Finally, Dr. Hill cited a study on the effects of cannabidiol on Theiler’s murine encephalomyelitis virus-induced demyelinating disease (TMEV-IDD) in mice with multiple sclerosis. The study found that CBD worked through multiple avenues to reduce inflammation in this setting, including decreasing the transmigration of leukocytes by “downregulating the expression of vascular cell adhesion molecule-1 (VCAM-1), chemokines (CCL2 and CCL5) and the proinflammatory cytokine IL-1β, as well as by attenuating the activation of microglia.” It was also noted that CBD’s effects were long-lasting and led to a reduction in motor deficits in the chronic phase of the subjects’ multiple sclerosis.

To further evaluate this hypothesis, researchers at the University of Maryland School of Medicine have begun a study to investigate the specific antiviral effects of CBD against SARS-CoV-2. As above, the focus of the study will be on the anti-inflammatory effects of cannabidiol in the setting of COVID-19 that can lead to respiratory failure, the reported cause of death in around 70% of fatalities due to the virus.

Authors of the hypothesis letter also raised the possibility that cannabidiol may be able to prevent the pulmonary fibrosis that can be seen as a sequelae of COVID-19 infection. They point to a study that suggested that PPARγ agonists can inhibit the development of pulmonary fibrosis.

In a recent review of the findings on neurological damage done by COVD-19, Wu et al began by relating the damaging neurologic effects of two other coronavirus conditions, SARS-CoV and MERS-CoV. SARS-CoV patients had been found to suffer from polyneuropathy, encephalitis, cerebral edema, and meningeal vasodilation, along with evidence of ischemic changes in neurons and demyelination of nerve fibers. MERS-CoV had led to seizures, paralysis, ischemic stroke, Guillain-Barre syndrome, and “disturbance of consciousness.”

So far, those treating SARS-CoV-2 (COVID-19) have reported finding headache, epilepsy, and disturbed consciousness, along with loss of smell or taste. There have been reports as well of viral encephalitis due to COVID-19, as well as findings of infection of the cerebrospinal fluid by the virus.

In this review, the authors suggested a number of mechanisms by which SARS-CoV-2 can affect neurological damage, including through direct virus infection injury, hypoxia/ischemia injury, injury due to inflammation, and by affecting ACE2. As noted above, CBD is well-known for its ability to curb inflammation, which is one mechanism by which it may help on the neurologic front.

However, one of the first and best-researched effects of CBD is its ability to slow neurodegeneration. In fact, the US Department of Health and Human Services holds a patent on cannabinoids, including CBD, as neuroprotectants. The patent reads, “…cannabinoids are found to have particular application as neuroprotectants, for example in limiting neurological damage following ischemic insults, such as stroke and trauma, or in the treatment of neurodegenerative diseases, such as Alzheimer’s disease, Parkinson’s disease and HIV dementia.” These neuroprotective benefits are yet another means by which CBD may be of use in treating COVID-19 and its neurological sequelae.

CBD Can Also Help with the Indirect Effects of COVID-19

As the coronavirus pandemic continues on, one of the biggest issues that has plagued society is the lack of certainty. There is ever-changing information about how it is spread, how to protect against it, and how to treat it. This all leads to further uncertainties, like when businesses or schools will be open or whether certain activities are safe or not. Combine all of this with the prevalence of unemployment, economic uncertainty, and loss of connection, and it becomes a recipe for pervasive anxiety.

This anxiety is evident among those currently and formerly suffering the physical effects of COVID-19, as well as those that are unaffected by the virus itself. CBD has well-documented anxiolytic properties, and it has been gaining popularity for use by anxiety sufferers for both acute and chronic instances of anxiety. This makes CBD a helpful tool for those seeking a natural remedy to ameliorate some of the day-to-day anxieties associated with the above-referenced pandemic conditions.

The Definitive Guide to CBD Oi…

However, the power of cannabidiol to combat anxiety may also extend to those whose anxiety is a direct result of the coronavirus itself. A 2016 article in the International Journal of Infectious Disease outlined how patients recovering from Ebola often had anxiety that was hypothesized to be due to lasting inflammatory effects and/or autoimmune effects from the illness. Authors hypothesized that CBD could be of significant help in these situations thanks to its anti-inflammatory effects. More recently, an article in the journal Brain, Behavior, and Immunity suggested that patients recovering from COVID-19 may suffer anxiety in the same fashion, and suggested that CBD’s antiinflammatory properties could be similarly effective in those cases.

Since CBD is, per the World Health Organization, “generally well tolerated with a good safety profile,” it is one of the most benign and least toxic means of addressing many of the issues above. Side effects are generally mild, there is no addictive property to CBD, and, unlike its counterpart THC, it is non-intoxicating. This beneficial safety profile, combined with the many ways it may be effective in combating COVID-19 and its related effects, makes CBD a candidate worthy of much further investigation.

CBD Gummies Dosage: How Much Should You Realistically Consume?

CBD Edibles vs. CBD Oil: Which is Best?