Polycystic ovary syndrome (PCOS) is a widespread gynecological condition. Figures suggest that it affects as many as 1 in 10 women of childbearing age. It is a major cause of female infertility, and also causes a range of other symptoms.

In this article, we take a closer look at PCOS and whether CBD oil could help.

PCOS: What Is It?

PCOS causes many tiny cysts to form in the ovaries. These cysts form when the follicle fails to release an egg during ovulation due to a hormonal imbalance.

PCOS can vary significantly in its severity. Some women never know they have the condition until they experience fertility issues. Others are afflicted by a variety of symptoms that plague their daily lives.

The symptoms of PCOS vary from woman to woman. Some of the most common include:

Women with PCOS are at risk of diabetes, high blood pressure, high cholesterol, sleep apnea, and endometrial cancer. They may also suffer from mood disorders like anxiety and depression.

An imbalance in the sex hormones causes PCOS. All women produce some androgens (male sex hormones) in addition to their female sex hormones. However, women with PCOS produce more androgens than usual. This leads to symptoms such as acne and hirsutism. Further hormonal imbalances prevent ovulation from occurring as it should. This causes missing periods and cyst formation around the ovaries.

Further hormonal imbalances prevent ovulation from occurring as it should. This causes missing periods and cyst formation around the ovaries.

Finally, women with PCOS often suffer from insulin resistance. This causes weight gain and other metabolic problems. It also increases the risk of diabetes and heart disease later in life.

These hormonal imbalances are extremely complex, and scientists are still trying to understand precisely why they occur. It appears that they are the result of dysfunction in the hypothalamic-pituitary-ovarian (HPO) axis, which is how the hypothalamus, pituitary gland, and ovaries use hormones to communicate and regulate the menstrual cycle.

The most common PCOS treatments include medication to regulate the menstrual cycle or trigger ovulation in women who are trying to conceive. Doctors may also prescribe metformin (an anti-diabetic drug) for women with insulin resistance. Also, anti-androgenic medications may help manage symptoms such as acne and hirsutism.

For some women, especially those trying to become pregnant, surgery may be necessary. A procedure known as ovarian drilling can help to trigger ovulation if medication has failed.

Other women might find that lifestyle changes, such as exercising regularly and eating well, are enough to manage their symptoms.

Does CBD (Cannabidiol) Have the Potential to Help PCOS?

CBD has become extraordinarily popular in recent years, but could it help women with PCOS?

Unfortunately, the answer is not straightforward.

CBD works by interacting with the body’s endocannabinoid system (ECS). The ECS is responsible for maintaining homeostasis (balance) within the body. It plays a role in controlling mood, movement, appetite, immunity, and blood pressure, among other things. It also appears to help regulate the reproductive system. 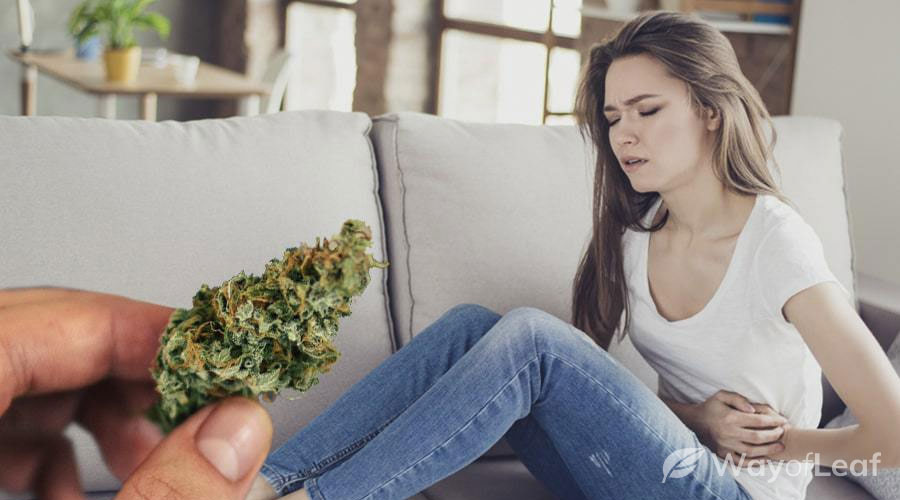 The ECS is a combination of cannabinoid receptors and chemicals called endocannabinoids. These chemicals and receptors bind together to trigger a variety of responses throughout the body.

Two of the most well-studied cannabinoid receptors in the ECS are CB1 and CB2. Researchers have discovered these receptors in most of the body’s tissues, including the ovaries. They believe that the ECS plays a role in egg development, ovulation, and the secretion of sex hormones. It probably does this by influencing the HPO axis.

CBD has a powerful effect on the ECS. It can alter the way endocannabinoids bind with CB1 and CB2 receptors. Therefore, it may have a significant impact on reproductive function. But is this good news for PCOS?

The Endocannabinoid System and PCOS

A 2015 study for Fertility and Sterility compared fatty tissue from 20 women with PCOS and 20 healthy women. The authors found that women with PCOS had higher levels of the endocannabinoids anandamide (AEA) and 2-arachidonoylglycerol (2-AG). They also had a higher expression of CB1 and CB2 receptors in their cells.

These results suggest that the ECS plays a role in the development of PCOS and insulin resistance. A 2019 paper for the Journal of Ovarian Research supports this theory. The authors of this piece suggest that the influence of the ECS on PCOS may be as follows:

It is important to note this is currently just a theory. However, it may be useful to consider this theory when it comes to the action of CBD.

One of CBD’s effects on the ECS is slowing the breakdown of AEA and raising its levels in the body. If the above theory is correct, this could mean that CBD has a negative impact on PCOS.

However, CBD also acts as a ‘negative allosteric modulator’ at CB1 receptors. This means that it changes the shape of the receptors, making it harder for molecules to bind with them. It could, therefore, potentially block some of the activity of AEA at CB1 receptors.

Until more research is conducted, it is difficult to know for sure whether CBD helps or hinders PCOS. However, it could potentially relieve some of its symptoms.

Although the exact effects of CBD on the development of PCOS are unclear, it could benefit some of its symptoms.

Women with PCOS may suffer from lower abdominal pain. This could be due to menstruation, ovulation, or ruptured cysts. Pain is one of the primary reasons why people use CBD, and it could potentially help PCOS pain, too.

Learn more about how CBD relieves pain in our related article: CBD Oil for Pain Management

Another common reason why people use CBD is to ease anxiety, depression, and mood swings. It is especially well-known for its anti-anxiety properties. Many women with PCOS suffer from anxiety.

For more on CBD for anxiety, see our article: Will CBD Cure Anxiety [Myths vs Facts]

Research has shown that CBD can help to reduce sebum production and inflammation in acne. It may be best to use CBD topically for acne, applying it directly to the skin. Many CBD topicals also contain other soothing ingredients to enhance its effects further.

Here’s more on how CBD could benefit acne symptoms: CBD for Acne [Things to Know Before You Try]

Numerous scientists have studied how CBD and other cannabinoids like THC and THCV affect body weight and insulin sensitivity. According to the research, THCV appears to have an especially positive effect. You may be able to find this cannabinoid in some brands of full-spectrum CBD oil and other cannabis products.

This is perhaps one of the most significant benefits of CBD for PCOS. Increased body weight and insulin resistance play a large part in the development of the condition. Therefore, anything which helps to manage these issues could potentially be of value.

You can find more information on how cannabinoids affect body weight in our article: CBD for Weight Loss: Is it a Scam?

It seems that the ECS plays a large part in the development of PCOS and its symptoms. Therefore, cannabinoids like CBD are likely to have a significant impact on the condition. However, until further evidence emerges, it remains unclear whether this impact is positive or negative. Research does suggest that CBD could help with some of the symptoms of PCOS.

Research does suggest that CBD could help with some of the symptoms of PCOS.

However, if you suffer from PCOS and want to try CBD, we recommend consulting your physician or gynecologist first. This is especially important if you take any medication, as CBD has the potential to interact with many different drugs.

You should also consult a medical professional if you want to take CBD and are trying to become pregnant. The effects of CBD on the developing fetus are still largely unknown. Therefore, the Food and Drug Administration strongly advises against its use during pregnancy.

Although many people state that CBD is safe, like any medicine, it is not entirely free from risks. Therefore, CBD oil for PCOS should not be seen as a substitute for regular medical care.