CBD for Parkinson’s Disease – Is It Viable?

Parkinson’s disease is a common neurodegenerative disease of the central nervous system. It affects around 10 million people worldwide. Despite being well-known and heavily researched, there is sadly not yet a cure for the debilitating condition.

In America alone, as many as 1 million people suffer from the condition. Despite a range of treatments being available, there seems to be nothing that offers risk-free relief.

Over recent years, there has been much research into marijuana, emphasizing CBD as a potential therapy for Parkinson’s disease. However, can CBD really be used for this serious condition?

We have put together a detailed guide about CBD oil for Parkinson’s disease in this article. Hopefully, the information can help readers determine whether cannabis extract may be an alternative solution for them or a loved one.

What Is Parkinson’s Disease?

Parkinson’s disease was first brought to light back in 1817 by the condition’s namesake, a UK doctor called James Parkinson.

Since discovering the disease, scientists have spent years researching its nature. They are still attempting to understand what causes it and how we can treat it. Up to now, there is still no cure for this debilitating condition. However, we know much more about Parkinson’s than ever before, thanks to ongoing research.

Although there is still no cure, recent research has revealed much more about Parkinson’s.

Parkinson’s disease is a condition that progressively gets worse over time. It is caused by a loss of nerve cells in the brain. The condition can present itself in many ways, and symptoms vary depending on severity. 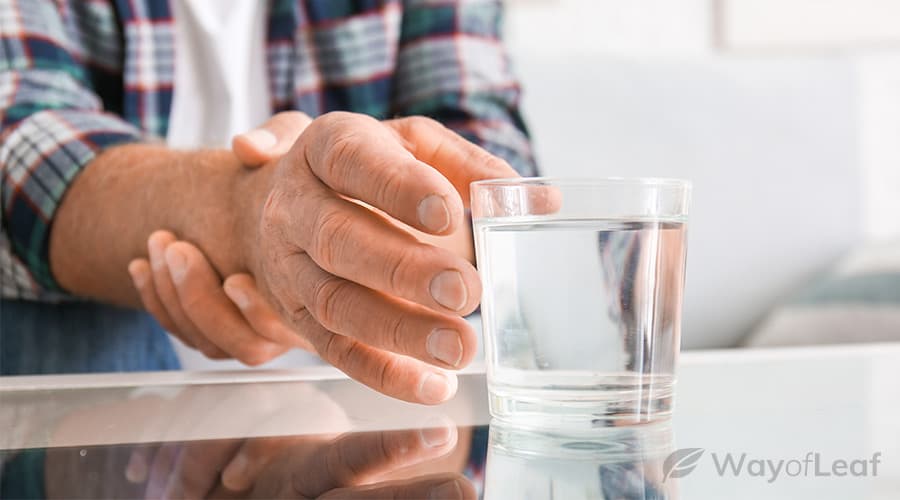 Some primary symptoms of Parkinson’s disease include:

We now know that Parkinson’s disease arises from damage to the brain, particularly the loss of nerve cells in a midbrain region called the substantia nigra. However, there is still uncertainty in terms of what causes the cell damage in the first place. Some experts believe nerve damage occurs through environmental and genetic factors, although this is still being looked into.

Treatment for Parkinson’s is mostly reliant on pharmaceuticals such as levodopa. This drug works to target depleted dopamine levels in the brain.

However, much like the rest, this medication has serious potential risks that put many patients off. For instance, levodopa can stop being effective over time and can cause symptoms to worsen as the condition progresses.

There are other options out there for patients, such as physiotherapy. This type of treatment can help with recovering from movement issues. In some severe cases, brain surgery is even an option.

However, there is yet to be a drug or therapy that doesn’t come with risks and side effects. As we are discussing, these side effects can exacerbate the situation and sometimes even do more harm than good.

CBD for Parkinson’s: What Does the Research Say?

A growing number of states allow the use of medical marijuana. Furthermore, CBD from hemp is broadly tolerated in virtually every state. As a result, people have easier access to cannabidiol products than before.

However, is CBD oil for Parkinson’s disease a realistic and viable treatment option? 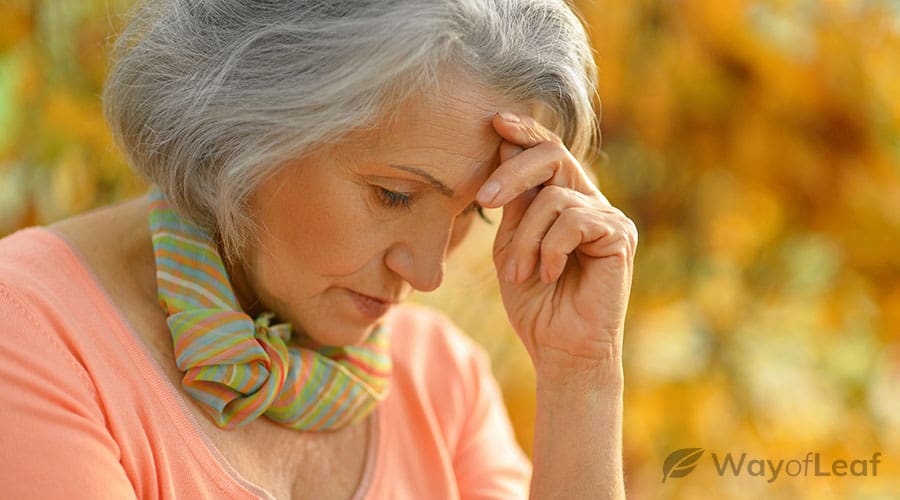 From research, we know that CBD has potential antioxidant, anti-inflammatory, and neuroprotectant properties. Few people know that the U.S. government patents these specific properties. Moreover, other studies show that CBD may help with:

So, with these things in mind, is it possible that CBD oil for Parkinson’s disease could be a realistic alternative treatment option?

Well, science has suggested that it could help in a big way. Most states with a medical marijuana program have included Parkinson’s on their list of qualifying medical conditions.

Marijuana was referenced as a treatment for Parkinson’s in the 19th century, where it was mentioned in the authoritative clinical volume Manual of Diseases of the Nervous System.

Since then, we have seen dozens of studies and anecdotal reports showing evidence that cannabis – particularly CBD – may have a fast-acting effect on the disease.

The Endocannabinoid System and CBD

Like many conditions, we can trace some of the underlying issues of Parkinson’s disease to the endocannabinoid system, or ECS – our internal regulator and a natural cannabinoid-producing machine.

Among other things, the endocannabinoid system plays a crucial role in maintaining a balanced and healthy body. However, it can become “faulty,” and this is where problems tend to occur.

In the case of Parkinson’s disease, it is the role of the ECS to regulate the lifespan of cells. If cellular damage occurs, it can have a direct impact on neurons. The health of these neurons is mandatory to prevent the onset of Parkinson’s.

It’s known that the ECS has a lot of control over our central nervous system. Brain cell loss can occur when the CNS becomes affected, and it can be incredibly hard to come back from.

The ECS has significant control over our central nervous system (CNS). When it becomes affected, the result is potential brain cell loss, which is hard to recover from.

So how can CBD help our ECS combat the nerve cell loss that brings about many of the severe symptoms of Parkinson’s?

CBD Has Neuroprotective and Antioxidative Properties

It largely comes down to CBD’s strong neuroprotectant and antioxidant abilities. The cannabinoid works to neutralize the free radicals that lead to oxidative stress, which is recognized as one of the primary precursors to Parkinson’s disease.

A study published in 2014 by scientists from the Department of Neurology in Tel Aviv, Israel, looked at how cannabis could address a range of motor and non-motor symptoms in Parkinson’s patients. The study looked at 22 subjects with Parkinson’s disease; all were evaluated on various clinical aspects 30 minutes after smoking marijuana. The researchers mainly looked at the following areas:

The study found significant improvement in many areas. The mean total motor score on the Unified Parkinson Disease Rating Scale dropped from 33.1 to 23.1 after the patients smoked cannabis. Other motor symptoms revealed improvement in areas like tremors and rigidity. Interestingly, there was also a vast improvement in pain and sleep scores for all 22 patients. This suggests that marijuana is a potentially useful option for Parkinson’s disease.

Is CBD a Better Option Than Marijuana for Parkinson’s?

Although the above research is promising, using marijuana to address the symptoms of a condition has downsides.

The risks of smoking and the inevitable intoxicating component are considerable downfalls for many patients. For these reasons, CBD has taken precedence as a medicinal option in place of marijuana as a whole. It offers many of the health benefits of whole-plant marijuana without producing any of the associated high.

CBD looks to be useful in helping with many of the motor issues that come with Parkinson’s disease. In addition, a study published in 2009 by the Department of Neuropsychiatry and Medical Psychology revealed that the cannabinoid could also help with the onset of psychosis in some Parkinson’s patients.

The study looked at six outpatients with Parkinson’s disease who had psychosis for at least three months. All six subjects received an oral dose of CBD. Doses began with 150 mg a day for four weeks alongside their usual treatment.

After this period, the subjects had their psychotic symptoms evaluated. Results showed a significant decrease in symptoms. The total scores of all six patients showed improvement with no adverse effects. Furthermore, CBD did not worsen the motor functions of the subjects.

Along with the scientific evidence, there are also countless anecdotal reports of people whose lives have been turned around by CBD. Although it is certainly not guaranteed to work on the same level for all patients, most CBD oil users seem to reap the benefits of the cannabinoid.

Moreover, on top of the direct effects of Parkinson’s, CBD has also been shown to have potential medicinal benefits for those who have insomnia, depression, or anxiety. All of these issues are byproducts of Parkinson’s disease.

Related article
Where Are CBD and THC Found in the Cannabis Plant?

What Dosage of CBD for Parkinson’s Should One Consume?

As CBD is not an FDA-approved drug, there are no official dosing recommendations. We can only outline what previous research has shown regarding efficacy and safety. A 2014 study published in the Journal of Psychopharmacology involved 21 PD patients who didn’t have dementia or comorbid psychiatric conditions.

The participants were separated into three groups who consumed either a placebo, 75mg of CBD a day, or 300mg of CBD per day. Those who used the 300mg dosage showed higher scores on the wellbeing and quality of life scale. The researchers did not mention any side effects from this level of consumption.

A 2020 study published in Cannabis and Cannabinoid Research aimed to determine the safety and tolerability of CBD in Parkinson’s disease. The 13 participants received Epidiolex (100mg/ml) at rates ranging from 5 to 20-25mg/kg/day. Therefore, someone weighing 80kg (approximately 176 pounds) may have received up to 2,000mg of CBD via Epidiolex daily.

Patients began with 5mg/kg/day, and the dose was increased by up to 5mg/kg/day every fourth day until the maximum intended dose was achieved.

Five patients who consumed 20-25mg/kg/day had elevated liver enzymes, though only one was symptomatic. Overall, three participants dropped out of the study due to intolerance. Eighty-five percent of patients reported diarrhea, 69% reported somnolence, and 62% reported fatigue. Other adverse effects included weight gain, dizziness, and abdominal pain.

Therefore, extremely high doses of CBD could lead to adverse effects in PD patients. Consequently, it is wise to begin with a relatively small dose and increase it gradually as tolerance allows.

CBD for Parkinson’s Disease: Is It Safe to Use?

The research outlined above suggests that excessive levels of CBD could cause side effects in Parkinson’s patients. The Cannabis and Cannabinoid Research study said there were no serious adverse events and no withdrawal symptoms.

High levels of CBD could cause side effects in some Parkinson’s patients, so it’s important to exercise caution.

Meanwhile, a study published in Current Drug Safety in 2011 suggested that “high doses up to 1,500 mg/day of CBD are reportedly well tolerated in humans.”

Perhaps a bigger issue than excessive CBD consumption is its propensity to interact with over-the-counter and prescription medications. Enzymes break down many drugs in the liver. CBD can interfere with these enzymes, meaning that not enough or too much of the drug gets into the body. Known as altered concentration, this scenario can lead to an increased risk of side effects or the drug not working as intended.

CBD is not an approved medication for Parkinson’s. As is always the case, anybody thinking of changing or stopping a current treatment should first consult with a medical professional.

That said, the research and first-hand reports of CBD oil for Parkinson’s disease are promising. While some reviews are mixed, the consensus seems to be an altogether positive one. Here is hoping for a cure in the not-so-distant future!

16
6 min read
Video
Join the discussion
TOC
Premium
Your subscription has ended
If you love cannabis and want to support our site, join WayofLeaf Premium today and unlock
Best of all, part of your membership fee will go towards supporting the fight to legalize cannabis.
Sign Up for WoL Premium
Not now
I already have an account
×
Log in to Your Premium Account