Researchers define motion sickness as extreme dizziness and nauseousness that occurs as a consequence of movement through space. Individuals typically experience this phenomenon during a car, train, or boat ride. Motion sickness affects untold numbers of people worldwide. And while it’s not life-threatening, it can cause significant discomfort.

According to the U.S. National Library of Medicine, around 33% of people are ‘highly susceptible’ to motion sickness.

Motion sickness may occur more commonly in specific groups of people for reasons that researchers are unable to determine. For example, women are more likely to get motion sickness than men. Also, individuals who suffer from migraines, including vestibular migraine (a balance disorder), are at higher risk.

There are remedies available for motion sickness, but prescription medication can have severe side effects. In recent times, research suggests that CBD could be a viable alternative for addressing some symptoms. The science behind these claims will be examined and discussed.

Motion sickness does not have one definite cause, and the triggers can vary for sufferers. Some individuals can ride on a plane unaffected while others may feel sick in the same circumstance.

Motion sickness can occur at any age but is more common in children aged two and over. While most people outgrow the issue, some do not.

Motion sickness occurs when conflicting messages are sent to the central nervous system. A prime example is if a person feels dizzy trying to read a book while traveling in a car. Their skin receptors and inner ear sense the motion, but their eyes are only registering the book’s stationary pages. This conflicting information results in nausea, dizziness, and vomiting in some cases.

The above is a relatively simple explanation. Still, according to a 2014 article by James R. Lackner, published in Experimental Brain Research, motion sickness is “more than nausea and vomiting.” He described the condition as a ‘complex syndrome’ that involves far more features than vomiting and nausea. According to Lackner, sleep deprivation could enhance susceptibility to this condition.

In the paper, Lackner mentioned other symptoms of motion sickness.

Interestingly, Lackner also wrote about how ‘sopite syndrome’ is a facet of motion sickness that is seldom recognized. This syndrome describes the persistent fatigue and drowsiness that follow brief exposures to low-intensity motion stimulation or ‘highly provocative’ stimulation. The syndrome may also include yawning and can last for hours or even days. Lackner also believes that most motion sickness cases go unrecognized, which means 33% may be a conservative estimate.

In most cases, motion sickness is mild and self-treatable. If motion sickness sufferers experience a severe episode that threatens to worsen, they may need to see a specialist in the field of ear diseases, balance issues, and the nervous system. When trying to diagnose the condition, a physician will ask about symptoms and attempt to determine when a patient experiences the problem.

Related article
Can You Travel with CBD? [The Accurate Answer]

Conventional Motion Sickness Treatments & Their Side Effects (NOT CBD)

There is a significant variety of over-the-counter (OTC) medication options such as Marezine, Benadryl, Dramamine, and Bonine. Consumers are supposed to take these drugs up to 60 minutes before traveling. Each of the medications listed above is an antihistamine, and the main side effect is drowsiness. As a result, those with motion sickness can’t take them if they drive or operate heavy machinery.

Other medications include scopolamine, one of the most regularly prescribed medications, which needs to be used before the symptoms begin. Sufferers can also purchase scopolamine in patch form, which needs to be placed behind the ear 6-8 hours before they are due to travel. Side effects include dizziness, agitation, sleepiness, dry mouth, sore throat, and dilated pupils.

There is also promethazine, which is usually taken two hours before travel, and its effects can last up to 8 hours.

Finally, cyclizine is a medicine that works best when used 30 minutes before travel. Its side effects are similar to those of scopolamine.

There is no known cure for motion sickness, although people can prevent it and address the symptoms. The best form of treatment is prevention, which means people should not engage in reading while traveling. They should keep their eyes focused ahead and sit in areas with the least amount of motion. An example would include sitting in a seat positioned near the wings on an airplane.

Of course, CBD may mitigate symptoms that occur due to motion sickness.

How Does CBD Help with Motion Sickness?

Since the discovery of the endocannabinoid system (ECS), researchers know this network of cannabinoid receptor sites plays a significant role in regulating nausea and vomiting. 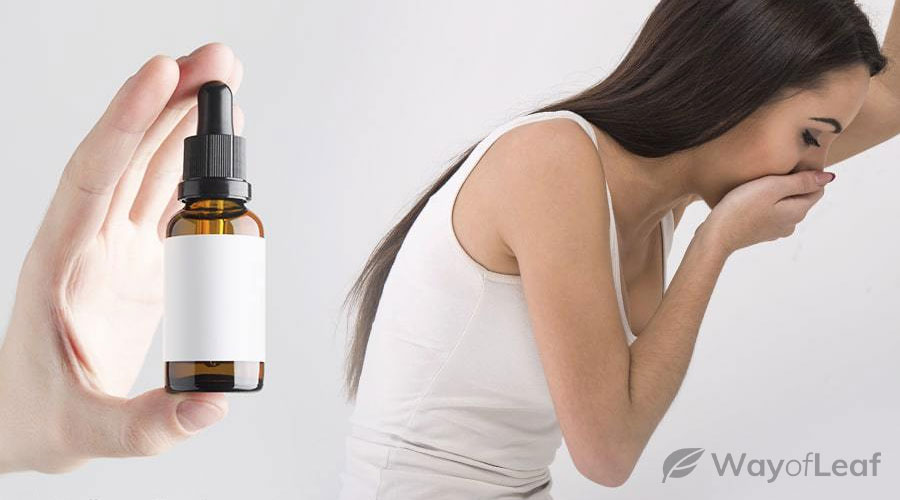 According to several studies, CBD indirectly activates 5-hydroxytryptamine (also known as 5-HT1A), a unique compound that reduces the nausea sensation and the accompanying vomiting reflex.

In 2010, a German research team looked at the blood samples of volunteers before, during, and after parabolic flight maneuvers. Parabolic flight means simulating the weightlessness of space travel. Researchers simulated this phenomenon by inducing a plane into a nosedive for around 30 seconds. It then pulls out sharply for another 30 seconds, before rapidly going downwards again.

Typically, this type of training involves three ‘sets’ of 10 drops. Many trained astronauts find this exercise challenging. Astronauts partaking in this activity experienced vomiting and nausea. The sickest members of the team were those that had the lowest level of cannabinoids in their system. Those who didn’t get sick had a far higher level of cannabinoids.

A 2014 study by Zheng et al., published in the European Journal of Pharmacology, looked at dexamethasone’s effects. It is a steroid that prevents the release of substances that cause inflammation in the body. The study found that a reduction in motion sickness symptoms may occur by enhancing the endocannabinoid system (ECS) in rats.

Given the link between the ECS and the cannabinoids in hemp and marijuana, such as CBD and THC, it could be another sign of CBD’s effectiveness.

Why Choose CBD for Motion Sickness?

One potential reason to consider CBD for motion sickness is that consumers have reported that CBD for nausea is fast-acting and effective. With OTC and prescription medication, individuals say that it can help prevent motion sickness if they take it at least 30 minutes before traveling (although 60 minutes is the recommended time frame). CBD edibles or vaping CBD theoretically offer even faster-acting results.

CBD’s antiemetic properties make it ideal for use in nausea, dizziness, and vomiting, which comes with bouts of motion sickness.

While there is no definitive evidence that CBD is an effective treatment for motion sickness, studies show that it can help to alleviate some of its symptoms, such as nausea and vomiting.

Currently, there are only a handful of studies that look at its impact on motion sickness. To date, the results are promising, but experts need more research. Nonetheless, those faced with motion sickness may still use CBD as an option.

7
3 min read
Join the discussion
TOC
Premium
Your subscription has ended
If you love cannabis and appreciate our content, join WayofLeaf Premium today and receive:
Best of all, part of your membership fee will go towards helping to legalize cannabis.
Go Wayofleaf Premium
No thanks, I can't afford it
I already have an account
×
Login in to your premium account