CBD for Lyme Disease [Does It Play a Role?]

Lyme disease has become more common in the past few years, and it causes a variety of symptoms, some of which can be extremely debilitating.

Now that cannabis-based medicines are becoming more popular, many people are asking whether CBD for Lyme disease could help. In this article, we cover what one may need to know about CBD oil, Lyme disease, and related matters.

What Is Lyme Disease?

When an infected tick bites a human, it transmits the bacteria into their bloodstream.

Doctors usually treat Lyme disease with a course of antibiotics. Although this is sometimes effective, many people continue to experience symptoms, even after treatment. This is known as post-treatment Lyme disease syndrome (PTLDS).

Unfortunately, the incidence of Lyme disease has increased in recent years. The CDC now estimates that around 300,000 new cases occur every year. The plus side is that research into the condition and its treatment is also on the rise. Hopefully, this will lead to the discovery of an effective Lyme disease treatment in the near future.

However, for now, many patients with Lyme disease are left struggling to manage their condition so they can lead a fulfilling life. Read on for more information about the condition’s symptoms and how CBD for Lyme disease could potentially help.

This condition causes a variety of different symptoms. Lyme disease experts usually divide these into early and later signs and symptoms, depending on when they occur.

The first sign of Lyme disease is often a tick bite. However, some people do not realize that they have been bitten, causing a delay in diagnosis.

Often, patients with Lyme disease will develop a rash called erythema migrans. The rash may look like a bullseye, with a central round spot and a ring surrounding it. However, this rash does not always have a bullseye appearance and may not manifest at all.

Other early symptoms of Lyme disease are similar to those of flu and other infections. They include:

The fact that these symptoms are similar to other conditions can lead to further delays in diagnosis and treatment. This increases the chances of going on to develop PTLDS.

Related article
Does CBD Have an Effect on Your Immune System?

Although doctors can cure many patients with Lyme disease, some develop lasting symptoms, even after their treatment is complete. Late Lyme disease symptoms include:

Many people compare these symptoms to those of fibromyalgia or chronic fatigue syndrome. In some people, Lyme disease can affect the heart, causing palpitations. This condition is called Lyme carditis.

As we mentioned earlier, the cause of Lyme disease is a bacterium which humans contract following a tick bite. Several types of ticks can transmit Lyme disease, but the most common is the black-legged deer tick.

The best way to protect oneself against these Lyme disease causes is to avoid tick bites. Take care when in habitats such as long grass and wear insect repellent and long sleeves/pants.

If a tick is found on the skin, remove it as quickly as possible using fine tweezers or a special tick removal device. Do this carefully to ensure that the tick’s mouthparts do not remain in the skin. Clean the area with soap and water or rubbing alcohol, then safely dispose of the tick.

It is essential to treat Lyme disease as quickly as possible to increase the chances of success. The most common treatment for Lyme disease is antibiotics, which patients must take for several weeks. This treatment can be highly effective, providing patients take their medication exactly as directed and complete the entire course.

Unfortunately, some patients’ symptoms continue, even after completing their course of antibiotics. This is where remedies such as CBD may become useful.

Although there is little clinical research on the subject, there are reports of patients using CBD oil for Lyme disease. For those who have never heard of CBD, it is short for cannabidiol. It is one of the many active compounds in cannabis. However, unlike its cousin THC, it does not cause intoxicating effects.

For this reason, CBD has become popular among people with a wide variety of health issues. It provides many of the benefits of cannabis without getting users high. In fact, most companies manufacture their CBD oils using hemp rather than marijuana plants. The difference is that hemp contains less than 0.3% THC. 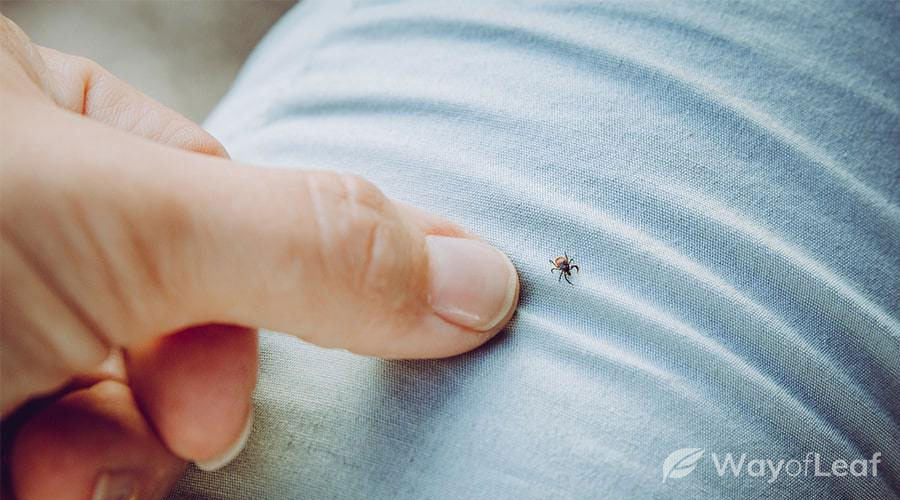 CBD works by interacting with the body’s endocannabinoid system (ECS). This system is composed of a series of cell receptors (CB1 and CB2) and chemicals called endocannabinoids.

When these receptors and chemicals bind together, they trigger a range of reactions that help to maintain homeostasis (balance) within the body. The ECS plays a role in many different functions, including mood, movement, sensation, appetite, immunity, and more.

CBD affects the ECS in several ways, one of which is by slowing the breakdown of certain endocannabinoids like anandamide, which is known as the bliss molecule.

So, how does CBD oil for Lyme work? Let’s take a look.

Cannabis contains many different types of chemicals, including cannabinoids like CBD. The main benefit of CBD for Lyme disease is its ability to influence cells in the immune system. It modulates the immune response, providing an anti-inflammatory effect.

As many know, inflammation is a common cause of pain, including the pain that Lyme disease causes. By reducing this inflammation, CBD has the potential to relieve physical discomfort, aches, and pains.

However, the possible benefits of CBD for Lyme disease don’t end there. There is some evidence that CBD has antibacterial effects. It also works as an antioxidant, helping to protect cells from damage.

Finally, CBD has a potentially positive impact on one’s mood and sleep. The latter is likely to be beneficial for patients living with the consequences of any chronic disease.

Many people use CBD as oil, which they hold under the tongue for 60–90 seconds before swallowing. Doing this allows consumers to feel the effects of CBD throughout their entire body.

However, more and more people are now choosing topical CBD, which they can apply directly to painful areas. This method has the advantage of providing fast relief wherever it is needed most.

So, it appears that CBD could offer patients some hope when it comes to Lyme disease treatment. However, more in-depth research is necessary to confirm precisely to what degree.

It seems that CBD might provide some relief for patients who have Lyme disease. Its anti-inflammatory properties could help to relieve pain while offering several other benefits throughout the body. More scientific evidence is necessary to determine precisely how CBD for Lyme disease works, but anecdotal reports appear promising.

Anyone wishing to use CBD to treat Lyme disease or any other condition should first consult with a medical professional. They will be able to offer guidance on how to use the substance safely and effectively for your situation.

It is also essential to purchase CBD oil from a reputable company. As a bare minimum, we recommend choosing a brand that publishes third-party lab reports on its website. These reports will explain precisely how much CBD is in each product and ensure that they are free from contaminants.

Other things to look out for include CBD that comes from organic hemp and solvent-free extraction processes such as CO2 extraction. We have published many different brand reviews here on WayOfLeaf to help guide in making a decision.

We hope that this article has answered common questions on CBD oil and Lyme disease.

16
6 min read
Join the discussion
TOC
Premium
Your subscription has ended
If you love cannabis and appreciate our content, join WayofLeaf Premium today and receive:
Best of all, part of your membership fee will go towards helping to legalize cannabis.
Go Wayofleaf Premium
No thanks, I can't afford it
I already have an account
×
Login in to your premium account