Medical cannabis and cannabidiol (CBD) have taken the media by storm in recent years, with a growing body of research emerging about the potential benefit of these plant-based therapies.

For example, research suggests that cannabis may help with symptoms relating to chronic pain, nausea, lack of appetite, sleep disorders, seizures, and more. However, can cannabis and CBD treat autism symptoms? There’s been some recent news stories on the topic, but is the use of marijuana for autism feasible in a clinical sense?

Believe it or not, there are a handful of credible academic publications on using marijuana for autism. Additionally, Israeli researchers are conducting an ongoing investigation on the potential effects of CBD on autism spectrum disorder. Let’s take a closer look at some of the details.

Autism spectrum disorder (ASD), more commonly known as autism, is a neurodevelopmental condition typically diagnosed in early childhood. As a spectrum disorder, ASD has a wide range of symptoms; rarely are two people affected by autism in precisely the same way.

Common symptoms of autism include:

It is unclear exactly what causes individuals to develop ASD, but it is likely due to a complex combination of genetic and environmental factors. There is little evidence that upbringing, diet, or vaccines play a role.

There is currently no known cure for ASD. Treatments exist, but they are geared more towards reducing the severity of symptoms and improving the quality of life for autistic people and their families.

As far as medication, certain prescriptions may work to treat some of the symptoms of autism. For example, antipsychotic drugs may improve behavioral issues, and antidepressants can be used for symptoms such as anxiety and depression.

The problem with these medications is achieving a proper balance that limits the potential of adverse side effects. In many patients, conventional medicine is ineffective and/or problematic in terms of contraindication. This is leading researchers and autistic people and their families to seek out the possibility of new, alternative autism treatments.

Much of the current evidence on cannabis and CBD for autism symptoms is anecdotal. For example, it’s quite easy to go online and find articles from patients or patient family members claiming that marijuana is a cure for autism symptoms.

While these reports can be positive and provide hope, they offer little in terms of reliable clinical evidence on the effects of marijuana and CBD on autism.

Nevertheless, increased exposure to the topic has galvanized some researchers into investigating the practical effects of cannabis-based therapy on ASD.

CBD & Autism: What Does the Research Say?

One such researcher is Dr. Adi Aran, Director of Pediatric Neurology at Shaare Zedek Hospital in Jerusalem. Dr. Aran first recognized the potential of cannabis and CBD for treating autism symptoms in light of prior research conducted on the effects of cannabinoids on epilepsy.

Based on data suggesting that cannabis compounds effectively treat ASD-related seizures, Dr. Aran designed his own small-scale study on CBD-based medical cannabis for autistic children. The study, published in the academic journal Neurology, included 60 ASD individuals with an average age of 12 years. The participants had not seen any improvements in their condition using conventional treatment methods.

Dr. Aran’s participants were treated with CBD and tetrahydrocannabinol (THC) at a ratio of 20:1, having their dosage gradually increased to a daily maximum of 10mg of CBD per kilogram of body weight.

There have been some studies on using CBD for autism. The research looks at various symptoms of ASD, including seizures, communication skills, and anxiety.

Behavioral and communication components (including symptoms such as anxiety) were assessed both before and after the cannabis treatment period. Results were overwhelmingly positive, with 61% of patients experiencing a significant improvement in behavioral ASD outbreaks.

Furthermore, besides the benefits of CBD for the ASD individuals themselves, the study results also observed the positive effect of CBD on the children’s parents, who reported 33% less stress by the end of the trial.

The Future of Research on Cannabis and CBD for Autism

Results of this groundbreaking Israeli study were so promising that a similar trial is now in the works, this time with twice as many participants. The study (linked above) is a double-blind, placebo-controlled trial in which participants will take either CBD oil or flavored olive oil for 12 weeks. Subjects will then undergo a four-week detox before starting the second round of CBD and placebo treatments for a further 12 weeks. 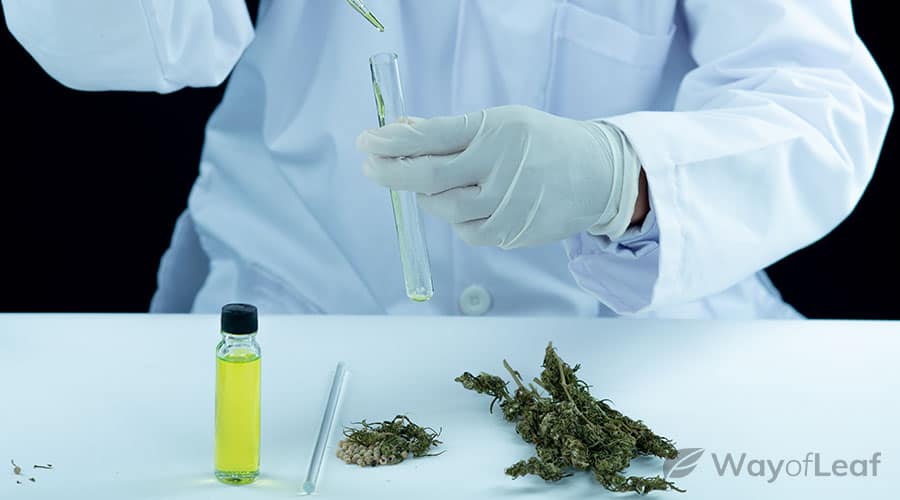 Neither the participants, the parents, nor the researchers will know who is taking the CBD and who is taking the placebo. This double-blind method is considered the gold standard for clinical trials, meaning results should leave little doubt about whether cannabis and CBD can effectively treat autism symptoms.

The ECS and Autism

The endocannabinoid system, or ECS, exists in all mammals. It is made up of receptors and chemicals known as endocannabinoids, which affect the body similarly to the cannabinoids found in cannabis.

The endocannabinoid system plays a vital role in many of our biological functions. This seems to include the development of our brains and nervous systems, both prenatally and throughout childhood and adolescence.

Based on reports that propose an irregular ECS in autistic people, at least one study suggests that “the [potential] of CBD to impact the symptoms and comorbidities affecting individuals with ASD is significant.”

Of course, any long-term effects of cannabis and CBD on autistic children are still unclear.

The Israeli study referenced above found that few of their 60 participants experienced adverse effects from CBD treatment. The most commonly reported side effect was sleep disturbance, which affected just 14% of participants. A further 9% suffered from increased irritability, while 9% experienced a loss of appetite.

Also, it’s worth pointing out that the study chose to use a high CBD-to-THC ratio for its subjects. Given the intoxicating and mind-altering nature of THC, a high-THC cannabis medication for autistic children would not be practical in a clinical sense. CBD, on the other hand, does not cause intoxicating effects.

In a phenomenon known as the entourage effect, however, there are suggestions that small amounts of THC can optimize the pharmacological activity of CBD. Achieving an effective balance between these compounds would be key, especially in prescribing a cannabis or CBD treatment for young children.

Always speak with a doctor before giving any sort of cannabis or CBD treatment to a child. Medical cannabis is an option for children with qualifying conditions in some states, but this is strictly based on patient-by-patient doctor evaluation.

What Are the Risks of Using CBD for an Autistic Child?

There is an ongoing debate about the safety of cannabis use in young people, with several publications citing the potential for cannabinoids to affect brain development. It has been suggested that adolescents who regularly use marijuana are at higher risk of developing psychological problems later in life.

Scientists do not yet fully understand why this is the case, but animal studies suggest that it could be due to the endocannabinoid system’s role in neurological development.

In contrast, there are few concerns about using CBD to help autistic children. The World Health Organization (WHO) said that CBD is generally well tolerated and has a good safety profile. Indeed, the FDA has approved Epidiolex, a drug containing CBD, to treat Dravet syndrome, Lennox-Gastaut syndrome, or tuberous sclerosis complex (TSC) in patients aged 12+ months.

However, there are a few possible adverse effects associated with CBD, including:

Furthermore, it can interact with certain medications. This is yet another reason why it’s important to talk to a doctor before using CBD.

CBD for Autism: Is It Legal to Use it on Children?

The 2018 Farm Bill legalized the cultivation of industrial hemp with a maximum THC content of 0.3%. Yet, it did not legalize CBD itself. Nonetheless, almost every state in America tolerates the sale, purchase, and use of cannabidiol as long as it comes from hemp and has no more than 0.3% THC.

There are two exceptions. One is Idaho, where the THC limit is 0.1%. Things are even more extreme in Kansas, where CBD products must contain no THC whatsoever. Consumers can get around this issue by purchasing CBD isolate or broad-spectrum products from brands such as Medterra and CBDistillery. Both types of products contain 0% THC, although it is wise to check the results of third-party reports.

In certain states, the age limit for purchasing CBD is 18, while other locations won’t sell to anyone below 21. However, there’s little to stop a parent from buying CBD and giving it to the child at home.

Does My Child Require a Prescription When Using CBD for Autism?

The answer is “no” as long as the CBD comes from hemp and has a maximum THC content of 0.3%. The Farm Bill classifies any Cannabis Sativa L. plant with more than this amount of THC as marijuana.

It is also worth remembering that because marijuana is a federally illegal substance, doctors can’t prescribe it. Indeed, they technically can’t prescribe CBD products either, barring Epidiolex. What they can do is provide medical advice on whether they think using CBD for autism symptoms is a worthwhile option.

Related article
Do You Need a Prescription for CBD Oil?

Confused by CBD laws? You're n…

Research on cannabis and CBD for autism is still in its early stages. So far, however, the available evidence shows great promise. Further studies are already in development, and these should help confirm whether cannabis and CBD can be beneficial for autism and its associated symptoms.

That said, it’s important to remember that there is little data on the long-term effects of cannabis and CBD on autistic children. Current research suggests that CBD may help to improve behavior, communication, and anxiety with a low risk of adverse effects, but much more research is needed.

Parents who have a child living with ASD that would like to try cannabis or CBD must talk to their physician first. A doctor should be able to advise on the most appropriate dosage for the child and discuss how to incorporate cannabis-based therapy into a daily routine safely.

16
6 min read
Video
Join the discussion
TOC
Premium
Your subscription has ended
If you love cannabis and want to support our site, join WayofLeaf Premium today and unlock
Best of all, part of your membership fee will go towards supporting the fight to legalize cannabis.
Sign Up for WoL Premium
Not now
I already have an account
×
Log in to Your Premium Account