While CBD and THC both offer psychoactive effects, only the latter causes an intoxicating high. As a consequence, a significant number of people eschew THC in favor of CBD. However, they don’t realize that combining the two could prove more effective than either cannabinoid alone. As long as you get the ratio right, you can mix the two without succumbing to a high.

Let’s examine the science behind why CBD works better with a certain level of THC.

Why Do People Try to Avoid THC?

THC is associated with getting stoned. It is understandable why consumers would try to steer clear. After all, employer drug screenings can uncover THC metabolites. Also, several states allow CBD but not THC. Once you go above the 0.3% THC threshold, you’re breaking the law in these locations. It is also the case where higher THC products come from cannabis rather than hemp. This is also illegal in certain states.

THC is associated with getting stoned. It is understandable why consumers would try to steer clear.

You can purchase full-spectrum CBD and CBD isolate products. The former contains trace amounts of THC, while the latter is almost entirely CBD. There is also broad-spectrum CBD which contains dozens of cannabinoids but zero THC.

Full-spectrum CBD potentially gives you the best of all worlds. It comes from industrial hemp and contains a maximum of 0.3% THC. For the vast majority of users, even the upper end of the limit shouldn’t lead to intoxication. Moreover, you could receive a range of benefits that you may not get from CBD isolate or broad-spectrum products. This is due to a phenomenon known as the entourage effect.

THC and CBD are just two of over 110 cannabinoids the cannabis plant produces. The best available scientific studies clarify that whole-plant cannabis extracts are superior to single compounds. This is due to the complex mix of cannabinoids, flavonoids, and terpenes, which interact synergistically to produce the entourage effect. 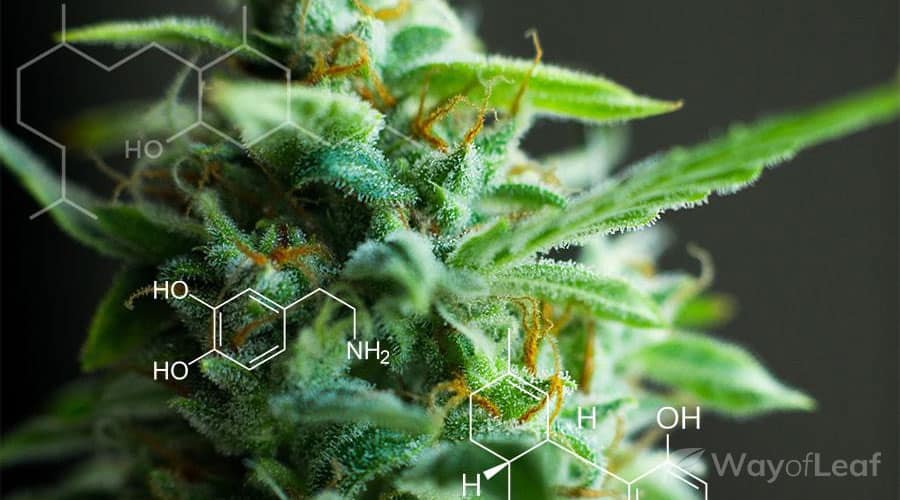 According to this theory, the therapeutic benefits of CBD are possibly amplified by the presence of even a little THC.

Ethan Russo is one of the main champions of the entourage effect. He wrote about it in the British Journal of Pharmacology in 2011 and Frontiers in Plant Science in 2018.

Recent mentions include this study published in Current Neuropharmacology in 2020. The researchers point out that adding terpenes to cannabinoids could help with anxiety and mood disorders.

How do THC & CBD Work Together?

Researchers are still trying to learn more about how CBD, THC, and other cannabinoids, interact with our endocannabinoid system (ECS). We know that THC has a powerful binding affinity with the CB1 receptors in the ECS. Less is known about CBD’s effects. The long-held assumption that CBD has little or no effect on the CB1 receptors is being challenged. It may not bind to CB1 receptors like THC, but it does have an indirect impact, at least.

CBD seems to raise the levels of endocannabinoids, such as anandamide, in the body. The cannabinoid also targets various receptors, such as serotonin and GPR55. It is through these pathways that CBD could help alleviate anxiety, muscle spasms, and other issues.

When you mix CBD and THC, the CBD effectively gets in the way of THC’s attempts to bind with the CB1 receptor. This helps explain why CBD reduces the intoxicating effects of THC.

However, even though they have varying pharmacological properties, they can have similar benefits. What happens is that they act through different mechanisms. For instance, both THC and CBD alone could help relieve pain. However, combine the two, and you could potentially benefit from an even better level of pain relief.

Now, let’s look at research into standalone CBD and when it is mixed with THC.

CBD Is Building an Impressive ‘Résumé’

CBD has shown promise for its powerful antipsychotic properties in human trials of treatment-resistant schizophrenia.

Furthermore, in May 2017, a clinical trial tested the effects of CBD on the debilitating epileptic condition, Dravet’s Syndrome. The study found that CBD reduced seizures by half in 43% of subjects who received the medication. The trial helped prompt the FDA to approve a CBD oral solution known as Epidiolex, predominantly for seizure cases, in June 2018.

For instance, a 2015 study in Neurotherapeutics found that CBD was potentially useful in helping with anxiety disorders. A study published in The Permanente Journal in 2019 discovered that CBD helped fight insomnia and reduced anxiety.

The list of positive results from CBD studies is growing quickly, and the cannabinoid’s track record is promising. However, there is also plenty of evidence that mixing CBD with THC has many benefits.

What Research Says About Combining CBD and THC

According to multiple studies, CBD is more effective when used together with THC. Here’s an overview of a few relevant studies.

Both THC and CBD have value. However, we need a lot more research to find out the right ratio.

The answer is ‘no,’ which means you’ll need to experiment to see how it impacts you. Here is a quick overview of common CBD to THC ratios (CBD is mentioned first) and their likely effects.

Final Thoughts on Why You Need a Little THC

THC and CBD both have potential medical benefits. Humans have used whole plant medicines for millennia, and CBD is part of this tradition. Originally, many people believed that pure CBD was a lot more effective than its full-spectrum counterpart. However, recent research has revealed that the two compounds are often more effective when used together.

Humans have used whole plant medicines for millennia, and CBD is part of this tradition.

Patients looking to give their CBD supplements an extra boost should consider adding a little THC to the mix. Please check your state’s rules on cannabis use before considering THC. If you don’t live in an adult-use state and don’t have an MMJ card, THC from cannabis remains illegal. CBD products with over 0.3% THC are also prohibited.

What Does CBD Stand For?

The Shelf Life of CBD Oil: How Long Does it Last?

How long does it last?

Will CBD-Infused Beer Become the Next Big Thing?

4
5 min read
Join the discussion
TOC
Premium
Your subscription has ended
If you love cannabis and want to support our site, join WayofLeaf Premium today and unlock
Best of all, part of your membership fee will go towards supporting the fight to legalize cannabis.
Sign Up for WoL Premium
Not now
I already have an account
×
Log in to Your Premium Account