Athletes are expected to perform ‘clean’, though cynics suggest that sport is awash with users of performance-enhancing drugs (PED). There is a movement toward the use of CBD in sports. This leads us to some interesting questions. Does CBD help improve performance or boost recovery? If it does, should sports and CBD mix, or should it become classified as a PED?

Is CBD Good for Sports?

There is little doubt that the use of cannabidiol amongst athletes is increasing. The rapid increase in the number of sports CBD products available is a testament to that fact. Unlike THC, cannabidiol doesn’t cause an intoxicating high. Therefore, when you are ‘on’ CBD, you are not stoned.

There are several reasons why athletes use CBD sports drinks and CBD sports cream. Here are a few of the most common:

What Does the Research on CBD and Sports Say?

There is plenty of skepticism regarding the benefits of CBD sports nutrition, and the properties of the cannabinoid in general. Opponents cite a lack of research. However, there are now more than 11,000 published medical and scientific studies overall. There aren’t many studies that specifically look at CBD and sports. However, there is research about many of the claims made by athletes.

Take inflammation, for example. CBD seems to inhibit COX2, an eicosanoid enzyme. For the record, NSAID medications such as aspirin target the enzyme similarly. CBD also appears to impact cytokines, a class of molecules crucial to the inflammatory process. Research suggests that cannabidiol reduces these pro-inflammation molecules, thus reducing inflammation. 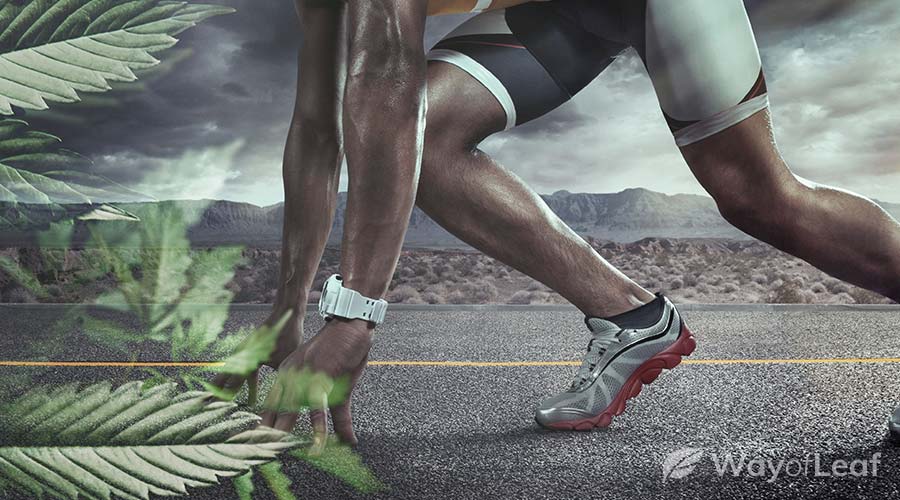 A study by Burstein, published in Bioorganic & Medicinal Chemistry in April 2015, looked at the effects of CBD on inflammation. The researcher found that CBD has anti-inflammatory properties and plays a role in pain management. Anyone who has had an intense workout knows how beneficial such an effect is.

The pain you feel when your muscles are fatigued is caused by microscopic muscle tears, along with inflammation. This tearing is crucial for muscle growth, as it enables the body to increase the size of its muscles, along with boosting strength. Also, when a muscle gets sore, it is often a signal that the body must restrict muscle contraction to prevent damage.

This response is healthy, but can negatively impact performance. CBD could moderate the signals sent through the body, and manage reactions for muscle tightness, contraction, and cramps.

First and foremost, we must point out the staggering number of athletes that use the cannabinoid. There is a growing belief that there are genuine CBD benefits for sports. The sheer prevalence of the cannabinoid forced the World Anti-Doping Agency (WADA) to act. In January 2019, it released an updated list of banned substances. To the relief of many, WADA removed it from the list and encouraged other regulatory bodies to follow suit.

It seems likely that athletes will be allowed to use CBD during the next Olympic Games. However, those who use it must be wary of any product’s THC content. Professional athletes who use it should look for products with zero THC if possible. In 2019, Rob Gronkowski, a former NFL player and Super Bowl winner, made a big announcement. He said he was partnering with a company that produces a line of CBD products.

There are growing calls for major American sports leagues to permit CBD. Sadly, these calls have fallen on deaf ears. At present, cannabidiol remains prohibited in the MLB (Baseball), NHL (Ice Hockey), NBA (Basketball), and NFL (American Football.) However, organizations such as the PGA (Golf) and MLS (Soccer) now allow players to use CBD. It seems likely that eventually, groups such as the NFL and NBA will permit the use of the cannabinoid.

Can NCAA Athletes Use CBD Oil?

There is a ton of controversy surrounding the NCAA and its treatment of athletes. The organization makes an extraordinary amount of money and pays the players nothing. The group was sued, but a federal court ruled in its favor. It said that the NCAA legally doesn’t have to pay since it doesn’t employ the students.

In any case, the NCAA is a big deal in North American sports, as the athletes strive to push forward and land a professional contract in a major sports league. The organization’s penchant for negative publicity was on full display in May 2018. It banned a football player who used CBD oil to control his seizures. At the time, the NCAA reiterated its ‘zero-tolerance drug policy.’

These days, the NCAA position on CBD is less clear. The substance isn’t on its latest list of banned drugs. However, it does mention cannabis, THC, and synthetic cannabinoids. This decision clearly came on the back of the 2018 Farm Bill. If you decide to use CBD while playing in the NCAA, make sure it is free from THC. Otherwise, you could fail a drug test and receive a ban.

Summary on CBD in Sports

There is no doubt that CBD and sports are becoming a more popular combination. Those who believe in the cannabinoid, say its properties include alleviating pain and reducing inflammation. If this is true, athletes can expect to recover faster, which is a tremendous advantage when competing at a high level.

The WADA ruling is a significant boon, especially for athletes intending to compete in events such as the Olympics and World Championship. What’s puzzling is the stance of American sporting leagues such as the NFL, MLB, and NBA.

There is quite a long history of players in these leagues resorting to highly addictive opioids to manage their pain. These drugs are legal but cause untold damage. Incredibly, sports CBD products are not allowed in a league like the NFL, but the participants can pop as many harmful pills as they like.

Hopefully, common sense will prevail, and players will finally have the option to use CBD.

Understanding the difference between CBD and Full Spectrum CBD

How Long Does CBD Stay in Your System? [Answered]

What Veterinarians Are Saying About CBD for Pets

Should You Dab CBD for Ultimate Potency? [ANSWERED]

CBD Bioavailability: The Complete Guide to This Complex Term