Using CBD as an Appetite Suppressant – Does It Work?

Several outlets recently have touted CBD as an appetite suppressant, citing its potential to be used as a weight-loss supplement. But is there any academic or scientific backing to these claims, or are they just empty marketing ploys used by CBD companies?

A 2012 study published in Psychopharmacology reported on the way that CBD affected the feeding patterns in rats, and found that exposure to the compound did indeed result in reduced appetite. These findings set the stage for more research to be done on the potential weight loss opportunities with CBD. It also brought to light a new possible use for CBD as an appetite suppressant.

However, there is still much to learn about the ways in which CBD may affect the appetite. If you’ve been considering using CBD to help control your appetite, read on to find out everything we know so far.

How Does Our Appetite Work, in General?

Hunger is one of our basic survival instincts and is thus primarily controlled by the brain. It lets us know when we need to eat, and even what we need to eat. When people have an intense craving for certain foods, it shows that the body may have a deficiency in a specific essential nutrient that is contained in that food.

Although hunger and appetite work side by side, they are not the same thing. Appetite refers to wanting to eat, rather than needing to eat. Appetite controls when we eat, what we like to eat, and how much we eat. That said, appetite is similar to hunger in that it is controlled by the brain.

Related article
Why Does Weed Make You Hungry? [Answered]

The release of certain chemicals react with neurotransmitters in the brain to tell us when we’re hungry and what we want to eat. These chemicals may directly stimulate the appetite or encourage the production of other chemicals in the body, like ghrelin.

However, there are other factors that can also affect the appetite. Mood, feelings, and emotions can all influence whether or not we want to eat, as well as the types of food we crave.

How the Endocannabinoid System Controls Appetite

Cannabinoids such as CBD interact with the endocannabinoid system (ECS), which is considered to be one of the most important physiological systems in the human body. It regulates various important functions, including sleep, mood, and appetite. 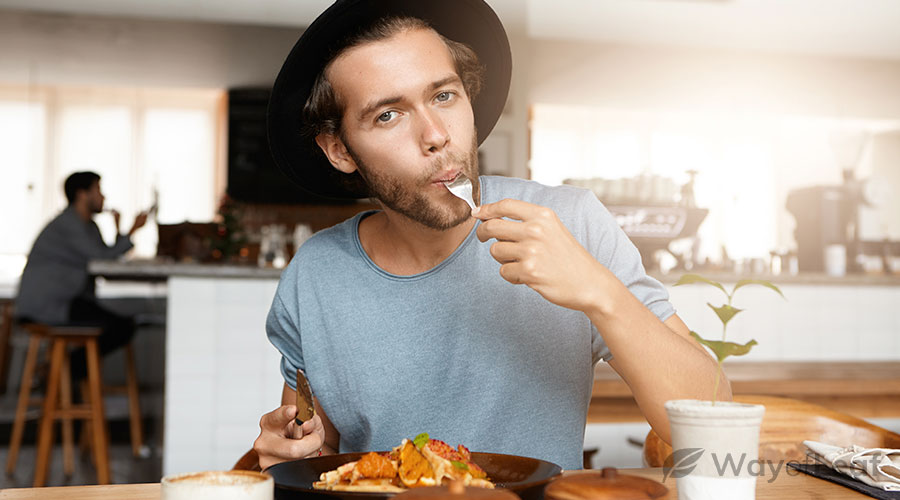 ECS activity that occurs in the central nervous system regulates food intake. This is because when people are hungry, the ECS sends signals to the hypothalamus – a part of the brain that helps to regulate appetite. This, in turn, lets the limbic system (an area that controls emotion) know it’s time to eat.

Endocannabinoids are responsible for slowing down the process of gastrointestinal emptying and transit and seem to stimulate the secretion of ghrelin (a hormone that increases appetite and food intake). After eating, the brain is sent satiety signals (through the hormone leptin), which reduces activity in the ECS and lets the body know that it’s full.

CBD as an Appetite Suppressant

When CBD interacts with CB1 receptors (which are primarily located in the brain), it may have a regulatory effect. Therefore, it could either act as an agonist or antagonist. An agonist binds to neuroreceptors in the brain to stimulate or promote the production of certain hormones and chemicals in the body. An antagonist has the opposite effect, preventing or slowing the production of hormones and chemicals.

According to a 2007 study, CBD acts as an antagonist of the CB1 receptors. In some instances where excessive eating is of concern, CBD may be helpful in reducing the production of ghrelin, and therefore the feeling of hunger. It may also increase the production of chemicals that are released to tell the body that it’s full. This process may significantly reduce appetite.

Related article
CBD Oil for Weight Loss: Is It a Scam?

Another study published in 2018 reports that CB1 receptor antagonists may help to reduce appetite, as well as control obesity by blocking off or deactivating the receptor. Although CBD doesn’t deactivate the CB1 receptors directly, it may influence other molecules to block them off. Shutting off these receptors may suppress the appetite, and prevent overeating in some people.

At this stage, it’s important to make it clear that although there is plenty of laboratory evidence to suggest that CBD can be used as an appetite suppressant, there haven’t been any direct clinical studies to show that CBD may reduce appetite in humans.

Final Thoughts on CBD Being Used as an Appetite Suppressant

The initial results of studies done on using CBD as an appetite suppressant are promising, and may encourage more research involving how cannabidiol works to regulate natural hunger cycles. However, it’s important to not overstate these claims because, as mentioned above, current clinical research does not show a direct link between CBD and a reduction in appetite in humans.

That said, research suggests there’s little harm in trying CBD. For some individuals, the compound very well may prove to be an effective appetite suppressant. Of course, keep in mind that exercising and a healthy diet will always be the most important aspects to achieving a healthy lifestyle.

Related Articles
Copaiba vs. CBD: Which Is Best for What?

All you need to know and more

0
8 min read
What Is CBD Chocolate? [We Answer All Your Questions]

0
6 min read
What Does CBD Stand for?

Understand the good from the bad

55
6 min read
Video
Approved
Synthetic Cannabinoids: Why They Really Should Be Avoided

5
3 min read
CBD Oil Ingredients: What You Need to Know

Find out what's inside...