Written by Sam Eskenazi, B.A., PGCA
7 min read
0 comments
Read Later
All information on this website is for general informational purposes only and is not intended or implied to be a substitute for professional medical advice, diagnosis or treatment.
Stormtrooper Cannabis Strain Overview
An incredibly potent strain, Stormtrooper needs a fair amount of prep before you can enjoy it. Get yourself a comfy pillow and clear your schedule; this strain will have you unconscious before long. 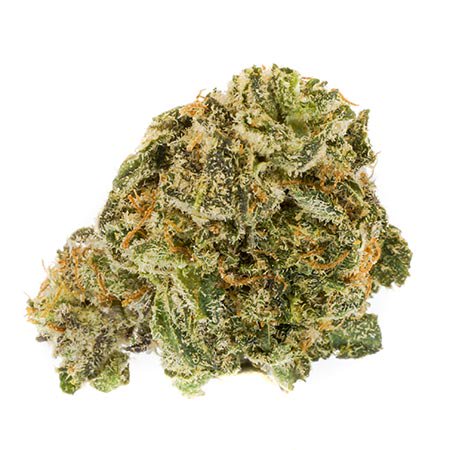 Any long-term fans of the Star Wars franchise should be intimately familiar with stormtroopers. The white armored, blaster-wielding tools of the Empire are as fundamental to the Star Wars movies as lightsabers.

The stormtroopers’ most infamous quality is their ridiculous aim; no matter how many shots they fire, they are always unable to hit the heroes. Well, how surprised would you be if the reason for their inaccuracy was just a little too much THC?

Though we can’t know for sure what strains stormtroopers might be smoking in a galaxy far, far away, we can get pretty close with a few strains here on earth.

To emulate the feeling of uselessness, along with a touch of general spaciness, growers from Lakewood’s Infinite Wellness Center have come up with the Stormtrooper strain — a cultivar with some of the highest THC levels on the planet.

Let’s take a look at this spacey, ethereal strain and discover if it really will stop you shooting straight.

What is the Stormtrooper Strain?

The Stormtrooper strain comes from Infinite Wellness Center, a Lakewood based marijuana facility all about making strains with as much THC as possible.

The name choice of this strain is due to its intense THC concentration and the general spaciness it induces, as well as its ancestry. Stormtrooper comes from a strain known as Jedi 41, another incredibly popular potent strain, and Crystal Storm. 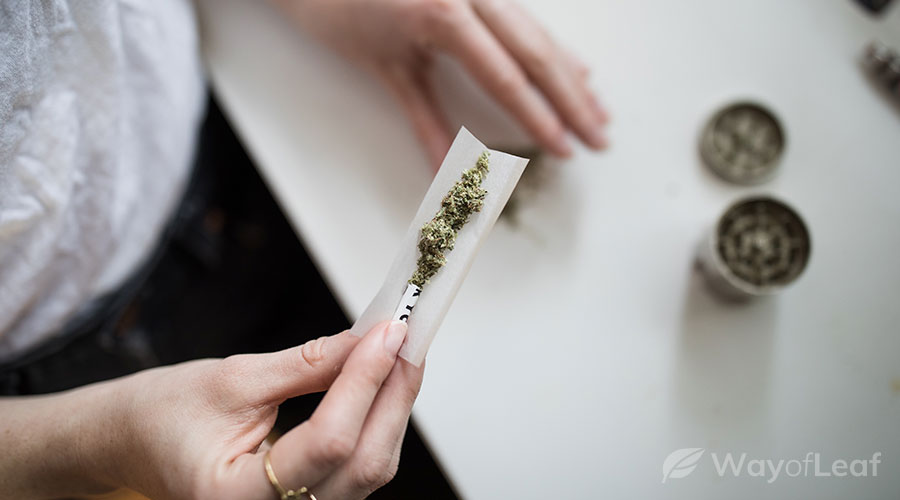 In a way, Stormtrooper is sort of the ultimate Star Wars strain as it combines an intense, spacey lethargy with a proud lineage of other Star Wars-related strains.

The main reason most people enjoy smoking Stormtrooper is its incredibly powerful effects, some of which can be felt for hours at a time.

The very moment you first taste the smoke of this mesmerizing strain, your spirits will lift and leave you feeling almost intangibly pleased with yourself. This rush of good feelings and self-satisfaction will carry on as the high develops, eventually transforming into a dreamy, almost spacey high.

This rush of good feelings carries on as the high develops, eventually transforming into an otherworldly high.

Everything around you will feel vaguely distant and ethereal, leaving you not quite sure if you are standing, flying, or floating. However, you will most certainly be locked to the nearest comfortable surface as the couch lock kicks in incredibly hard.

After a good few hours of this cerebral, pleasant high, you will all of a sudden fall into a deep, dream-filled slumber. You will be pretty much unwakeable, no matter what anyone tries to do, so make sure that you have a clear schedule. Better yet, take it at nighttime.

The high is principally located in the head, giving a profound head rush. Still, the body high is noticeable as well, betraying the very slight concentration of sativa in its hybrid genetics.

Expect to wake up refreshed, eager, and exceedingly optimistic about the day ahead.

When you get a strain with so much THC and such intense effects, you generally expect a specific flavor profile. There is an ingrained expectation that strains with a lot of THC smell like kush and diesel.

While Stormtrooper does somewhat conform to this by offering a strong, typical kush aroma, it has plenty of other flavors mixed in to keep things interesting.

The initial aroma is certainly kush-like, but there is an almost unctuous richness as you smell it, almost like the smell of melting butter. This is backed up by plenty of those familiar diesel flavors, demonstrating its incredibly intense genetics.

As you break your Storm Trooper buds open and light them up, you will undoubtedly find that same kush quality in its flavor. Trying to describe the taste of buttery kush is difficult using the limited English language. Still, the best way to think of it is a creamy, substantially satisfying herbaceousness. It won’t taste like any particular herbs, but that’s what it will remind you of.

The diesel is also a lot more noticeable when you smoke it. There is a little bit of sourness, which manages to contrast the more robust flavors of this bud and make it a more well rounded tasting experience.

Buds of the Stormtrooper strain are quite compact, and are actually shaped a bit like a stormtrooper’s helmet. They are ordinarily green, but the green is a lot darker and more intense than most other buds. This gives it a gorgeous forest-y look.

While many white trichomes are coating the surface, it isn’t enough to make it look like the armor of a stormtrooper. However, to soften this disappointment, the under layer of extremely fluffy orange trichomes lets you know that you are in for an incredible experience once you start to smoke it.

Unfortunately for hopeful home growers, Stormtrooper strain seeds are not especially common, even online. While you might get lucky and find some seeds at your local dispensary, your best bet is to try and find someone already growing it themselves.

In this way, you can get a clipping from the plant and grow a clone. This clone will be an identical copy of the source plant, so make sure you ask your growing friend precisely what tricks they used to help it flourish.

Thanks to the relatively few plants being cultivated by home growers, there isn’t a lot of information about this strain. However, once you get it in the ground, it’s likely to survive both indoors and outdoors equally well.

The Stormtrooper cannabis strain is likely to survive both indoors and outdoors equally well.

As this strain is principally an indica-leaning hybrid, it will tend to grow very indica-like in its appearance. So, expect your Stormtrooper to grow short and bushy, with especially dense foliage.

To encourage a healthier growing pattern, make sure you are regularly trimming the plant’s underbrush. This will ensure your Storm Trooper plant doesn’t focus too much of its growing energy on unnecessary, non-bud producing foliage. You can also promote more lateral growth by clipping off the plant’s tip in a process known as “topping.”

This will make the plant grow more sideways-leaning branches, which are more likely to result in greater bud production thanks to extra access to sunlight.

After harvesting your Storm Trooper, expect an insane quantity of THC in your bud – so much so that you likely won’t believe it at first.

The highest test of the THC levels found in Storm Trooper is around 45%, which almost makes it a nugget of pure THC. While many individual samples will probably test at less THC, the fact that you can get such incredibly high THC levels in a strain is almost unheard of.

Unfortunately, while Storm Trooper boasts an exceptional THC quantity, there isn’t any CBD to be found. This isn’t a problem, though, because the sheer quantity of THC is more than enough for a variety of medical benefits.

Medical Benefits of the Stormtrooper Strain

Thanks to its incredible potency, Stormtrooper could treat all manner of different conditions.

For starters, anyone suffering from insomnia or an inability to sleep properly will massively benefit from this strain. While it won’t knock you out completely after taking it, a few hours after you first smoke, this strain will see you face down on your pillow, incapable of being woken up.

This also ties into its incredible mental effects, because it is a wonderful way to suppress mental anguish or stress. After smoking Stormtrooper, it will be pretty much impossible to consider any stress or anxiety you are suffering from. 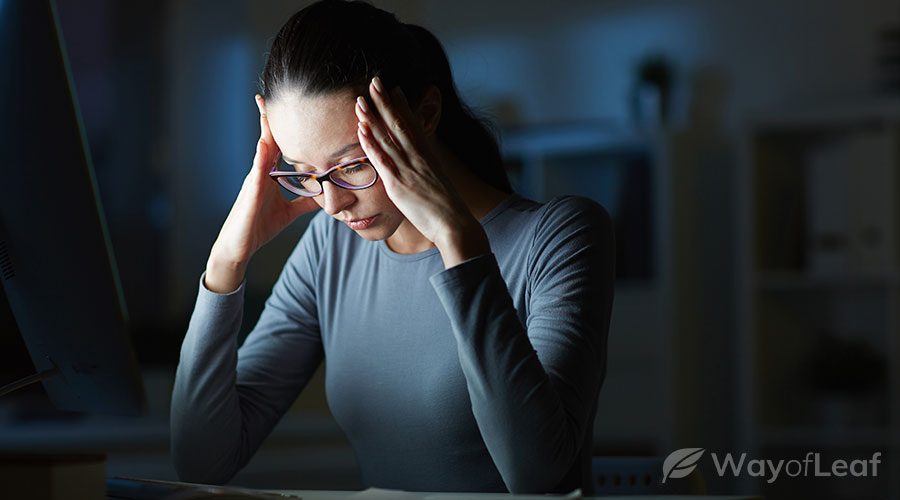 This is also why a lot of people use Stormtrooper to treat their depression, as it makes it very difficult to dwell on negative thoughts or feelings.

Those struggling with chronic pain are in luck as well, as they might find some relief from their continuous pain. Ultimately, Stormtrooper is all about providing as much of an effect as possible; due largely to its otherworldly THC content.

Of course, with such intense potency comes a few side effects as well.

Possible Side Effects of the Stormtrooper Strain

When you get a strain with such a long list of useful medical benefits, it is only fair to expect that it comes with a few side effects. In the case of Storm Trooper, most of its problems stem from users being unprepared when smoking it.

You can certainly expect both dry eyes and dry mouth to plague you after smoking, but they aren’t too bad. This is because of the munchies that it creates, which naturally lead to you drinking plenty of water, helping to fight off any dryness that might be affecting you.

The main side effects of Stormtrooper are mental and are linked to overuse. Thanks to its high levels of THC, it is very easy to smoke too much at once. This can lead to feelings of paranoia, as well as a heightened sense of anxiety.

The big problem, though, is the psychedelic effects it starts to create after smoking too much. Anyone familiar with common psychedelic drugs would understand, but it can be pretty disorientating if you aren’t used to it. The walls will shift and undulate, and you might find yourself struggling to articulate or even fully wrap your head around what’s happening in the immediate environment.

However, as long as you are exceptionally careful with your dosage, you should be okay.

Final Thoughts on the Stormtrooper Strain

The Stormtrooper strain is not only an excellent way to pretend you are an imperial stormtrooper fighting in the Empire; it’s also an excellent example of a high-potency strain. With its heavily indica effects and the speed with which it takes hold, this strain will either knock you out or elevate you with never before seen levels of THC intensity.

Take care with this strain, as it is super easy to smoke too much. But, if you are careful and know your limits, you are in for an incredible, spacey experience in a galaxy far, far away.