Written by Editorial Team
4 min read
1 comments
Purple Urkle Strain Overview
Purple Urkle is a well-balanced strain with delicious earthy and grapey notes. In fact, some compare the flavor to that of grape soda. So it’s ultra easy on the taste buds. Besides being delicious, it also is known for its relaxing and euphoric high. 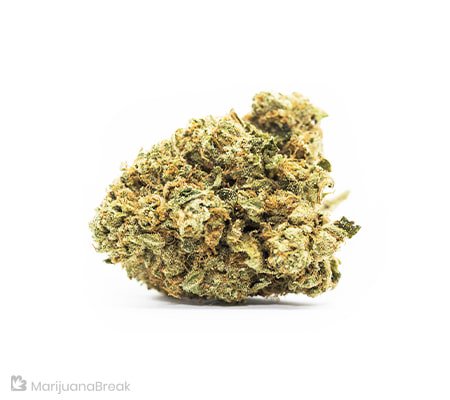 The Purple Urkle strain’s name probably won’t make much sense unless you are a fan of hit sitcom Family Matters, which aired from 1989 to 1998. In case you’re unaware, and many of our non-American readers probably will be, Steve Quincy Urkel was the show’s most popular character.

He was originally supposed to be in one episode but made such an impression that he became central to the show. Urkel was extremely accident prone and became involved in numerous hilarious mishaps. Although Purple Urkle is named after such a character, there is nothing hapless about it.

What is the Purple Urkle Strain?

Purple Urkle weed is a balanced hybrid, and its parentage is traceable to Mendocino Purps, which itself came from the legendary Emerald Triangle region in northern California. The strain probably became known on the West Coast at some time during the 1980s and was a popular option in the Golden State once medicinal marijuana became legal in the mid-1990s.

According to Michael Backes, who wrote Cannabis Pharmacy, Purple Urkle was first bred at the Cannabis Buyers’ Club of West Hollywood back when weed was still illegal. Its purple genetics, a result of its lineage which includes Grape Ape and Granddaddy Purple, soon made it a favorite amongst cannabis lovers.

It only takes a brief scent of Purple Urkle to make you eager to try it out. The grape notes and earthy-grape sweetness are exceedingly alluring.

Many users suggest that this strain tastes akin to grape soda. Certainly, there is a strong grape taste, although you may also get a hint of berries. It is also a very skunky strain laden with grassy flavors. It is a thick and sugary smoke with an earthy flavor on the back end.

As you can guess from the name, this strain has velvet calyxes with hints of forest green providing a gorgeous contrast with the glistening trichomes and orange pistils. The buds are usually dense and cone-shaped or round.

Although it is a visually appealing marijuana strain, Purple Urkle seeds should only be purchased by experienced growers; it is certainly not the first strain you should ever try to cultivate. You need to pay a lot of attention to the nutrients consumed by these plants, and it is worth noting that Purple Urkle is one of the few strains that generally yields more when grown indoors.

If you are a grower who has a set nutrient line and is unwilling to change, you will find Purple Urkle to be a challenging mistress. It isn’t easy to grow this strain outdoors. While it will be ready for harvest by the middle of October, it needs a warm and sunny environment to thrive, and only offers around 9 ounces per plant.

When you grow it indoors, it should flower in 8-9 weeks and provide up to 18 ounces of bud per square meter planted. Aside from feeding Purple Urkle a lot of nutrients, you need to grow it at cooler temperatures than other indicas. If it doesn’t grow in the right conditions, it can produce an unpleasant aroma.

Purple Urkle is a relatively strong marijuana strain with a THC content ranging from 18% to 21%.

There is minimal CBD in this strain. Don’t be surprised to find that it has less than 0.1% CBD. As a result, the THC to CBD ratio could be over 200:1.

What Can I Expect When I Use Purple Urkle Weed?

As it is a fairly balanced hybrid, Purple Urkle is capable of providing users with a wide range of effects. Although you get the best of both, the indica aspect of the strain normally wins out. Once you take a few tokes of this weed, you should begin to feel far more relaxed than normal.

There is a chance that you will feel parched after the first few hits so get a glass of water. Soon, you should feel like relaxing even though your eyes and mind will remain somewhat alert. Eventually, your eyelids will relax, and there is a strong chance that you will drift off to sleep if you are already tired.

Users report a feeling of euphoria, and in most cases, the only thing you’ll want to do is sit down on the sofa, relax, and watch dull TV, or listen to good music. The cerebral high is invigorating yet doesn’t provide you with an energy burst. We recommend using it in the evening when it is time to relax and unwind.

Purple Urkle is very popular among medical cannabis patients. It has the potential to provide relief to individuals across a wide spectrum of ailments. For example, insomniacs sometimes find that this strain is an effective sleep aid which means you shouldn’t try to use it during the day unless you need a nap.

Purple Urkle helps calm body and mind which means it is often prescribed to patients with an anxiety disorder, depression, or stress. This is because of its propensity to help eliminate negative thoughts from your mind. The strain’s sedative effects also ensure that it is used to manage the pain of conditions such as fibromyalgia. Consider using it if you have joint problems, headaches, or muscle spasms.

Although it is unlikely, one possible reason why this strain is called Purple Urkle is because of what happens to clumsy people who use too much of it. It provides you with a potent body high so if you try to perform any strenuous activities while high on this weed, you could have a Steve Urkel type accident.

As it is a potent strain, using too much of it could cause side effects such as dizziness and headaches. Common adverse effects include dehydration, cottonmouth and dry eyes.

Purple Urkle weed is potent and appears to be making a comeback in California. Although it has been relatively popular for a couple of decades, sales of this strain are beginning to rise again. It seems that medicinal and recreational users alike enjoy the relaxing sensation and grape soda taste.

It is a gorgeous strain to lay your eyes upon but it is not that easy to grow. We don’t recommend trying to cultivate Purple Urkle unless you have several successful grows under your belt. If you are in real need of rest, feel chronic pain, or else you are fed up with dark thoughts taking over your mind, consider using this marijuana strain.