Written by Editorial Team
5 min read
0 comments
Read Later
All information on this website is for general informational purposes only and is not intended or implied to be a substitute for professional medical advice, diagnosis or treatment.
Nuggetry OG Strain Overview
With all the great qualities and effects of a typical indica and a hearty dose of intense, almost psychedelic time dilation, the Nuggetry OG strain is a thing of beauty that everyone needs to try at least once. 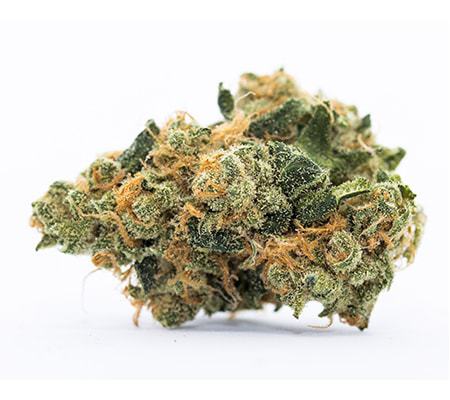 What Is the Nuggetry OG Strain?

Nuggetry OG is named after its breeder and became an almost instant success when it entered the market due to its robust, full-bodied high. While Nuggetry OG is a hybrid with an apparent 70/30 split in favor of indica, it offers minimal sativa effects. Indeed, some users mistakenly believe it is almost pure indica! However, we still don’t know its parentage.

The Nuggetry OG strain of weed is everything that you would expect from an indica. It provides strong cerebral effects along with an impactful, full-bodied high. Nuggetry OG is not a good strain for those who are new to cannabis or who do not smoke regularly. The effects of Nuggetry OG can feel overpowering and are often too extreme for novice smokers.

You first notice the effects of Nuggetry OG taking hold as your thoughts start to feel cloudy. It becomes a challenge to connect ideas and reach definite conclusions. Your perception of the things around you start to become altered, almost as though everything is moving at half speed.

As the physical effects of Nuggetry OG start to set in, you feel as though your energy levels are drained. You may find it challenging to complete even basic tasks. As the effects of Nuggetry OG work through your body, your limbs feel increasingly heavy. Eventually, it becomes difficult to move, and you notice a tingling sensation across your body.

It is best to enjoy Nuggetry OG at home when you know that you have no commitments for the rest of the day. It is perhaps a good idea to do so in the company of at least one good friend. This strain has long-lasting effects and is suitable for late afternoon or evening use.

When you first smell the Nuggetry OG marijuana strain, it can feel a little overpowering. With time, however, its aroma grows on you and starts to become quite pleasant. Breaking Nuggetry OG buds apart intensifies the aroma, filling the entire room with a harsh chemical smell that has subtle, earthy notes. The bud’s aroma sticks to surfaces almost instantly, making it difficult to hide even hours later.

As Nuggetry OG buds burn, you can detect a subtle note of fresh citrus hidden behind the cloud of dense, earthy smoke. The lemony freshness is a welcome change of pace for many, brightening the air and making the experience slightly more enjoyable.

Unfortunately, the smell of citrus does not last long. As Nuggetry OG continues to burn, the sour gas aroma dominates the air around you, pushing all other smells into the background.

For those who are not used to smoking Nuggetry OG, its dense smoke might not be the best place to start. It can be cough-inducing. Even the most experienced smokers often find themselves having to fight off uncontrollable coughing fits at first.

Nuggetry OG’s flavor profile is just as strong and hard to deal with as its aroma. This strain takes a little getting used to; it’s rare to enjoy your first puff. As you get used to the sour mix of flavors, though, Nuggetry OG becomes much more comfortable to smoke. It even becomes enjoyable over time.

When you first inhale Nuggetry OG’s thick smoke, you notice an earthy taste mixed with a bitterness that is not to everyone’s liking. The wet earthiness is robust, but there are more subtle notes beneath. Those who enjoy harsh diesel flavors will love this strain. The taste can linger on the palate for up to an hour after use.

Nuggetry OG buds have an emerald green coloring to them, with the addition of delicate orange pistils that weave throughout, forming into clumps upon the surface. 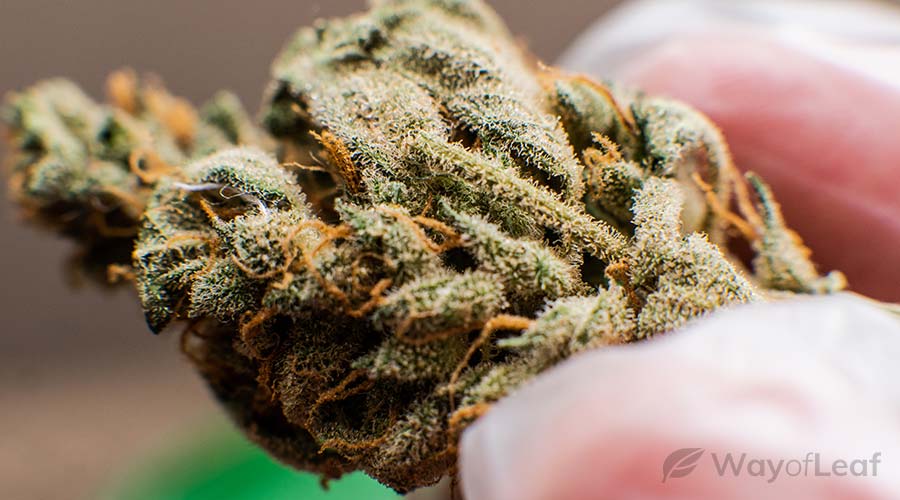 Nuggetry OG leaves are thicker than the average leaves on an indica plant, making them stand out. They have a similar emerald green coloring as the buds, giving the plant a uniform appearance.

While Nuggetry OG plants are resistant to most common molds and garden pests, they are temperamental and require consistent care.

A warm, humid climate is optimal for keeping Nuggetry OG plants, meaning you can keep them inside or outdoors. Indoor growers need to trim their crop regularly as these plants grow tall.

Outdoor plants are typically ready for harvesting around early fall and produce a larger than average yield. Indoor plants can take ten weeks to flower, and they provide a slightly smaller yield than outdoor plants.

You can purchase Nuggetry OG strain seeds online, though finding a reputable seller is challenging. Some people prefer to buy clippings from mature plants, as it is much easier to detect a low-quality product straight away. Cuttings have the additional advantage of being easier to grow, and they save you the time it takes for seeds to germinate.

Related article
How to Clone Weed Plants [Do It the RIGHT Way!]

The Nuggetry OG cannabis strain has an average THC content of 16-20%, although some tests have shown higher levels. While it isn’t at the very top-end in terms of THC level, this strain’s effects are usually too intense for novices.

In general, you will seldom find a version of Nuggetry OG with a CBD content above 0.8%.

The intense effects of Nuggetry OG mean that the majority of its medicinal benefits are focused around physical conditions. One of the main reasons why MMJ users choose this strain is for pain management.

Within a few minutes of smoking it, a calming numbness spreads through the body.

Some users claim it can reduce even the most intense pain. Even a small amount could have benefits. You might also find it useful if you suffer from migraines.

The strong sedative effects of Nuggetry OG mean it is a possible choice for individuals who have sleeping problems. However, be wary of using large doses as the effects are potentially overwhelming.

Possible Side Effects of the Nuggetry OG Strain

Nuggetry OG has a higher than average THC content, and it shows in terms of the strain’s potential side effects. Sudden dizzy spells and anxiety occasionally occur among those who smoke Nuggetry OG and are not used to a high THC content. Use a small amount and monitor how it makes you feel to avoid this issue.

Another common side effect of smoking Nuggetry OG is dry mouth. This issue can cause the inside of your mouth to feel intensely dry and irritated. This is even the case once the effects of Nuggetry OG wear off.

Nuggetry OG is an intense strain best enjoyed by those who smoke regularly and enjoy a potent indica. It offers a long, soothing high, while also managing to take you on a mental journey with a difference. It is best to enjoy Nuggetry OG when you have the rest of the day ahead of you and a comfortable couch to relax on.