Written by Patrick Lynch, M.A.
3 min read
0 comments
Read Later
All information on this website is for general informational purposes only and is not intended or implied to be a substitute for professional medical advice, diagnosis or treatment.
Dick Cheese Overview
The Dick Cheese strain is a strongly indica-dominant hybrid liable to cause sedation. Famed for its scent, which resembles stinky cheese, this strain has a mild cheese flavor with hints of sweetness. It is very much a strain for evening/nighttime consumption as it leads to couch lock. 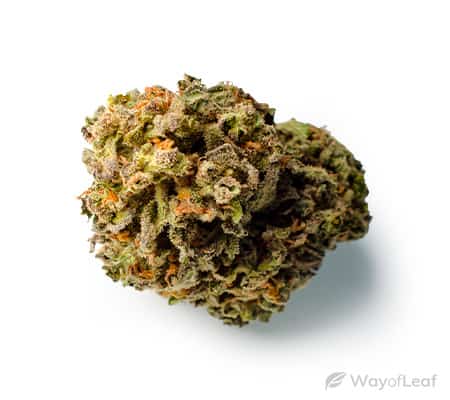 There’s little question that marijuana breeders have a lot of fun when it comes to naming their strains. From Alaskan Thunderf*** to Crouching Tiger Hidden Alien and Cat Piss, the list of memorable weed strain names is stellar. You can add Dick Cheese to that list, a strain known for its intense aroma and propensity to cause the munchies. Read on to learn more about this fast-acting, hard-hitting, amusingly named strain.

What Is the Dick Cheese Strain?

The Dick Cheese strain is a strongly indica-dominant hybrid strain. Also known as Cheesy Dick, this strain is the creation of Big Buddha Seeds and is exceptionally popular in the United Kingdom. 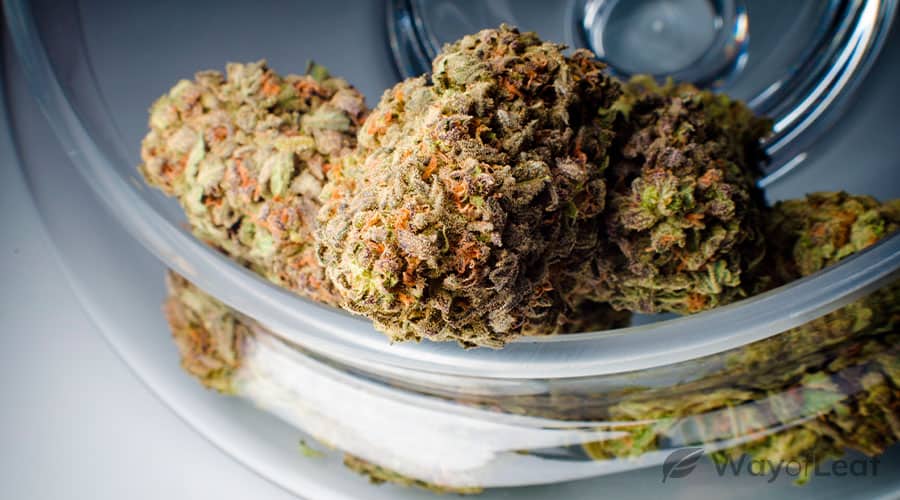 If you’re planning to try this strain, be warned! It is exceptionally hard-hitting, with users likely to feel potent effects within minutes. You will probably experience strong cerebral effects and feel completely intoxicated before realizing it.

Users also report that the Dick Cheese strain leads to feelings of pure happiness and bliss, which can last for hours. Towards the end of the high, there’s a good chance you’ll feel ravenously hungry because this strain causes a serious case of the munchies. By then, you’ll be amid couch-lock, so it is best to ensure your snacks are within easy reach. Ultimately, you’ll feel a level of sedation that will make you want to sleep.

The strain’s name is a giveaway as to what you can expect it to smell and taste like!

Once you open a bag of Dick Cheese buds, you’ll understand the need for good ventilation when you start smoking them! There is a powerful scent of dank rotting cheese. Once you light up, you’ll also notice a surprising sweetness in the air. If you’re looking for a mild-smelling strain that allows for a clandestine smoke, this strain isn’t it.

The strain’s taste is a little milder than the aroma, which may come as a relief to some users! The creamy cheese flavor is somewhat pleasant, perhaps because of the fruity hints. Upon the exhale, you may also get a spicy taste.

Dick Cheese’s buds are large and pepper-shaped with many orange pistils. It isn’t a strain with a massive amount of THC, evidenced in the relatively small coating of glistening trichomes.

Dick Cheese’s growing difficulty is best classified as “medium.” You could have a successful harvest as a novice grower, but you’ll get the best out of this strain if you have previous harvests under your belt. 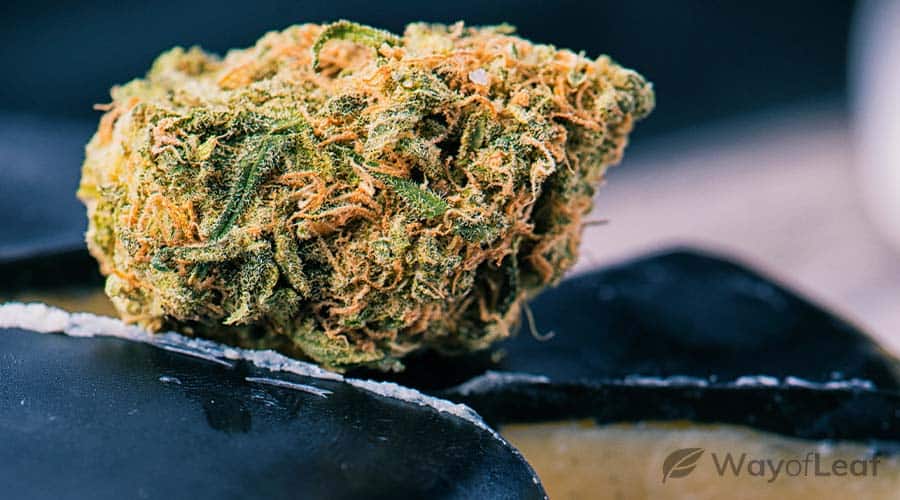 It is a strain you can cultivate indoors or outdoors. If you choose to grow it outside, please note that Dick Cheese requires a warm climate to provide the best yield, which could exceed 14 ounces per plant. Outdoor-grown Dick Cheese is generally ready for harvest by the end of September.

Indoors, Dick Cheese has a flowering time of about 8-10 weeks with a yield of about 11 ounces per square meter planted.

By the standards of a modern hybrid, Dick Cheese is very much in the “medium” category for THC with approximately 16%.

Dick Cheese is a strain with minimal CBD. Testing indicates that its CBD content is approximately 0.4%.

Dick Cheese is a cross of Big Buddha Cheese and Moby Dick. It is up to 95% indica which is why it has a sedative effect.

Perhaps the most obvious benefit of Dick Cheese is its capacity to help users get to sleep. The extreme sedative effects of this strain mean that even individuals with extreme insomnia struggle to stay awake after taking a few puffs. The effect of this strain is such that one should only use it when planning to relax for the evening.

This relaxation means Dick Cheese could also prove useful for individuals with anxiety or stress. While it isn’t the most potent strain on the market, it could help reduce inflammation and alleviate pain. Finally, this strain is worth a try if you need something to boost your appetite.

Possible Side Effects of Dick Cheese

As Dick Cheese isn’t as high in THC as many modern hybrids, it is less likely to exacerbate existing feelings of anxiety or paranoia. Nonetheless, it is wise to use it cautiously because excessive consumption might lead to dizziness and headaches. More common adverse effects include dry eyes and dry mouth.

Although Dick Cheese has an amusing name, its effects are no joke! It may not have the highest THC content on the market, but it causes heavy sedation and is best used when winding down for the evening. MMJ patients may want to try it if they need help combatting insomnia, pain, or loss of appetite.

Dick Cheese has an aroma that might prove too pungent for some users, but the flavor is milder, mercifully! It is a moderately easy strain to grow, although you’ll get the best results if you have some marijuana growing experience.

1
3 min read
Video
Join The Discussion
TOC
Premium
Your subscription has ended
If you love cannabis and want to support our site, join WayofLeaf Premium today and unlock
Best of all, part of your membership fee will go towards supporting the fight to legalize cannabis.
Sign Up for WoL Premium
Not now
I already have an account
×
Log in to Your Premium Account