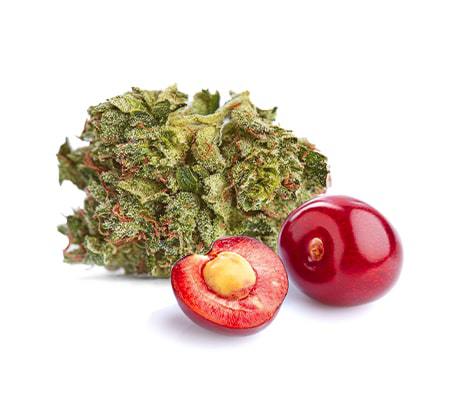 If you’re looking for the perfect nighttime cannabis strain, then Cherry Kola may be just what you need. It’s classified as an indica strain and originated out of Sonoma County, California, over the last five years.

Up until 2016, Cherry Kola was very hard to find – it hadn’t ventured far outside of California. However, in 2014 it was entered into several categories at the 2014 High Times Cannabis Cup in its hometown of Sonoma County and got rave reviews.

Since then, Cherry Kola has boomed, winning five awards over various competitions all around the world. It’s quickly becoming a fan favorite and giving Sonoma County residents something to boast about other than wine.

The strain is characterized as being slightly drier than most. But the sweet, cherry flavor is what many emphasize as being the strongest attribute of Cherry Kola. Accompanied by a similar fruity scent, this strain produces soothing clouds of smoke that occupy the room for quite some time after puffing.

Keep on reading our complete Cherry Kola review to find out more about this booming strain.

What Is Cherry Kola Strain?

The Cherry Kola cannabis strain is a 70/30 indica-dominant hybrid. It’s a unique strain with a heartwarming backstory. In this case, the origin is not about the lineage but rather the people of Sonoma County and a non-profit organization that was established to serve the needs of patients.

The idea of being a member of the Sonoma County Collective is to have access to low-cost medication. It’s possible to make prices affordable by sourcing from the membership. Furthermore, there is a patient-to-patient delivery service in place that is both convenient and discreet.

The collective is managed and run by the members, and since its founding, several cannabis strains have been produced – one of them being Cherry Kola.

Cherry Kola is a cross between two Afghani strains. One is from the region of Takhar, and the other is from the province of Kandahar. Both are purebred landrace strains of excellent traits and qualities. Its cherry-like scent is one of the most notable qualities inherited – hence the name.

The THC level of this strain is incredibly high, with an average of 22%, which is great for advanced smokers who are looking for something a bit more unique. It’s a potent strain that induces a euphoric buzz that isn’t only uplifting but also very relaxing. Those who use it tend to experience an overwhelming feeling of happiness.

The high experienced from smoking Cherry Kola is described as body-centered, with strong feelings of relaxation and euphoria. After only a couple of hits, all your pent-up tension will be released, and you will feel yourself sinking deeper into your chair. This feeling lasts for hours, with tons of tingles and bliss. The haziness of the high is long-lasting and only subsides when you’re ready to fall asleep.

The Cherry Kola aroma is described as raspberry framboise and honeydew, with a hint of freshly cut grass. Esters of lemon rind and crushed pine needles tend to fill the room that it dries in. Furthermore, both the aroma and flavor are closely related with a sweet cherry smell and a palate rich in spices and syrupy goodness.

The initial drag of Cherry Kola brings an explosion of lemon verbena and cherry flavors. On the exhale, you can expect a very smooth texture with hints of raspberry tea, sarsaparilla, and a kola nut.

The intense flavors leave the palate with an enjoyable finish of lavender and freshly sliced lemon.

The buds are dense and light green in color with orange hairs and patches of purple hues, accented by a sheet of crystal white, resinous trichomes.

For now, the Sonoma County Collective doesn’t seem to be making Cherry Kola seeds available to the public to buy.

That said, it is an indica plant, and like others is thought to thrive in both indoor and outdoor environments. Typically, indica strains have a flowering time of 7 to 9 weeks, and Cherry Kola is believed to be the same. During harvest, each square meter will produce approximately 10 to 12 ounces of buds.

Although there’s not much information available, when grown outdoors, the best flowering time is estimated to be between September and October. Each plant is also likely to produce at least 12 ounces of bud or more.

Cherry Kola has an average THC level of about 20%. However, this figure can vary greatly. Different tests have found the strain to have THC levels as low as 16% and as high as 25%.

The CBD level of Cherry Kola has the same story as most other highly bred indicas in the United States. You won’t find a strain with more than 1% of CBD in this bud.

Although originally it did have higher levels of CBD, it was all bred away to make more space for THC in the final bud. Even though there isn’t much CBD in the Cherry Kola strain, it still has a variety of medicinal benefits.

Cherry Kola may be effective in relieving a variety of medical conditions. Recreationally, it’s used for relaxing at the end of a long day. But it may also be helpful for those who are going through stressful times.

Because the strain delivers a euphoric buzz, it works as a powerful stress-reliever. It also induces happiness, which is why it may help people with depression to focus on the positive side of things.

Cherry Kola is also used for relieving pain. Chronic illnesses and other painful conditions can make life a lot worse than it already is. But this strain can alleviate these aches and pains and provide some much-needed comfort. The pain-relieving effects are great for muscle spasms, headaches, nausea, muscle tension, and cramps.

This is a highly sedative strain, which means that it may also be effective at treating insomnia, bipolar, and mild cases of PTSD.

Many people who use Cherry Kola are also likely to feel hungry. Provided that you don’t smoke too much, you shouldn’t have a problem getting up and grabbing something to eat. For this reason, Cherry Kola may also be useful to people who need to stimulate their appetite.

Although many cannabis strains offer incredible medicinal benefits, not to mention the desirable recreational high, there are also some potential adverse effects.

Bloodshot red eyes and having a dry throat are some of the most common side effects. Depending on the type of strain, these and other adverse reactions can be more pronounced.

One significant contributing factor is the amount of weed consumed. Individual physiology and conditioning are other factors. But still, some strains tend to cause more unwanted effects than others.

Due to its high THC level, Cherry Kola could cause some users to feel paranoid.

Cherry Kola isn’t widely available outside of Sonoma County, so if you’re in the area, be sure to find some and give it a try. It’s a nighttime bubbly strain that is sure to have you feeling all the great tingles in no time.

If you suffer from insomnia, anxiety, chronic pain, or anxiety, Cherry Kola may be especially effective and provide relief. It improves mood, relieves stress and depression, and prompts giggles. Cherry Kola is quickly becoming a favorite among people all across the country.