Written by Editorial Team
5 min read
0 comments
Read Later
All information on this website is for general informational purposes only and is not intended or implied to be a substitute for professional medical advice, diagnosis or treatment.
Cherry Grapefruit Strain Overview
The Cherry Grapefruit strain is an exciting excursion into the sweet side. Its fruity notes are perfectly balanced with a zing of citrusy sour. This strain features a cool body high with an enervating edge. 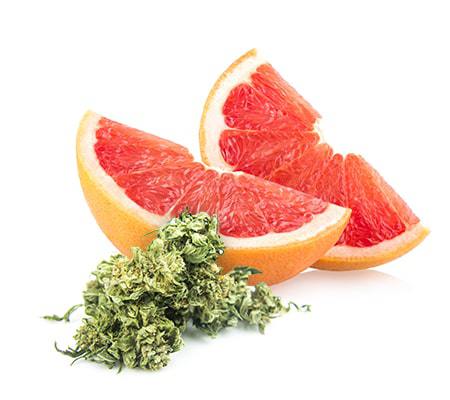 Cherry Grapefruit is an exotic mix of several different strains. These strains include the likes of Chemdawg, Sour Diesel,  OG Kush, and White Widow. Each marijuana profile contains inherent traits they have bequeathed to Cherry Grapefruit.

Cherry Grapefruit’s ancestors supply a fantastic blend of characteristics. This includes potential benefits many users attest to, such as mood elevation, stress reduction, and appetite induction. Migraine sufferers also cite this strain’s effects, and many say they enjoy the relaxing and pleasantly buzzy high.

It has some delicious notes, with more than just a hint of ripe cherries, apples, and other fruits. The addition of citrusy flavors keeps this strain from going overboard, and instead, cements its position as a top strain with a delectable appeal.

Many users take this strain in the morning for a relaxing pick-me-up or in the afternoon to avoid the dreaded “3 pm slump.” It is ideal to use if consumers desire a cool let-down without the intense couch-lock. A bonus is that many users can go about their regular duties and tasks.

What Is the Cherry Grapefruit Strain?

Cherry Grapefruit weed is a hybrid with both indica/sativa origins. It has a varied background and descends from an elite group of strains. As an amalgamation of White Widow, OG Kush, Sour Diesel, and Chemdawg, it has some potent properties and an illustrious array of aromas and flavors.

Chemdawg, for instance, has a powerful fragrance that many would categorize as both brash and intoxicating. Known also for its intense, fast-acting highs, and its creative effects, it has given Cherry Grapefruit its calming, energy-inducing edge. 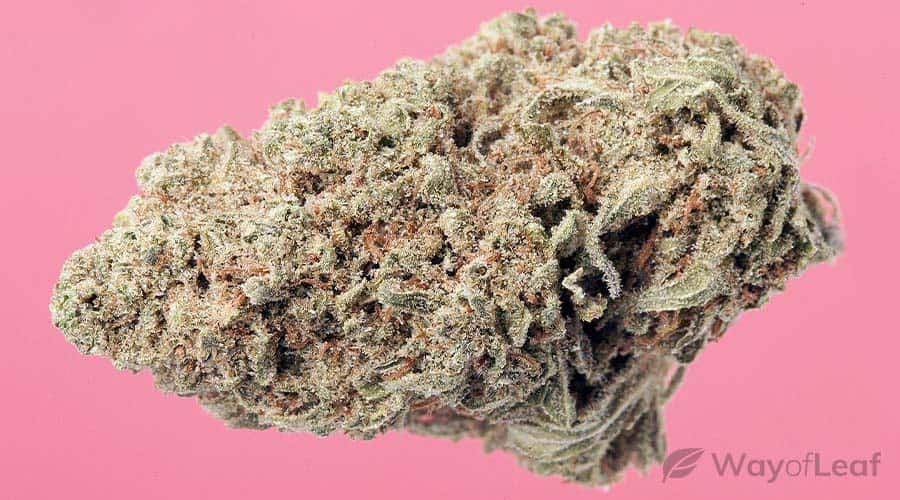 Along for the ride is Sour Diesel, which gives Cherry Grapefruit its notes of intriguing, citrusy sour. Sour Diesel is a cult favorite amongst tokers. It has a penchant for an energetic high tinged with an uplifting and euphoric let-down.

OG Kush follows with a crisp, piney effervescence and in-your-face high. OG Kush features frosty trichomes, a trait it has given over to Cherry Grapefruit. Cherry Grapefruit also sports a generous sprinkle of sticky resin.

Last, but certainly not least in its disposition, is White Widow. White Widow is a strain that was bred by the famed producers, Kera Seeds. While some purport this strain to contain lots of body-boosting effects, others state they enjoy its smooth, sedative and calming profile.

White Widow shares its relaxing and de-stressing tendencies with its offspring. Cherry Grapefruit users state that it’s a great way to wind down after a busy (or even not-so-busy) day.

Cherry Grapefruit has some excellent abilities it can claim as its own. Users indicate it has an incredible propensity to quell aches and pains, and is a study in cerebral euphoria. With a name like Cherry Grapefruit, this strain gives users a peek into its sweet, fruity, and full-bodied nature.

Cherry Grapefruit has an average THC level of 20% or more. While it is THC heavy, it doesn’t boast the kind of high associated with many other potent strains.

Its high is considered euphoria-inducing, with a cerebral feel. Couch-lock and drowsiness has its place. However, those looking for a bit of verve during the day can rely on Cherry Grapefruit’s chill-inducing yet creative vibes.

Newbies should be cautious with this one. While it often doesn’t cause extreme fatigue or drowsiness, its high level of THC may not be for everyone. Those going in for the first time should toke low and slow and carefully observe any reactions.

The Cherry Grapefruit strain has a distinctive yet pleasing aroma. While it doesn’t have the pungent tones of Chemdawg or Sour Diesel, it has some tangy hits. An undertone of diesel and skunk runs beneath each puff. However, this isn’t overwhelming. Instead, users can get a whiff of ripened summer fruit, including bits of citrus and herb.

Flavor is where Cherry Grapefruit shines. It has a profile that isn’t thin and reedy. Instead, it has a rush of rich and robust tastes. Its complicated flavor topography includes ripe, sweet cherries, sugary bits of apples, grapes, and a hint of citrus grapefruit.

The sour taste, though not prominent, perfectly balances the sweet on the exhale. Other notes include herb, a warm bit of earth, and a slight tinge of dank. Some users state they can taste just a touch of spiciness.

The first thing users may notice is that Cherry Grapefruit comes covered in frosty crystals, a testament to its sweet taste and aroma. These trichomes cover all the buds, yet beneath this carpet of sugary goodness are displays of bright orange pistils.

The pistils run the length of the nuggets, and users can see dispersions of eye-catching green leaves. The buds are densely packed and numerous.

Cherry Grapefruit strain seeds are hardy and easy to grow. Therefore, Cherry Grapefruit seeds are a good pick for newer growers, as they are easy to grow and harvest. Its structure when growing leans more toward indica, with a firm, dense construction. It grows relatively tall, so growers should account for this when plotting space.

This strain responds well to a variety of growth techniques, including topping and SOG. Cultivators should also trim often to encourage good air and light circulation. However, this strain does require a bit of nurturing. Growers should provide extra nutrients to the soil bed. 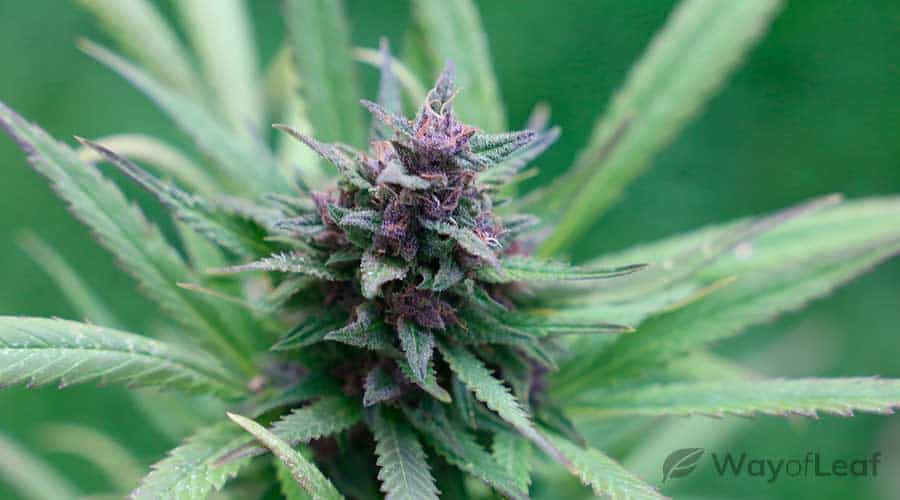 Harvesting with this seed usually occurs in about nine weeks. This is a relatively quick turnaround and great for those that want to see fast results. However, to get optimal results, growers should keep temperatures steady. This plant thrives in warm climates.

An ideal temperature range for this strain is about 84 to 89 degrees Fahrenheit. If growing indoors, the humidity should be at 65% or less. Growers can expect a moderate yield with about 16 ounces per plant outdoors and up to 14 ounces indoors.

The highest content test for CBD is less than 1%.

Users recommend Cherry Grapefruit for its purported effects on stress levels. Many indicate that they experience calming effects and heightened feelings of happiness and euphoria. Other possible benefits may include pain reduction.

Some suggest that this strain is perfect for managing symptoms that stem from migraines and other body aches and pains. Those with back pain and muscle spasms may experience some relief.

Some users state they use Cherry Grapefruit to invigorate creativity and heighten focus. Some users have cited its ability to uplift levels of energy. It may serve to increase appetite as well.

Possible Side Effects of the Cherry Grapefruit Strain

While Cherry Grapefruit strain has many excellent uses, it may cause adverse effects in some users. These effects include dry mouth and dry eyes. Other reported reactions include a tingly feeling throughout the body.

Cherry Grapefruit strain is famous for several reasons. Not only is it incredibly flavorful, but it has many of the properties associated with its famed parents. It is the creation of a four-way cross between OG Kush, White Widow, Sour Diesel, and Chemdawg. These strains, while legendary on their own, give Cherry Grapefruit its enthusiastic high and its relaxing, cool let-down.

Cherry Grapefruit has an aroma that’s not as comparable as its predecessors. Its fruity smell isn’t too sweet or especially cloying. Instead, it has undercuts of citrus, diesel, and some dankness. The flavor is a mix of ripe summer cherries, apples, grapes, and other fruits like grapefruit. It is all topped off with a tinge of piquancy.

Growing Cherry Grapefruit is simple for many growers. For this reason, newbies and old-schoolers alike may enjoy this strain’s cultivation. It is hardy, but grows tall and needs space to stretch and grow. It has some specific requirements that include a warm climate. The optimal temperature is between 84 and 89 degrees Fahrenheit. Topping and SOG would work well with Cherry Grapefruit weed.

Aside from these considerations, Cherry Grapefruit has a moderate yield, with indoor growth at up to 14 ounces and outdoor growth up to 16 ounces or more.

This strain is unnaturally good!

How high will it take you? There's only one way to find out...

4
4 min read
Video
Join The Discussion
TOC
Premium
Your subscription has ended
If you love cannabis and want to support our site, join WayofLeaf Premium today and unlock
Best of all, part of your membership fee will go towards supporting the fight to legalize cannabis.
Sign Up for WoL Premium
Not now
I already have an account
×
Log in to Your Premium Account