Indoor marijuana growers are well aware that plants need to be exposed to light. Remember, photosynthesis is the process by which plants convert light energy into chemical energy. The chlorophyll molecule absorbs light energy and converts carbon dioxide and water into glucose for food.

In the seedling and vegetative stages, indoor growers need to expose plants to at least 18 hours of light daily. For the flowering stage, plants should receive 12 hours of continuous darkness and 12 hours of continuous light each day. Naturally, lighting isn’t much of an issue if you grow outdoors in a suitable climate.

What some cannabis growers don’t realize is that light intensity is key to bigger yields. Assuming your plants have no major illnesses or infestations, the single most significant factor affecting yield is light intensity. Many growers ignore light intensity during the flowering stage, even though this is precisely what drives the production of buds.

The single most significant factor affecting yield is light intensity.

These days, marijuana lighting is big business. You can purchase LED, CFL, MH, HPS, and many other types of grow lights. Even though light intensity is an important topic, it has not engendered a great deal of research. At least not until recent times. Let’s look at some data from the relevant studies and see how marijuana growers can benefit from their fascinating findings. 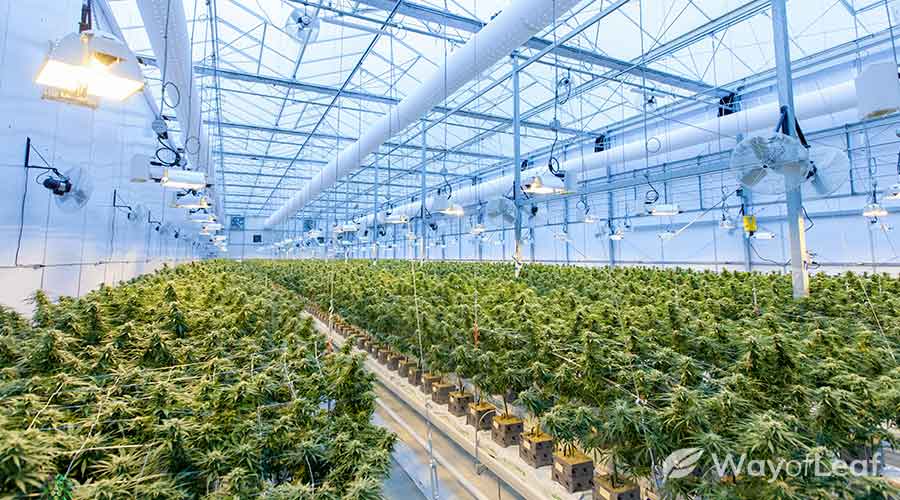 Fluence claims that its systems provide increased yields, better quality cannabis, and reduced energy bills for its consumers. Together, the two firms developed a protocol and experimented with the effect of five light intensities on the Hazy OG strain.

Firstly, before we proceed, it’s necessary to explain some terms to help you better understand the study’s findings.

PPFD | This stands for Photosynthetic Photon Flux Density and is measured in micromoles per second (μmol/s). It quantifies the number of photons falling on a plant. Along with Photosynthetically Active Radiation (PAR), PPFD is used to determine light’s usable wavelengths and spectrums. Most LED lighting systems use PPFD and PAR to market their potential.

DLI | This term stands for Daily Light Integral and is the number of photons received during any 24-hour period in a single location. As you know, marijuana plants need photons for photosynthesis. For it to occur, the plants must be exposed to between 400 and 700 nanometers of light.

More accurately, DLI relates to the amount of light that reaches a square meter of space (10.8 square feet.) DLI is measured using this formula: moles of light (MOL) per square meter (m) each day (d).

What Did the Study Show?

As expected, the study showed that the weight of trimmed flower and shoots increased linearly with light intensity. The largest rise in production occurred between 400 and 600 μmol/m2/s. Trimmed flower weight increased by an incredible 51%, while fresh shoot weight grew by 26%.

Simply put, the study showed that the weight of both flowers and shoots increased with light intensity.

The increases grew far more slowly between 800 and 1200 μmol/m2/s. Trimmed flower weight increased by just 9%, and fresh shoot weight rose by only 5%.

This data seems to suggest that 12000 μmol/m2/s could be the light saturation point of cannabis. In other words, it may not be worth your while wasting money on more powerful lighting.

What was interesting was the lack of cannabinoid increase with light intensity. However, the two companies found that LED lighting provided a 12% higher rate of cannabinoids than HPS lighting.

Overall, the lighting fixture that provided 800 PPFD offered the best value for money. It resulted in a 13.5% increase in yield on the 700 PPFD producing HPS system. Significantly, it also used 44% less energy.

Another study, by the Laval University in Canada, and published in January 2019, seems to back up the earlier data. The information it provided could change the way people grow cannabis indoors forever.

Standard practice involves giving plants between 300 and 750 μmol/m2/s using HPS or specialized LED lights. However, the Laval team found that you could produce greater yields with an easier and more cost-effective setup.

Many assume that marijuana yield will increase linearly right up to 1500 μmol/m2/s. Although, the 2018 study seems to suggest that 1200 μmol/m2/s is the possible saturation point.

Nonetheless, it is possible to hit 1500 by using broad-spectrum lighting that costs far less than you might think. Overall, this type of lighting provides double the intensity of a typical 1060-Watt HPS light.

The study involved members of the Greenseal Cannabis Company. They grew hundreds of marijuana plants and ensured conditions such as soil composition and temperature remained constant. The pertinent change was the exposure to types of light and the intensity of the light. Overall, the yield per plant increased by 0.41 grams on average for every μmol/m2/s that reached it.

Of course, the big question is whether the increase in energy costs justifies the increase in yield. The answer here is an emphatic ‘yes,’ although the researchers used a few assumptions. For instance, they said electricity costs $0.11 per kilowatt-hour (KWH). They estimated that 0.41 grams has a retail value of approximately $2.32 (that figure changes depending on the strain). Therefore, your energy bill only increases by $0.04 for every $2.32 of cannabis produced.

The Laval team pointed out that the study was focused solely on yield sizes. As a result, specialized lighting could improve a strain’s cannabinoid profile and justify a price hike. However, the study showed no evidence that changing the light spectrum bumps up your yield.

Although the data only comes from a couple of studies, it essentially supports what most growers have suspected all along – that light intensity plays an enormous role in bud size and yield.

The studies’ findings suggest that growers should keep the light intensity in the 1200 to 1500 μmol/m2/s range for best results. However, what the studies don’t show is how light affects every single aspect of cultivating marijuana.

Regardless, OutCo saw enough from the 2018 study to significantly change its entire facility and switch to LED lighting only. The company also announced that it would be adding double-stacked benches. This change could provide a 150% increase in square footage.

Based on that study results, a major marijuana grower like OutCo has revolutionized the way it grows cannabis. Perhaps it’s time for home cultivators to follow suit and benefit from higher yields?

The 7 Worst Insects That Can Kill Your Cannabis Crops

Watch out for these deadly pests

How to successfully grow this citrusy strain at home

How to grow this heavenly strain

All you need to know to grow indoors and out

Increase your yield with PROVEN strategies!

The basics to growing some killer organic weed