5 Signs That Your Weed is Potentially Contaminated

We wish that every single marijuana plant was utterly natural and unaltered. Unfortunately, there is contaminated weed on the market. One of the most significant issues facing the cannabis market is the lack of testing. Although cannabis is safe, some is contaminated with harmful substances. At present, a small fraction of weed products for sale are tested for safety.

Cannabis experts in California were concerned as full legalization approached. They believed that up to half of the weed grown in the state contained bacteria, chemicals, or other contaminants. The landscape changed in 2018. A change to state law ensured that marijuana was tested for dozens of harmful chemicals, pesticides, and dangerous fungi.

During 2018, laboratories in the state were pushed to breaking point. New testing thresholds came into effect in July 2018 and January 2019. At that point, issues included long waits for test results and an increase in product testing failures. Fortunately, lab executives report that their businesses are stable. There are now 27 licensed labs, enough to handle California’s workload.

Yet things are far from rosy. According to Tony Daniel of Steep Hill, a pot safety testing lab, the majority of the existing weed supply would fail in a regulated market. Your safest play is to stick with licensed, regulated dispensaries. However, it pays to know the signs of bad cannabis when you see them.

In this article, we look at five signs of potential contamination in weed. But first, we’re going to take a look at a case study. A fungus in California weed has been discovered that is capable of causing significant medical problems.

In January 2018, the British Medical Journal published a case study about a heavy weed user. She began to suffer severe side effects. The patient smoked up to six joints a day and began suffering from tiredness, dizziness, and memory loss. The latter symptom became so bad that she forgot her name on some occasions. Eventually, physicians determined that the cause was a coccidioidomycosis infection, which came from weed in California.

In certain regions in the state, a fungus species called Coccidioides immitis can cause Coccidioidomycosis. It is also known as Cocci or Valley Fever.

When marijuana plants grow in soil where the fungus lives, its spores potentially end up on the plants.

Researchers took samples from the woman’s dispensary in Bakersfield. They found that an incredible 90% of tested plants contained pesticides, while crops from 20 farms contained mold.

Additionally, in February 2017, a cancer patient in California died from a rare fungal infection. It was eventually traced back to the weed they used. Although farmers use pesticides and fungicides on crops that we eat, they are not safe in pot. Myclobutanil, for example, is one of the worst chemicals. It forms cyanide gas, which can enter the bloodstream.

Are you concerned about mold and fungus in your weed? We provide five signs that you’re possibly dealing with contaminated marijuana. Before that, let’s take a closer look at weed contamination.

Legalization is more prevalent around the world, as is the level of cannabis growth. Perhaps you believed that the level of contamination would reduce with the advent of regulation? Alas, most growers don’t have access to adequate testing. Weed contamination can happen during the cultivation, harvesting, drying & curing, or extraction processes.

Cannabis is often exposed to contaminants when held in long-term storage. You can only discover specific issues via chemical analysis, although knowledge helps. Here are a few causes of contaminated cannabis: 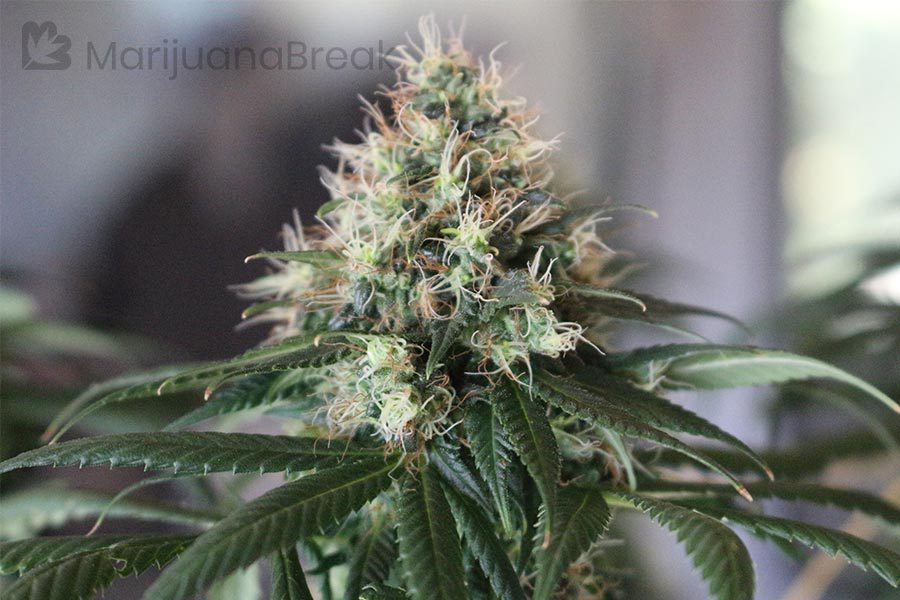 The first sign of contaminated pot is visible on the marijuana plant. Can you see speckled white powdery substances or ‘fuzz’ that is green or grayish? If so, there’s a good chance that you’re dealing with contaminated weed. Therefore, if you grow marijuana, make sure you check it for mildew and mold regularly.

If you catch the mold problem nice and early, you can save your crop. Leave it too late, however, and you will have to destroy everything. Unfortunately, mold spores are capable of quickly spreading to other plants. This is because the mold spores travel through the air. Also, in certain conditions, the spores can potentially grow into fungus. If dried bud begins showing signs of mold infestation, dump the sample. Then investigate your crop to see the extent of the damage.

Grab some of the weed and place it between your fingers; how does it feel? If it is dry and crispy, there is no danger of mold. If it is damp and spongy, you may have a mold problem. Incidentally, beware of weed that has a powdery texture because this is a sign that something ‘extra’ has been added. Unscrupulous dealers sometimes add crushed pills to the bud and make it look like kief.

Although every marijuana strain has a unique scent, it should offer a natural and musky sweet aroma. If it smells damp, excessively sweet, or ‘gone off,’ there’s a good chance that you’re dealing with moldy weed. We also recommend being wary of dried buds that carry a smell akin to freshly cut grass. This is a sign it hasn’t been dried and cured correctly. Marijuana flowers that fall into this category are more likely to develop mold while in storage.

You may feel some unusual sensations in your lungs from time to time after heavy smoke sessions. However, weed should not make you suffer from chest pain. If you smoke cannabis and are soon struck down with uncomfortable chest pain, get in touch with a doctor ASAP. The weed you’ve smoked likely contained mold, fertilizers, or pesticides. If left untreated, the condition could prove fatal.

There is possibly a problem if you suddenly get eye inflammation, an itchy throat, or excessive mucus production. This is especially the case if you have never had an adverse reaction to marijuana before. Once again, it is probably moldy marijuana, and you have suffered an allergic reaction to the contaminants. It is imperative to get in touch with a doctor as soon as this happens.

Hopefully, states become more vigilant about testing weed and begin to follow the standards set forth by California. The Golden State took significant steps in the right direction. As recently as November 2019, Colorado experienced problems. The state issued an advisory warning where it listed strains of potentially contaminated cannabis. These products made it to dispensary shelves in October and November.

It seems remarkable that there aren’t effective testing procedures in place in legal states.

These locations make a fortune from tax revenue. Therefore, they have to ensure safe products for consumers. The growing number of marijuana product recalls in the U.S. tells us two things. One, testing is improving. Two, there is a lot of dubious-grade weed on sale!

No matter where you live, always purchase your weed from a licensed dispensary. Also, don’t be afraid to ask for proof of testing. If you smoke weed contaminated with mold or mildew, symptoms include excessive coughing, nosebleed, chest pains, fever, and dizziness.

Marijuana growers have an obligation to the public to stay vigilant and ensure they don’t allow contaminated weed to enter the marketplace. Mold tends to target marijuana in the final two weeks before harvest and the two weeks after. As mold travels so quickly, the more weed you grow, the more targets mold has. Therefore, it is prudent to inspect your plants daily.

The Best Companion Plants for Your Cannabis Garden [Revealed]

The multi-dimensional way to protect your garden.

Diatomaceous Earth and Cannabis Growing [What Are the Benefits?]

Should you be using it?

How to grow this potent strain without hulking out

How to grow this heavenly strain

How to grow this magnificent medicinal strain

How to grow this mysterious strain

How the time of year affects your marijuana garden

What Is a Feed Chart? [Learning to Grow Marijuana 101]

A must have for all growers

5 Things You Can Do with Your Male Cannabis Plants

Waste not, want not!