If you regularly smoke cannabis, you’ll likely have heard old-timers express how marijuana was seldom as potent as today’s strains. During the 70s and earlier, a lot of marijuana likely had THC contents way below 10%. It is estimated that most strains had less than 5%. Nowadays, it is normal to see a strain contain more than 25% THC.

In the 1970s, around 72% of cannabis was illegally brought into the United States. Most of this product contained stems, flowers, leaves, and other parts of the plant. Hydroponic systems in the 1980s enabled more Americans to grow their weed at home, which improved the potency.

Finally, in the 2000s, there was a greater emphasis on growing quality marijuana in the U.S. It eventually became legal for medicinal use in many states, and this led to a significant improvement in potency. However, we may have got it all wrong about older marijuana strains. There is evidence that the herb passed around at Woodstock is stronger than we think.

That said, there is no question that breeders have developed new techniques. As such, the classic cannabis strains you remember from your youth are probably a lot stronger now; and they still exist!

In this piece, we look at 5 classic marijuana strains that still help people get buzzed today. First, let’s quickly see why the ‘weed was weak back then’ belief is potentially incorrect.

It’s Not Your Daddy’s Weed Today, but Was His Actually Potent?

We regularly hear about the less potent cannabis of the 1960s. However, The Atlantic looked into the issue a few years ago and found that incomplete government data clouds the issue. The publication found that the testing method used in that era was not especially accurate.

We used gas chromatography at that time, which isn’t the most appropriate method of measuring cannabinoid content in weed. The process heats the test material before analysis and alters the chemical profile. As a result, it breaks down the THC molecule. The federal government has measured potency for decades, and openly admits the limitations of the equipment used.

The federal government has measured potency for decades, and openly admits the limitations of the equipment used.

Also, several of the samples used are weeks or even years old! In this instance, researchers didn’t compensate for the loss of THC during the storage process. There is also an argument that the government didn’t perform enough testing. They analyzed 3-18 batches of seized weed per annum in the 1970s. These days, they analyze well over 1,000 a year!

Yes, it is clear that, on average, cannabis is more potent today. However, we are probably paying a disservice to the marijuana of yesteryear.

Government Indica Strain 1, better known as G13, is one of the oldest marijuana strains available today. It has been around for at least 35 years, and much longer if you believe the rumors. The United States Government allegedly created the indica-dominant hybrid (70%) in the 1960s and 1970s. It was a time when they were growing native Afghani strains for medicinal purposes. 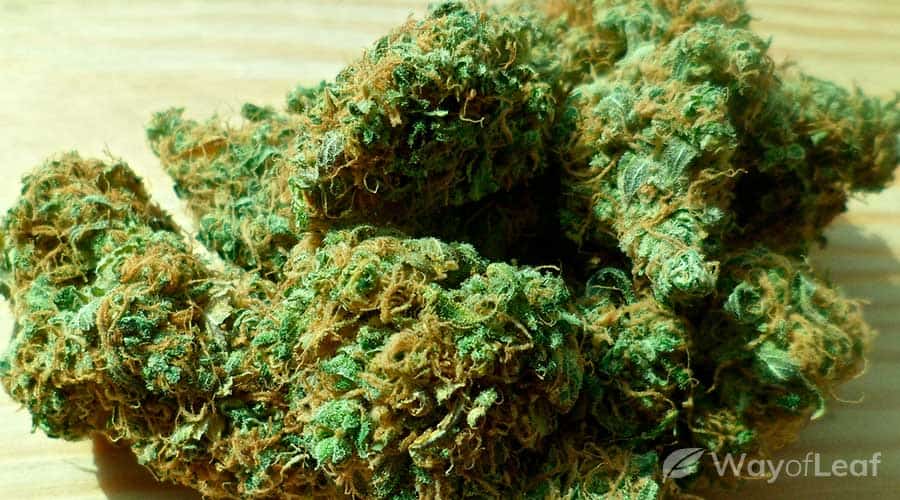 G13 is a ‘super strain’ and is remarkably powerful, with up to 24% THC. The high begins in your head, where it gives you a brief energy boost and perhaps a shot of creativity. Don’t worry; these effects don’t last too long! The cannabis strain takes over your body and starts to ease you into a relaxed state.

At this stage, you’ll have no desire to do anything but rest for hours on end. The world certainly seems like a better place when you take some G13! We recommend taking it at the beginning of the evening as you will still be talkative and energetic for a while. Ultimately, however, it will knock you out, so don’t smoke it at work.

Also known as Mexican Sativa, this legendary marijuana strain was apparently cultivated in Mexico. Today, it has a potent THC content of up to 24%. As it is challenging to grow indoors, Acapulco Gold isn’t easy to find. However, it is well worth the search if you need something substantial to help tackle headaches and anxiety. 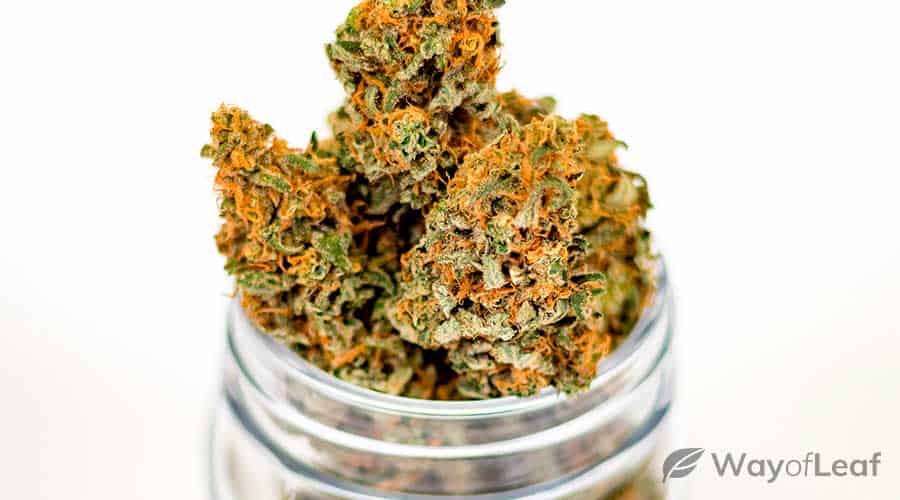 It is a common addition in breeding projects and is responsible for world-class marijuana strains such as Skunk #1 and Blueberry #11. It combines a strong head high with a delightful body high that should last for at least two hours.

The breeders created this cannabis strain to ensure that users feel a semblance of happiness. It is one of the best options if you want marijuana in a social situation. Although you may feel happy and relaxed, Acapulco Gold also provides you with energy. As a result, you feel invigorated and ready to go wherever the night takes you.

Rated #3 in a High Times list of greatest strains of all time, Sour Diesel is an outstanding 90% sativa-dominant hybrid. With up to 29% THC content, and almost 2% CBD, no one knows exactly where this strain comes from. It is frequently speculated that Sour Diesel is a mix of 91 Chemdawg and Mass Super Skunk. Some individuals also theorize it to be a blend between a Mexican Sativa and a Chemdawg phenotype.

Sour Diesel is not for insomniacs regardless of its indica presence, so if you want to consume it for sleep, a different strain would be better suited. Offering an amazingly energetic and intoxicating high, Sour Diesel is unquestionably the selection to have a jovial time, hardly ever producing a sense of couchlock.

At first try, one quickly realizes how scrumptious this strain is, but it doesn’t give you long to think about the flavor, quickly melting into blissful euphoria. This soon transforms into an uplifting and energizing experience, that lasts for an especially long time, often up to nearly five hours.

Sometimes reffered to as Nevil’s Haze, Original Haze has quite an extensive history. Originally the creation of the Haze Brothers in California, it was later brought in the 1980s by Sam the Skunkman (Dave Watson) to Amsterdam. The genus breeder Nevil worked endlessly to perfect the strain, backcrossing and stabilizing it, and out came the Original Haze we know today.

Nowadays, this perfectly pure sative boasts about  10% and 20% THC, so it is potent enough to appeal to the more intense cannabis consumers, but mellow enough to be well-rounded and accessible to most. Known for its spicy and sweet taste, mny report the most delicate undertone of citrus topping off the sultry combination. Having an initially slow build-up, eventually the strain hits hard and fast. Some even say the experience is almost psychedelic-like.

Best avoided by those who tend to be anxious or paranoid when consuming cannabis, those who want to manage their chronic pain or headaches might consider Original Haze.

30 years ago, Norther Lights #5 was a  Cannabis Cup winner in Amsterdam and now it is still a timeless classic. At your local dispensary, you’re likely to find versions of Northern Lights #5 that boast well over a 20% THC content, so the strain has definitely become more potent over the years.

Made up of primarily indica geneticd, 95% to be exact, this cannabis strain is still widely loved all over the world, even after all these years. Just remember – Northern Lights #5 is not for lightweights. It is greatly important to build up a tolerance before taking on proper inhalations of this baby. 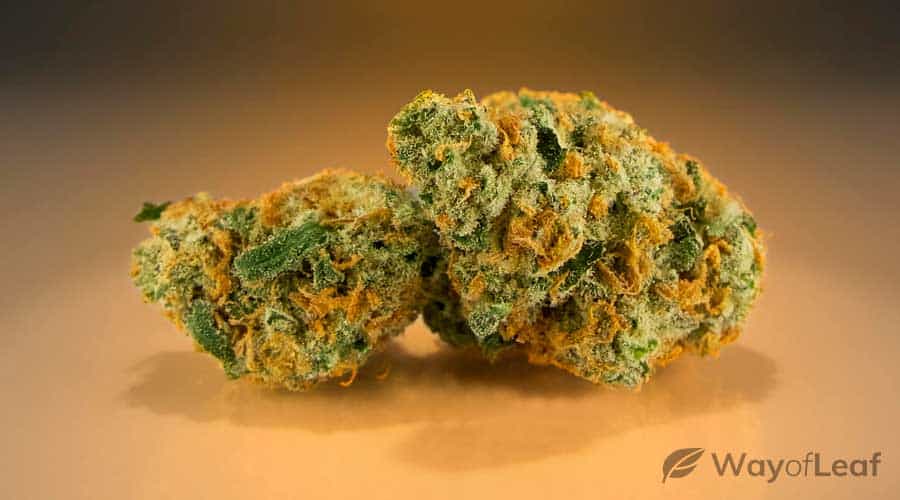 If you’re more experienced and can handle the energy of Northern Lights #5, you just might be rewarded with feelings of well-being and elation.

They say that classic things never truly go out of style. This is undoubtedly the case with old school marijuana strains. There are simply hundreds of marijuana strains available, and low-quality weed is quickly tossed aside and forgotten about. Therefore, older strains must be of exceptional quality to compete with the newer bud. Every entry on this list easily meets this exacting standard. Now, if you don’t mind, we’re going to light up some G13 and listen to The Doors!

Top strains when you're stuck inside

13
2 min read
Join The Discussion
TOC
Premium
Your subscription has ended
If you love cannabis and want to support our site, join WayofLeaf Premium today and unlock
Best of all, part of your membership fee will go towards supporting the fight to legalize cannabis.
Sign Up for WoL Premium
Not now
I already have an account
×
Log in to Your Premium Account