Cannabis for Menopause: Does It Help?

Menopause is not a medical condition, but it can cause various symptoms, including hot flashes, insomnia, anxiety, and more. These issues can range from mild to debilitating, and they can significantly impact one’s quality of life. Furthermore, they may occur for several years before and after menopause itself.

As cannabis’ medical benefits become more well-known, some may be wondering whether it could relieve troublesome menopause symptoms. However, in some cases, it may do more harm than good. Here is our complete guide to cannabis and menopause.

What Is Menopause? A Brief Overview

Menopause officially occurs 12 months after the final menstrual period. In economically developed countries, it typically happens between ages 45 and 55, the average age being 51.

The years leading up to this time point are known as perimenopause. During this transitional phase, estrogen and progesterone (the female reproductive hormones) begin to decrease.

Hormonal changes cause the menstrual cycle to become increasingly irregular until it eventually stops.

Meanwhile, other hormones involved in the menstrual cycle, such as luteinizing hormone (LH) and follicle-stimulating hormone (FSH), rise.

These hormonal changes cause the menstrual cycle to become increasingly irregular until it eventually stops. They can also generate a range of symptoms that affect menopausal individuals to varying degrees.

Some of the most widely reported menopause symptoms include:

In addition to controlling the menstrual cycle, estrogen has a protective effect over many of the body’s systems. They include the bones, cardiovascular system, and brain. Therefore, the risk of several chronic health conditions can increase following menopause. For example:

Related article
172 Conditions that Medical Cannabis Can Help With

The most common treatment for menopausal symptoms is hormone replacement therapy (HRT), sometimes known as menopausal hormone therapy (MHT). These artificial hormones act as a substitute for natural ones as they decline.

However, studies such as the famous Women’s Health Initiative have highlighted several issues associated with HRT. They include an increased risk of breast cancer, pulmonary embolism, and stroke, among others.

Although current prescribing guidelines suggest that HRT is safe for many individuals, some are still reluctant to take it. Therefore, more people are seeking natural alternatives, although there is often little evidence to support their use.

So, what does the research say regarding cannabis for menopause? Let’s take a look.

Does cannabis help with menopause? There is a lack of research on the subject specifically. However, there is evidence regarding efficacy for many of the symptoms that may occur during and after the menopausal transition. 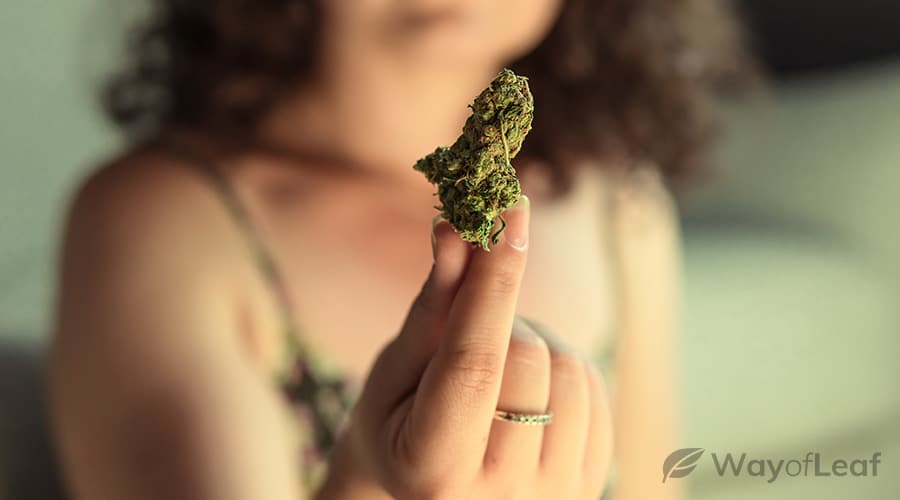 Below is our symptom-by-symptom guide. We will discuss the effects of various cannabinoids, including tetrahydrocannabinol (THC), the intoxicating chemical in cannabis, and non-intoxicating cannabidiol (CBD).

Insomnia and sleep problems are common throughout the menopausal transition. These issues could be a direct result of vasomotor symptoms, anxiety-related, or have no obvious cause.

Many people assume that cannabis can improve sleep. Anecdotal reports suggest that certain cannabis strains may have calming and sedating effects. Furthermore, a number of cannabis terpenes, such as myrcene and linalool, may have relaxing properties, as discussed in this 2011 review.

However, when it comes to scientific research, the jury is still out. A 2017 review suggests that THC could reduce the amount of time it takes to get to sleep. However, it could also impair sleep quality in the long run.

But according to the researchers behind the above review, CBD may provide some benefits. They state that it could potentially help with REM sleep disorders and daytime drowsiness.

According to a 2019 case series, CBD may also be useful for anxiety-related sleep disorders. The study’s authors found that both sleep and anxiety scores improved within the first month of CBD treatment. However, while anxiety scores remained consistently reduced, sleep scores fluctuated over time.

Menopause is often associated with symptoms such as depression, anxiety, and mood swings. These issues may arise due to hormonal fluctuations or stress relating to aging and one’s changing body. Other challenges relating to work, relationships, or family dynamics may also contribute.

Research suggests that approximately 50% of medical cannabis patients use the plant to relieve depression. Anxiety is another common reason for cannabis use. However, evidence to support these applications is limited.

Approximately 50% of medical cannabis patients use the plant to relieve depression.

The current research primarily involves THC-containing cannabis strains. THC is a biphasic compound, meaning it produces different effects depending upon the dosage. So, while low THC doses can decrease anxiety symptoms, higher doses may increase them.

On the other hand, CBD does not tend to cause anxiety as a side effect. Various studies have found it beneficial for a range of anxiety disorders, including:

Vaginal dryness and atrophy are also common menopause symptoms. They can cause uncomfortable sensations such as burning or itching and may make sexual intercourse painful.

There is currently no scientific evidence that THC or CBD can help vaginal dryness. However, many companies are now selling cannabis-infused lubricants. Proponents claim that they can reduce pain in the pelvic region and make intercourse more comfortable, though again, these claims are not backed by research.

Many cannabis users say that some varieties of the plant can increase sexual arousal. There is not much scientific evidence to support these claims, although some research suggests it could help.

A 2019 study found that most women who used cannabis before intercourse reported several benefits. They included:

However, the study did not find any alterations in vaginal lubrication following cannabis use.

Related article
Does Cannabis Improve Libido? [What Does the Research Say?]

Could it benefit your sex life…

Weight gain is also typical during and after the menopausal transition. While there is no substitute for adequate physical activity and a healthy diet, cannabis may also help.

This may be counter-intuitive since cannabis is known to increase appetite, causing a phenomenon known as ‘the munchies.’ However, research has shown that despite an increased calorie intake, cannabis users tend to have lower body mass index (BMI) gains than non-users.

Experts have suggested that cannabinoids may have a regulatory effect on body weight and metabolism, although more research is required.

Weight gain can lead to a variety of other problems, including type 2 diabetes. However, not everyone who develops diabetes is overweight. There is now research that suggests the endocannabinoid system (the physiological system with which cannabis interacts) may be involved. Therefore, some have begun to hypothesize that cannabis could help.

Although the evidence is mixed, there are several mechanisms by which cannabinoids may offer some protection against diabetes. For example, CBD is known for its anti-inflammatory effects, and inflammation often plays a role in diabetes development.

There are several mechanisms by which cannabinoids may offer some protection against diabetes.

Another cannabinoid that is showing promise is tetrahydrocannabivarin (THCV). Research has shown that it can improve glucose tolerance and insulin sensitivity in mice. Further animal studies suggest THCV could improve glycemic control and regulate appetite. It remains to be seen precisely how these results translate to humans.

Diabetes often occurs alongside issues such as high blood pressure and high cholesterol. The prevalence of these conditions also increases with age. Furthermore, estrogen, which declines in menopause, has a protective effect over the cardiovascular system. Together, these factors significantly increase the risk of heart disease.

Cannabinoids have several distinct effects on the cardiovascular system. They induce vasodilation, meaning that they make the blood vessels relax and widen. This effect causes the blood pressure to reduce temporarily. However, to compensate, the heart rate tends to increase. Therefore, cannabis has been linked to an increased risk of heart attacks in susceptible individuals.

That said, there is also some evidence that CBD, especially, may have a protective influence over the cardiovascular system. This is primarily due to its anti-inflammatory and antioxidant effects. However, some research suggests CBD could also affect cholesterol metabolism, providing potential benefits.

Due to these conflicting findings, anyone with pre-existing cardiovascular conditions should consult a physician before cannabis use.

Research has shown that the endocannabinoid system may be involved in bone metabolism and loss. Therefore, cannabinoids could potentially influence bone health. However, there is contradictory evidence, and it is unclear whether cannabis impacts the bones for better or worse.

For example, a 2015 study suggests that CBD can stimulate bone-producing cells and enhance fracture healing. However, a 2016 publication found that heavy cannabis use reduces bone mineral density. Moderate cannabis use did not appear to have a significant effect.

It is unclear whether these disparities are due to differences between THC and CBD or whether they are dose-dependent.

Related article
CBD for Osteoporosis & Bone Health [How It Works]

Scientists are still trying to determine precisely how cannabis impacts the brain and memory. Some have suggested it impairs memory and other cognitive abilities. However, this may be dependent on the degree and duration of use.

Conversely, CBD may help to protect the brain and slow mental deterioration. It has neuroprotective properties and has been promoted as a potential preventative therapy against neurodegenerative diseases like dementia and AD.

Other research has found cannabis promising in the treatment of dementia. It could relieve various symptoms, including:

However, the evidence is somewhat inconclusive, and far more research is required.

Final Thoughts on Cannabis and Menopause

There is not enough research available to say for sure whether cannabis is helpful or harmful during menopause. It seems that it could be beneficial in certain circumstances, although it may not work for everyone.

Therefore, it is essential to consult a health care provider before trying cannabis for menopause. They can help to monitor its effects and ensure that it is safe to continue use.

Best Cannabis Strains for Parkinson’s Disease? Here Are the Facts…

23
7 min read
Join the discussion
TOC
Premium
Your subscription has ended
If you love cannabis and appreciate our content, join WayofLeaf Premium today and receive:
Best of all, part of your membership fee will go towards helping to legalize cannabis.
Go Wayofleaf Premium
No thanks, I can't afford it
I already have an account
×
Login in to your premium account