Odds are, you have probably heard of Crohn’s disease before; maybe a loved one, family member, friend, or even you yourself are suffering with some of the painful symptoms of this disease, and are looking for ways to help mollify them.

Whatever your ‘relationship’ with the condition, you likely already know just how painful and debilitating the symptoms of Crohn’s disease can be.

Whatever your ‘relationship’ with the condition, you likely already know just how painful and debilitating the symptoms of Crohn’s disease can be.

And while strong painkillers and prescription medications can often times help relieve the abdominal discomfort and sharp, shooting pains that come along with the disorder, we all know the long-term dangers that are involved with these types of drugs.

As such, many people have recently begun turning to marijuana’s anti-inflammatory, pain-relieving effects to help them garner a safer, more natural form of treatment for the many symptoms that are involved with Crohn’s. In this article, you will find valuable information all about this cumbersome disease, as well as recommendations on 5 of the best marijuana strains for Crohn’s disease that are currently available.

[Want to learn more? Keep on reading to discover 5 of the best marijuana strains for Crohn’s disease…]

More than 700,000 individuals suffer from Crohn’s disease in just the United States alone, with that number of course increasing drastically if you include the entirety of the earth’s population. This is, in part, why education regarding this medical condition is so vital – as well as continued research and funding. 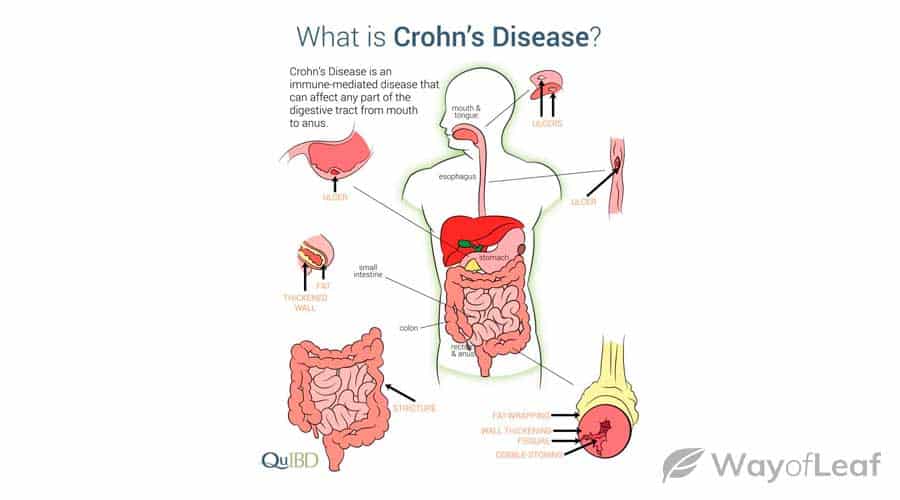 Ultimately, each individual with Crohn’s disease experiences the condition in a different manner; there’s a huge discrepancy in both the extremity of symptoms and the type of symptoms you can have if you are diagnosed with Crohn’s – a disease that is largely related to specific locations within the GI tract.

People that are diagnosed with Crohn’s disease tend to follow a pattern of severe symptoms and remission, where they often cycle between the two back and forth.

Remissions can last for a variety of lengths of time, from days to weeks to years, which is part of what makes this condition so unique and personal for each patient.

Crohn’s disease specifically involves inflammation of a location within the digestive tract, typically in one primary targeted region. Inflammation of the end of the small intestine where it meets with the colon is the most common, but any portion of the GI tract can be affected – from the mouth down to the anus. It is classified as Chronic Inflammatory Bowel Disease, or IBD.

If you believe you might have Crohn’s disease, it is important to immediately contact your doctor or a medical professional. There are a variety of tests they can conduct to see if your symptoms are in fact related of Crohn’s.

These tests primarily include blood tests (including fecal blood tests and antibody tests), as well as imaging tests like x-rays and ultrasounds.

Because of modern-day pharmaceuticals, many patients struggling with Crohn’s disease can live fairly normal and pain-free lives.

Because of modern-day pharmaceuticals, many patients struggling with Crohn’s disease can live fairly normal and pain-free lives, as long as they have access to reliable treatments and medication. Of course, though, some patients choose to turn towards medical cannabis for relief. If you or someone you know has Crohn’s disease, let them know that there is hope, and there are natural solutions to feel better.

Causes and Symptoms of Crohn’s Disease

Scientists still do not have a clear answer as to what is the cause of Crohn’s disease, although some believing that stress levels and quality of diet are mostly to blame. Currently, though, it is assumed that these circumstances only increase the extremity of the condition, but do not actually create it.

Other possible conditions that may lead to the onset of Crohn’s include genetics, environmental conditions, and even a malfunctioning immune system. Ultimately, however, further research desperately needs to be conducted so that society can understand more about this medical occurrence that affects so many people globally.

In terms of prevalence, many Crohn’s disease diagnoses occur before the age of 30, which makes the condition one that affects the young as well as the elderly.

Moreover, statistics have shown that those residing in more northern latitudes or industrial environments are more likely to be diagnosed with Crohn’s – as odd as that may sound. Also, if you have a relative with Crohn’s, you are more likely of acquiring the disease, as are those with Jewish and/or European lineage (data shows that these are the most likely of any ethnic group to develop Crohn’s disease).

In terms of symptomology, there are a multitude of symptoms that can occur as a result of Crohn’s disease, affecting both the mind and the body. Naturally, the type of symptoms that are presented will typically relate to the specific region of the GI tract that is being impacted (and is therefore inflamed).

The most common symptoms, however, include:

As you can see, the extent of Crohn’s disease symptoms are quite lengthy, so it is important to watch for any specific symptoms and discuss those occurrences with your doctor or medical practitioner if you believe you might be suffering from the condition.

Additionally, just because one has the presence of a symptom such as these, does not mean they have Crohn’s disease – it could be the result of a variety of other possibilities. A doctor will be able to conduct tests that can provide accurate answers.

There is currently no cure for Crohn’s disease, but medical practitioners are able to use conventional medical treatments to slow down or lessen the severity of the disease so that the individual affected can lead a more comfortable life.

These practices have some variation, but mainly involve medications and surgery. Commonly prescribed medications for Crohn’s Disease patients include:

Surgeries are also typically conducted as a result of a complication of Crohn’s disease, such as to repair a hemorrhage, abscess, fistula or obstruction. In fact, a fair majority of Crohn’s patients will potentially require surgery at some point in their lifetime.

Medical Marijuana for Crohn’s Disease: Is it a Reliable Treatment?

Although there is no research or clinical evidence that exists to support the claim that medical cannabis can cure Crohn’s disease, the disorder is one of the qualifying conditions that is included in most states that offer medical marijuana programs. 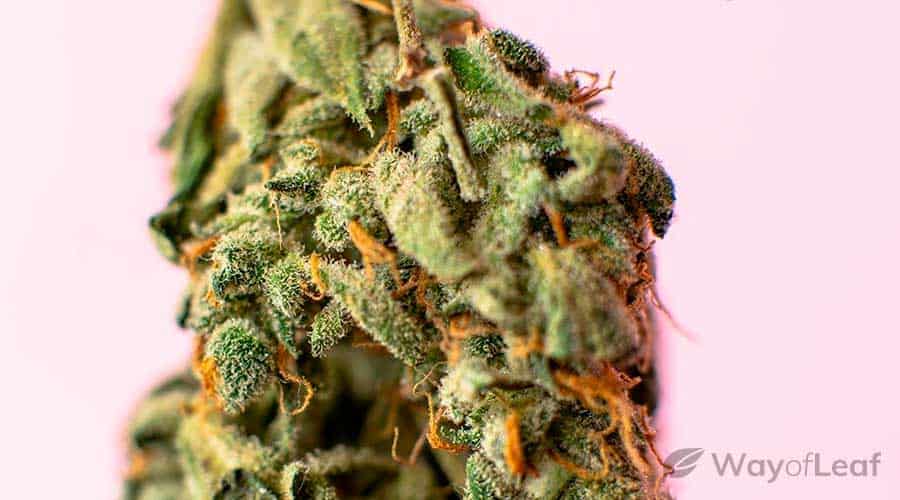 In other words, Crohn’s disease is recognized by the majority of the medical cannabis industry due to current data that supports marijuana as a reliable form of treatment.

There are countless firsthand reports claiming the usefulness of marijuana.

Additionally, there are countless firsthand reports claiming the usefulness of marijuana in assisting to minimize various symptoms that are a result of Crohn’s disease. Some of the symptoms of Crohn’s that marijuana has been known to help includes:

As you can see, if you are searching for a natural alternative to conventional medications to manage the painful symptoms of Crohn’s, cannabis might be your answer to success and relief. Keep reading to learn about five beneficial marijuana strains that have been specifically known to help with some of the symptoms of Crohn’s disease.

If you are wondering which marijuana strains can assist with minimizing the painful and uncomfortable symptoms of Crohn’s disease, here are 5 types that might be the right fit: 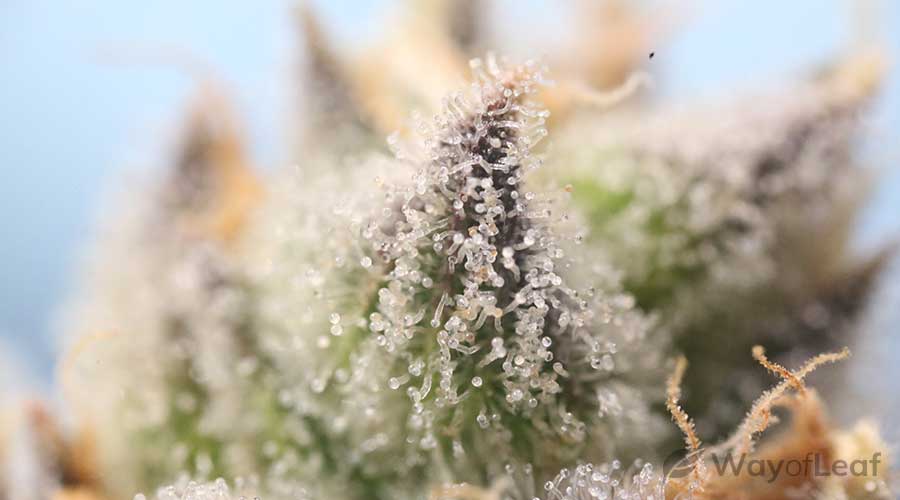 Idolized for its intensely indica-dominant sedative effects, Chemo is brilliant at numbing chronic pain, as well as increasing appetite and reducing nausea. For Crohn’s disease patients who have lack of appetite, trouble eating or painful cramping, this marijuana strain could very well be a healing option. 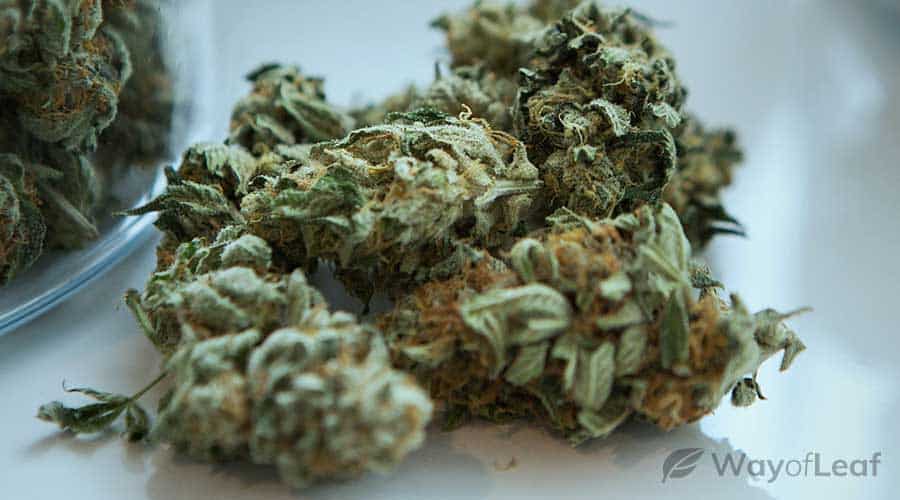 Equally as sedative as Chemo, this indica brings about an intense body high that lets your body melt and sink deep into the couch. Hash Plant weed is packed full of crystalline THC trichomes, which are believed to help relieve chronic pain and inflammation – both of which are very common symptoms of Crohn’s disease. This would be a wonderful selection to try before bedtime, or during the late evening hours. 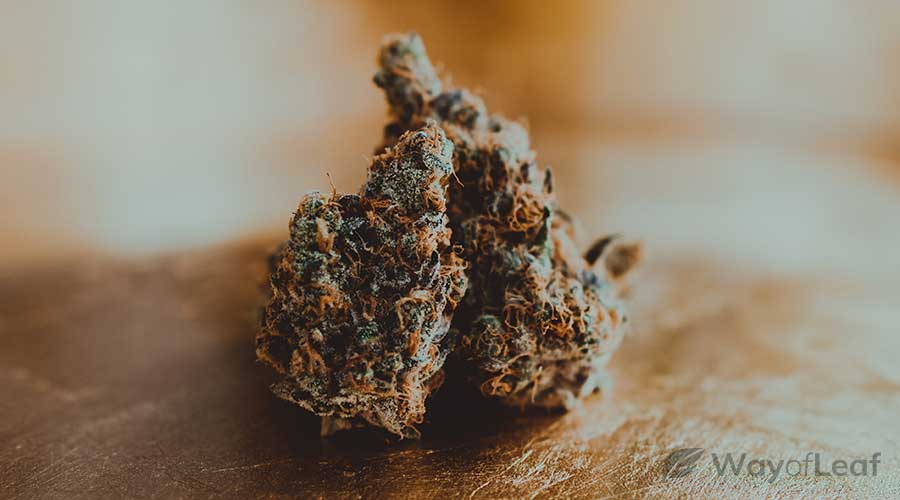 This energizing sativa-dominant marijuana strain works has been known in the past to work like a charm for those suffering from anemia as a result of Crohn’s disease. Anemia can often bring about fatigue, but Lemon Jack will wake you up and make you want to start your day off with a smile – as well as plenty of motivation. This strain is probably best consumed in the morning right after you wake up, or as a midday pick-me-up. 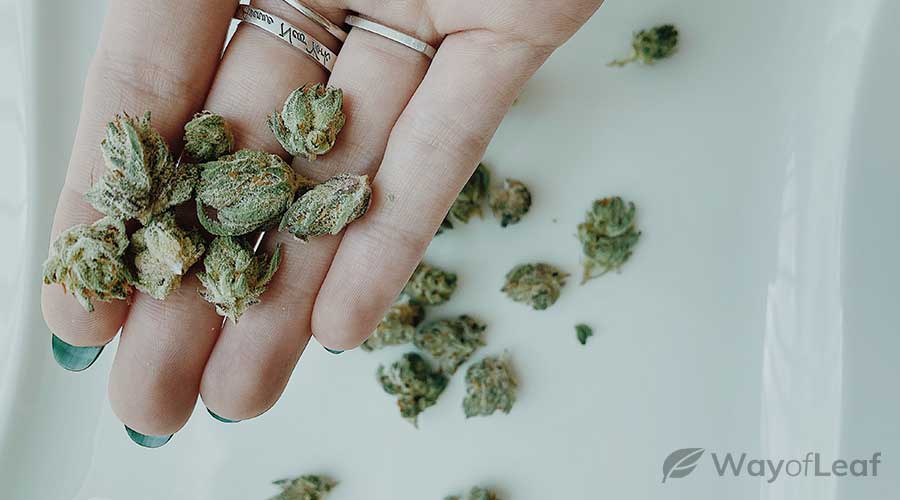 An inspirational and motivation-bringing hybrid marijuana strain that encourages creative energy and productivity, Golden Pineapple works well at relieving anxiety, depression and stress, all while keeping the mind and body free from fatigue. An essential balance between relaxing and energizing. 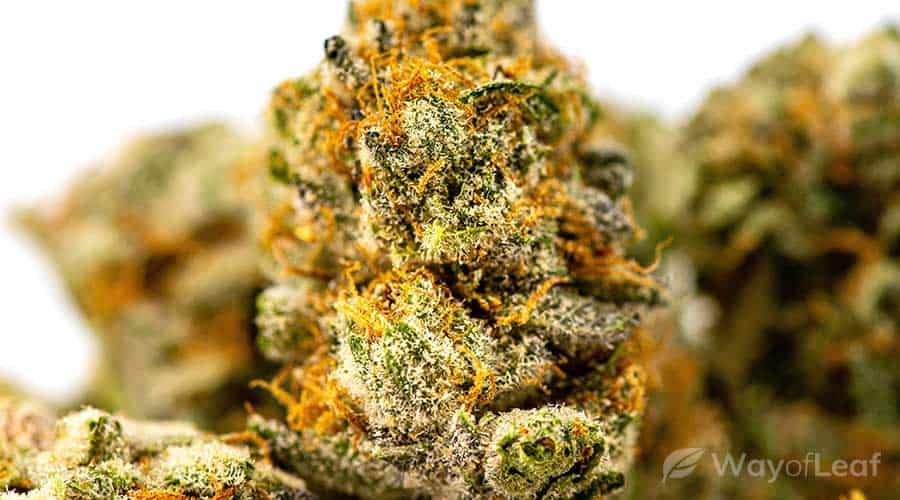 A powerful blend between Hindu Kush and White Widow, K2 has been know to help relieve nausea and increases appetite, all while keeping the body and mind awake, alert, and assisting fatigue and feelings of brain fog or sleepiness. This makes it a great pick for Crohn’s disease patients who are having difficulties with eating, but also don’t want to turn towards a munchie-bringing indica that will tire them out.

Final Thoughts on the Best Marijuana Strains for Crohn’s Disease

If you or someone you know is suffering from one of the Crohn’s disease symptoms above and is looking for a medicinal alternative to strong prescription drugs, these 5 marijuana strains might just be the answer.

Though much more research is needed in order to determine how specifically weed helps with various symptoms, the bottom line is that Crohn’s is an inflammation-based disease, and one of the strongest therapeutic properties of cannabis is as an anti-inflammatory.

We hope that this review on the best marijuana strains for Crohn’s disease was helpful, and we wish you the best of luck in your pursuit of a happier, healthier, more natural lifestyle.

Related article
CBD Oil for Ulcerative Colitis [How It Works]

7
5 min read
Join the discussion
TOC
Premium
Your subscription has ended
If you love cannabis and want to support our site, join WayofLeaf Premium today and unlock
Best of all, part of your membership fee will go towards supporting the fight to legalize cannabis.
Sign Up for WoL Premium
Not now
I already have an account
×
Log in to Your Premium Account