The Yin and Yang of Cannabis and Psychosis

Oriental medicine practitioners often strive to understand modern diseases in terms of yin and yang. One interesting example is how cannabis is related to psychosis. On the one hand, the herb has frequently been linked to the development of psychosis. On the other, new research suggests that one of its components, CBD, could actually help in the management of this serious psychiatric disease.

What Are Yin and Yang?

The ancient oriental concept of yin and yang describes how all things in nature exist in a state of perfect balance and harmony. Yin and yang are complementary opposites. They represent night and day, cold and warmth, water and fire, female and male. Furthermore, yin and yang are not seen as two separate entities but two halves of one whole. Nothing can ever be entirely yin or entirely yang.

Yin and yang are not seen as two separate entities but two halves of one whole.

Yin and yang exist within the human body as well as in the natural world. The sympathetic nervous system can be considered yang. It is responsible for our ‘fight or flight’ reaction and allows us to launch into action in the face of either perceived or real danger. The parasympathetic nervous system can be considered more yin. It is responsible for our ‘rest and digest’ function and allows our bodies to recover and repair themselves after a stressful day.

When yin and yang are perfectly in balance, the body and mind will be healthy and free from disease. But some believe that when these powerful forces fall into disarray, illness could occur. Let’s look at how this applies to cannabis and psychosis.

There is plenty of scientific evidence linking cannabis use to psychosis. Statistics suggest that it is involved in as many as 50% of cases of psychosis, schizophrenia, and schizophreniform psychosis. The risk is increased in people who start using marijuana in their teens as their brains are still developing.

The exact cause-effect relationship between cannabis and psychosis has still not been fully established. However, there are several theories as to why it occurs. It is thought that, in certain genetically susceptible individuals, THC (the psychoactive compound in cannabis) can trigger the onset of psychosis. One survey of high-risk and recent-onset patients with psychosis found that in 37% of cases, symptoms first appeared during cannabis use.

Related article
How Does Marijuana Impact the Brain of a Teenager? [The Facts]

Scientists believe that THC can cause neurological dysfunction by altering the effects of neurotransmitters such as dopamine. Neurotransmitters are chemicals that influence our mood and thought processes, among many other things.

When healthy individuals use cannabis, it is these changes that produce the sensation of being high; altered mood, perception, attention, and memory. However, in people who are susceptible to psychosis, these changes could be enough to trigger a complete break from reality.

Psychosis and The Endocannabinoid System

It is unclear exactly why THC affects certain people in this way and not others, although researchers are getting increasingly closer to finding the answer. It appears that people who develop psychosis or schizophrenia may have an imbalance in their endocannabinoid systems. 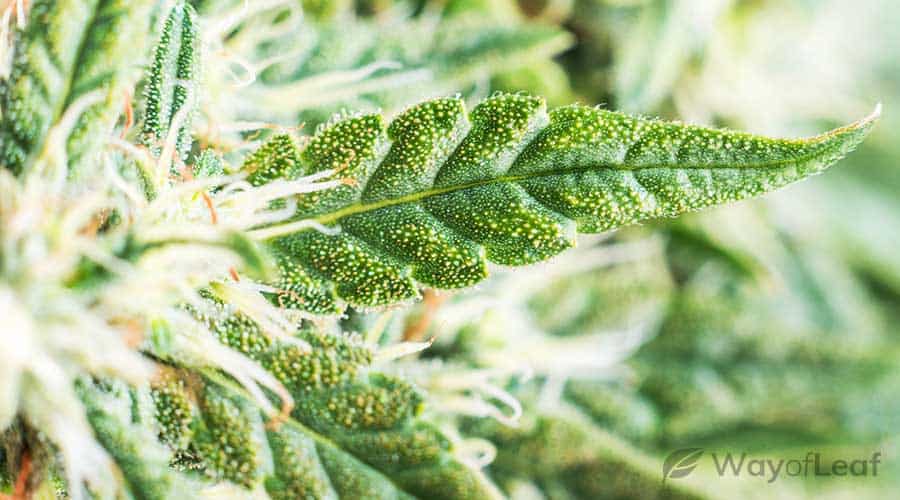 The endocannabinoid system consists of CB1 receptors, found mainly in the brain and nervous system, and CB2 receptors found throughout the rest of the body. These receptors bind with endocannabinoids, molecules produced by the body which are similar in structure to THC.

One 1999 study found that schizophrenic patients had elevated levels of anandamide and palmitylethanolamide, two of the body’s natural endocannabinoids, in their cerebrospinal fluid. Another study from 2001 found that schizophrenic patients have an increased density of CB1 receptors in their brains. Although we still do not have the whole picture, this goes some way towards explaining why cannabis and psychosis sometimes go hand in hand.

The Yin and Yang of Cannabinoids

The component of cannabis that is associated with psychosis is THC, but the cannabis plant contains a myriad of other active compounds, including CBD, CBG, CBN, terpenes, and many more. All of these compounds affect the body in slightly different ways. In this article, we will look at the two major cannabinoids, THC and CBD, and terpenes, the aromatic oils that give marijuana its distinctive smell.

As we have already mentioned, THC is the compound that gives marijuana its psychoactive properties and in some people, may trigger psychosis. The effects of THC can be euphoric, inducing a sense of relaxation and general well-being. However, it can also cause less pleasant side effects such as anxiety, paranoia, suspicion, and fragmented thoughts. Some people may even feel disconnected from reality or experience sensory changes or hallucinations.

Cannabinoids and Terpenes – What does the Research Say?

However, CBD appears to have the opposite effect. A study on the effects of THC and CBD on emotional processing suggests this theory. Fifteen healthy volunteers were given either THC, CBD, or a placebo, and then were exposed to images of fearful faces while undergoing MRI imaging. The results showed that while THC increased anxiety levels during the study, CBD had a much more calming effect.

The dangers of using THC alone have been highlighted by the advent of synthetic cannabinoids such as Spice and K2. The negative effects of these narcotics have been well-publicized. The results of a 2015 study by Di Forti et al. published in The Lancet also suggest that the risk of cannabis-induced psychosis rises with the use of more potent forms of the drug.

It is widely believed that CBD goes some way to balancing out the effects of THC.

It is widely believed that CBD goes some way to balancing out the effects of THC and preventing a high from becoming too much to handle. Could CBD be the yin to THC’s yang? Perhaps, but it is not quite so simple.

As well as THC and CBD, the cannabis plant contains many different chemicals that work together in a complementary fashion. Terpenes are another essential constituent of cannabis that are thought to have a wide range of physiological effects.

It appears that when it comes to creating a balanced and enjoyable high, nature really does know best. The way that the compounds in cannabis work together synergistically to influence the human body has become known as the ‘entourage effect.’

Can CBD Help with Psychosis?

New research suggests that CBD could actually help with the symptoms of psychosis. Eighty-eight subjects with schizophrenia were given either CBD or a placebo alongside their regular medication for six weeks. At the end of the study, those who received CBD had fewer psychotic symptoms and felt generally less unwell.

The treatment was well-tolerated, and the rate of adverse effects did not differ significantly from the placebo. Although there is no doubt that more research is required to understand the full implications of this, it seems that CBD in combination with medication could potentially help in the treatment of psychosis.

CBD is available as an oil, capsules, edibles, e-liquids, and in many other forms. There are also now many cannabis strains that boast high CBD levels while still being low in THC. However, we do recommend that you talk to your physician before using any of these products to confirm whether they are suitable for you. You should also keep taking any prescribed medication unless your doctor recommends discontinuation, even if you feel much better.

The Yin and Yang of Marijuana and Psychosis: Final Thoughts

The relationship between cannabis and psychosis is a complex one and is still not fully understood. What some studies do suggest, however, is that THC may play a role in triggering psychosis in susceptible individuals and that CBD may have beneficial effects in the management of this condition.

If you are concerned about the link between cannabis and psychosis, or if you want to know more specifically about THC or CBD and psychosis, talk to a healthcare provider.

Cannabis for Menopause: Does It Help?

Understanding how it helps

9
3 min read
Join the discussion
TOC
Premium
Your subscription has ended
If you love cannabis and appreciate our content, join WayofLeaf Premium today and receive:
Best of all, part of your membership fee will go towards helping to legalize cannabis.
Go Wayofleaf Premium
No thanks, I can't afford it
I already have an account
×
Login in to your premium account