Written by Natalie Saunders, B.A., LicAc
6 min read
1 comments
Read Later
All information on this website is for general informational purposes only and is not intended or implied to be a substitute for professional medical advice, diagnosis or treatment.

Carpal tunnel syndrome is a common cause of neuropathy (nerve pain). It causes a range of uncomfortable symptoms that affect the fingers, hands, and arms.

Unfortunately, effective carpal tunnel therapies are limited. While some treatments can help patients manage their symptoms, they often carry a high risk of side effects. Furthermore, they do little to tackle the underlying cause of the pain.

In recent years, cannabis-based medicines such as marijuana and CBD oil have emerged as potentially effective treatments for neurological pain. But does cannabis help carpal tunnel syndrome? We investigate.

What Is Carpal Tunnel Syndrome?

The term ‘carpal tunnel’ describes a narrow passageway in the wrist. It allows the median nerve to travel from the forearm to the hand. This nerve is responsible for movement and sensation in the palm, thumb, and first three fingers.

If the carpal tunnel becomes swollen, it can press on the nerve causing unusual feelings and pain. This phenomenon is what we know as carpal tunnel syndrome.

It is the surrounding anatomy pressing on the median nerve that causes the symptoms of carpal tunnel syndrome.

The symptoms of carpal tunnel syndrome usually come on gradually and worsen over time. They tend to affect the patient’s dominant hand first but can eventually affect the non-dominant side too.

These symptoms usually affect the thumb, index finger, and middle finger. They are often worse at night, and patients may wake up with pins and needles or numb hands.

Carpal tunnel syndrome occurs when the narrow passageway between the arm and hand presses on the median nerve. It might happen for various reasons, including the following: 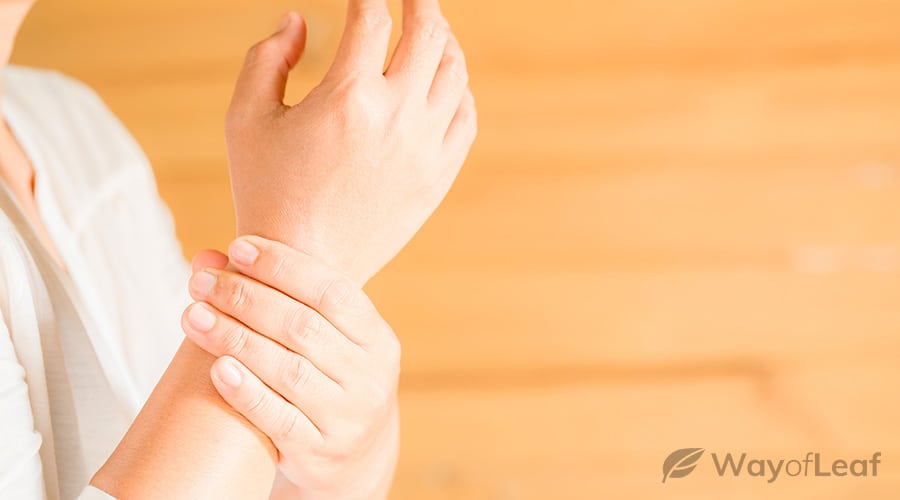 Carpal tunnel syndrome is more likely to affect people who are overweight or pregnant. It can also occur in association with certain medical conditions, including:

In many cases, carpal tunnel syndrome will resolve with rest and abstinence from aggravating activities. People suffering from this condition can potentially speed up their recovery by:

If a patient’s carpal tunnel syndrome does not respond to the above methods, their doctor may prescribe a steroid injection. The aim is to reduce inflammation in the wrist and reduce pressure on the median nerve. However, these injections sometimes only provide temporary relief, and repeated use may cause further issues.

Another option is surgery for carpal tunnel syndrome, although this is usually a last resort. Due to the risks of surgery, doctors only recommend it in extreme cases. That said, carpal tunnel correction remains one of the most common operations in the USA.

For those seeking a more natural alternative, it seems that marijuana and CBD could offer some hope.

One reason why people use medical marijuana is for pain relief, including neuropathic pain. It works by influencing the body’s in-built endocannabinoid system (ECS).

The ECS is a complicated network of cell receptors and chemicals called endocannabinoids. Together, they act as a kind of signaling mechanism throughout the body. They are involved in memory, mood, movement, and appetite, to name just a few of their many functions.

The ECS is also involved in the transmission of pain signals. A type of cannabinoid receptor known as CB1 is prevalent throughout the nervous system and brain. Scientists believe that here, endocannabinoids inhibit the release of neurotransmitters, stopping painful messages in their tracks.

Related article
Medical Cannabis, CBD, and Nerve Pain: What You Need to Know

It is also here that cannabis exerts its analgesic effects. One of the chemical compounds in marijuana, THC, has a similar molecular shape to our endocannabinoids. Its structure allows it to bind with CB1 receptors and have a comparable effect.

However, the body breaks down THC far more slowly than it does our natural endocannabinoids. This means the effects of cannabis can last for a much longer time. Marijuana’s powerful stimulation of the CB1 receptors is also what causes its characteristic high.

Unfortunately, the intoxicating effects of cannabis are off-putting for some people. A 2018 study into cannabis and nerve pain for The Cochrane Database of Systematic Reviews provided interesting results.

Luckily, if you want to benefit from cannabis for carpal tunnel without the high, several options are available.

Most of the current research on cannabis for pain has focused on the psychoactive compound THC. However, in the past few years, more information has emerged regarding its non-intoxicating counterpart, CBD.

Although CBD does not bind with cannabinoid receptors as THC does, it still strongly influences the ECS. It appears to slow the breakdown of endocannabinoids and, therefore, enhance their effects. 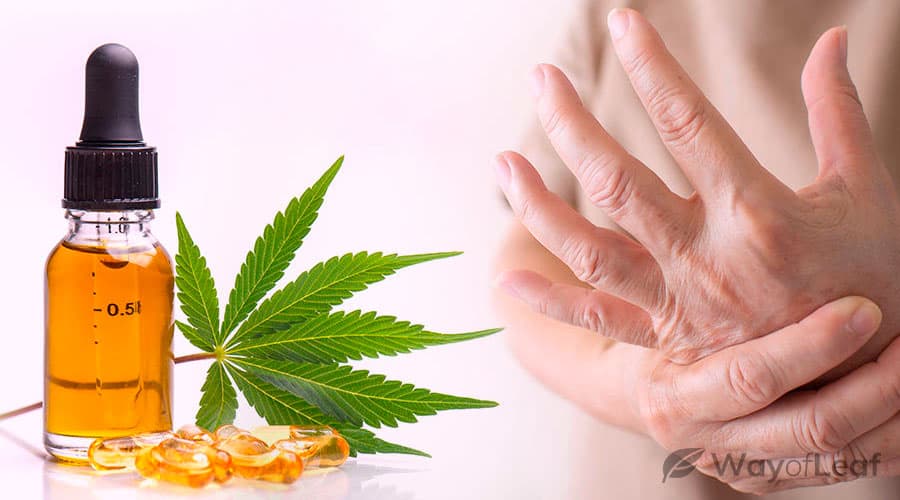 CBD also interacts with several other physiological systems. One of these is the family of transient receptor potential cation vanilloid (TRPV) receptors. These receptors play a vital role in sensory perception, including pain.

How to Use CBD for Carpal Tunnel Syndrome

Most people use CBD in oil form by placing a few drops under the tongue. Doing this allows the cannabinoid to bypass the digestive system and pass directly into the bloodstream.

Topical preparations are another popular method of using CBD. They allow consumers to apply the cannabinoid to the area of the body where it is needed most. Therefore, patients using topical CBD for carpal tunnel could massage it directly onto their wrists.

When choosing a CBD product, consider selecting a brand that uses full-spectrum CBD.

When choosing a CBD product, consider selecting a brand that uses full-spectrum CBD. These products contain a range of other cannabinoids along with compounds called terpenes.

These chemicals may have anti-inflammatory and pain-killing effects of their own. Furthermore, some experts believe that they work together synergistically in something called the ‘entourage effect.’

Another thing to look out for is third-party lab reports. These prove that a product contains all that it should and nothing more. These reports are a good indication that a brand is legitimate and confident in the quality of its CBD.

Finally, select a product that is strong enough for your needs. However, the exact CBD dosage for carpal tunnel syndrome varies from person to person and depends on many different factors.

For more on this topic, see our article on how to dose CBD oil properly.

Whether an individual prefers to use THC or CBD for carpal tunnel, there is probably a suitable cannabis strain for them.

Some of the most popular high THC strains for carpal tunnel include the following. They have not been scientifically proven to help the condition, but user reports suggest they may relieve pain and improve sleep.

Individuals that prefer something with a higher CBD content and low levels of THC could try:

For the best of both worlds, pick a strain like Harlequin. This sativa-dominant hybrid boasts an almost 1:1 ratio of THC to CBD, imparting a mild and manageable high.

Final Thoughts on Marijuana and CBD for Carpal Tunnel Syndrome

If you are suffering from carpal tunnel, medical marijuana or CBD may provide some relief.

Although there is little research into cannabis and carpal tunnel specifically, it may be effective for neurological pain in general. With so few other effective treatments for carpal tunnel available, it is possibly worth a try.

However, you should consult with a physician before using cannabis or CBD for carpal tunnel syndrome. Always abide by your state’s specific laws and remember to use these substances responsibly.