However, with limited treatment options, many patients are left wondering whether cannabis could help Grave’s disease. The herb has received much attention lately as new research sheds light on its many potential benefits. These benefits include regulating thyroid function and keeping the immune system in check.

So, can medical marijuana help Grave’s disease? We take a closer look.

What Is Grave’s Disease?

Grave’s disease gets its name from Robert James Graves, the Irish physician who described the condition back in 1835.

Grave’s disease is an autoimmune disorder wherein the immune system produces an antibody that overrides the normal regulation of the thyroid, causing an overproduction of thyroid-released hormones (hyperthyroidism).

In Grave’s disease, the immune system overrides the normal regulation of the thyroid.

The thyroid produces several hormones, including triiodothyronine (T3) and thyroxine (T4). The release of these hormones relies on another hormone called thyroid-stimulating hormone (TSH), which the pituitary gland secretes.

These hormones control how the body uses its energy. Therefore, an imbalance in thyroid hormone levels can affect every biological system, including the cardiovascular, musculoskeletal, and reproductive systems.

People with Grave’s disease may also have a higher-than-average risk of developing cardiac abnormalities, osteoporosis, anxiety, and depression.

As previously mentioned, an overactive immune system is the root cause of Grave’s disease. In this condition, the immune system creates an antibody known as thyroid-stimulating immunoglobulin (TSI). The antibody attaches to thyroid cells where it acts similarly to TSH, stimulating thyroid hormone production. Specifically, Grave’s disease causes a relative increase of T3 levels in comparison with T4.

It is unclear exactly what triggers the immune system to behave in this way. However, scientists believe that a combination of genetic and environmental factors is at play. What we do know is that the following risk factors can increase one’s chances of developing Grave’s disease:

Most experts agree that people with a predisposition to autoimmune diseases can have their conditions triggered by physically or emotionally stressful events. These could include a viral infection, surgery, or bereavement, for example.

There are currently three primary treatment options for people with Grave’s disease. These include medication, surgery, and radioiodine therapy.

Doctors may prescribe medication like beta-blockers to help with the symptoms of Grave’s disease. However, to address the underlying cause, they must use anti-thyroid medicines. These stop the production of thyroid hormones and include drugs such as propylthiouracil, methimazole, or carbimazole. Although these medications are effective, they may cause serious side effects, including rash, joint pain, or liver problems.

Surgery aims to remove the thyroid gland to prevent the overproduction of hormones. Aside from the general risks associated with surgery, this Grave’s disease treatment has another significant drawback; a lack of thyroid hormones (hypothyroidism) is just as problematic as hyperthyroidism. Unfortunately, this is the result of removing the thyroid. However, doctors generally consider hypothyroidism easier to treat than the hyperthyroidism that Grave’s disease causes.

Finally, the most common Grave’s disease treatment in the USA is radioiodine therapy. This technique uses radioactive iodine to destroy the cells that produce TSH. As with surgery, it induces a state of hypothyroidism, which doctors must then treat accordingly.

The limited range of treatment options has left many patients wondering whether natural remedies like cannabis could help Grave’s disease. To understand how medical marijuana could potentially help this condition, we must first understand how cannabis affects the human body.

Cannabis has a profound effect on both body and mind due to its interactions with the endocannabinoid system (ECS). The ECS is a physiological system that comprises cell receptors called cannabinoid receptors and chemicals called endocannabinoids. 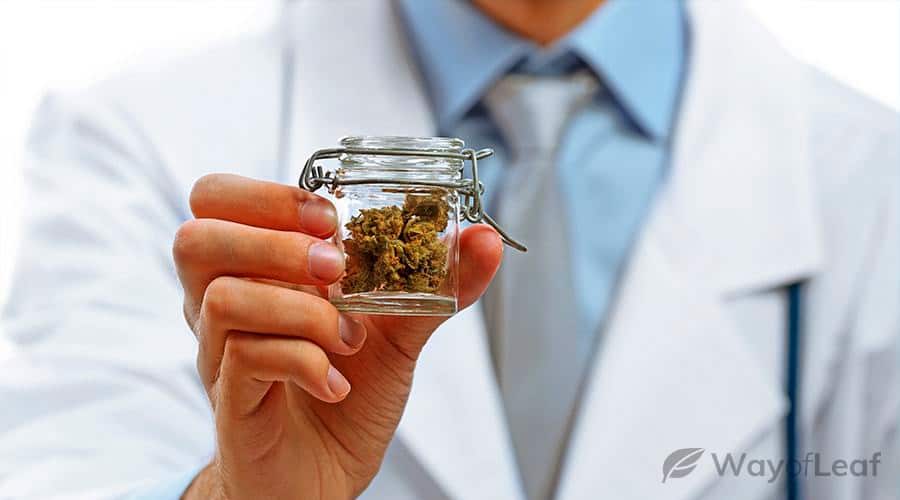 These cannabinoid receptors and endocannabinoids bind together to trigger a range of responses throughout the body. They are involved in mood, appetite regulation, pain, movement, and immunity, among other effects. Therefore, the ECS may be responsible for regulating some of our most essential functions.

Coincidentally, the cannabinoids that the cannabis plant produces, like THC and CBD, can also interact with this system. This is why cannabis users experience a range of physical and psychological effects. But how does this apply to Grave’s disease?

Most people know THC is the cannabis compound that causes users to become high. It does this by binding to CB1 receptors in the brain. But when THC binds with CB1 receptors elsewhere in the body, it produces very different effects.

The study above provided exciting insights into how the ECS affects thyroid hormone release. However, there are two critical factors to note.

Firstly, the study was conducted on rats rather than humans. Although both rats and humans have a similar ECS, there is no way of knowing how these results would transfer to human subjects.

Fortunately, there is also research available on how marijuana use affects thyroid function in humans. A 2017 study for the journal Thyroid assessed data from the National Health and Nutrition Examination Survey from 2007–2012. It included information from 5280 adults who answered questions about cannabis use and provided laboratory results for thyroid parameters.

The researchers classified their subjects as recent marijuana users (within the past 30 days), past users (more than 30 days ago), and non-users. The study’s results showed that recent users had a reduced frequency of increased TSH levels.

The recent users also had a reduced frequency of raised positive anti-thyroid peroxidase antibody (TPOAb). This is an antibody which people with autoimmune thyroid conditions tend to have in abundance.

Although these results do not shed much light specifically on cannabis for Grave’s disease, they are interesting, nonetheless. They suggest that regular marijuana use has a regulatory effect on the thyroid, its hormones, and associated antibodies.

THC or CBD for Grave’s Disease?

As well as potentially helping to control thyroid hormone release, THC may also alleviate some of the symptoms of Grave’s disease. It could help to stimulate the appetite to encourage weight gain and benefit those who find it difficult to relax or fall asleep.

However, another cannabis compound, CBD, may also be useful for Grave’s disease. Unlike THC, CBD has no intoxicating effects. It does, however, induce a state of calm and may be beneficial for problems such as anxiety and depression.

Because of the lack of intoxicating effects, CBD may be useful as a daytime option as it does not cause excessive drowsiness. CBD also has the advantage of being widely available in the majority of states, even those without a medical marijuana program in place.

CBD may be a promising option for many different autoimmune conditions.

Finally, research has shown that CBD has anti-inflammatory and immunosuppressive properties. This makes it promising in the management of many different autoimmune conditions, including type 1 diabetes, rheumatoid arthritis, lupus, myasthenia gravis, and Grave’s disease.

So, it appears that both THC and CBD may benefit Grave’s disease, albeit in very different ways. Individuals living with this condition should consult a physician to determine which cannabis therapy is most suitable for them.

It appears that cannabis may help Grave’s disease in a variety of different ways. Firstly, through THC’s interaction with the endocannabinoid system and the regulation of thyroid hormone release.

Secondly, cannabis could help Grave’s disease by alleviating some of its symptoms like weight loss and insomnia.