When thinking about why people use medical marijuana, Dupuytren’s contracture probably isn’t high on the list. However, recent research suggests that cannabinoids may have some hidden benefits for this relatively common condition.

Here’s all you need to know about cannabis for Dupuytren’s contracture and how to use it effectively.

What Is Dupuytren’s Contracture?

Sometimes known as Dupuytren’s disease, the condition affects approximately 5% of Americans. It is a connective tissue disorder that makes it impossible to straighten the fingers.

Therefore, Dupuytren’s contracture can have a significant impact on patients’ quality of life, making everyday tasks more challenging than usual.

It tends to affect the ring finger most often but can involve multiple fingers on one or both hands. The condition is more likely to affect the right hand than the left. However, 80% of patients experience Dupuytren’s symptoms in both hands.

The condition is often more severe when it occurs in men.

The first symptoms of Dupuytren’s contracture are usually small lumps or ridges on the palms. The disease then progresses slowly over several months or years. Eventually, the patient may lose the ability to straighten their fingers and perform everyday activities.

In addition to making basic tasks like preparing food difficult, Dupuytren’s contracture can cause several other unpleasant symptoms. Approximately 25% of people with the condition will also experience:

People with Dupuytren’s contracture are also at high risk of developing other connective tissue disorders, such as Peyronie’s disease.

Dupuytren’s disease appears to be genetic, meaning it is more likely to affect people with a family history of the condition. Other risk factors include:

Scientists are still trying to understand precisely how Dupuytren’s contracture develops. As well as genetics, it seems that oxidative stress may play a role.

Sometimes, people with Dupuytren’s contracture develop bands of diseased connective tissue under the skin of the hands. These are known as cords, and they pull the fingers into a bent position, preventing them from straightening.

In the past, the only effective Dupuytren’s treatment was surgery, which is still a popular option. However, the chances of the disease recurring following surgery are relatively high.

More recently, the FDA approved an injection called Xiaflex for Dupuytren’s patients with collagen cords. The injection contains enzymes that disrupt collagen production, allowing doctors to straighten the finger manually. Unfortunately, as with surgery, the chances of Dupuytren’s symptoms recurring is high.

With treatment options being so limited, some patients are wondering whether natural therapies like cannabis can help Dupuytren’s contracture. And although it cannot cure the condition itself, it may help to relieve some of its symptoms.

For example, many people with Dupuytren’s disease suffer from inflammation and discomfort in their hands. These are both problems that cannabis could relieve. 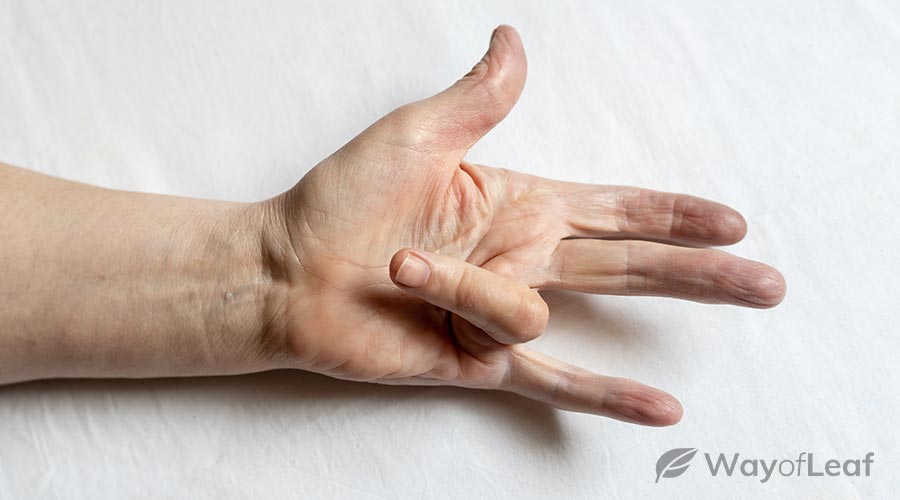 Cannabinoids like THC and CBD are well-known for their anti-inflammatory properties. They work by influencing the body’s in-built endocannabinoid system (ECS).

The ECS is present in the majority of human tissues, including cells in the immune system. When cannabinoids bind with these cells, they inhibit the immune response to dampen inflammation. They can also interact with cells in the central nervous system to relieve symptoms like pain.

Cannabis and its constituents also possess powerful antioxidant properties. This means that the plant could help to combat oxidative stress, a possible factor in the development of Dupuytren’s disease.

Furthermore, the potential benefits of cannabis for Dupuytren’s contracture don’t end there. New research has revealed some intriguing properties of cannabinoids that could offer further hope to patients with the condition.

Research on Cannabis and Dupuytren’s Contracture

While there is no existing research specifically on cannabis and Dupuytren’s contracture, recent studies suggest it may provide some benefits.

A 2012 study for the Annals of Rheumatic Diseases investigated the effects of a chemical called ajulemic acid. It is a synthetic molecule with a similar shape to THC, although it does not possess psychoactive properties.

One of the most promising findings about ajulemic acid is that it can bind to cell receptors known as PPAR-gamma. One function of these receptors is to regulate collagen production, and experiments have shown that ajulemic acid interrupts the process.

Further research published in the British Journal of Pharmacology in 2016 suggests that plant cannabinoids can also bind with PPAR-gamma receptors. They include:

It is important to understand that there is currently no scientific proof that cannabis helps Dupuytren’s contracture. However, if cannabinoids can reduce collagen production, they may be of some use. We hope to see more research to support this theory emerging soon.

How to Use Cannabis for Dupuytren’s Contracture

Although there is no conclusive evidence that cannabis can help Dupuytren’s disease, some patients may be keen to give it a try. Therefore, it is crucial to understand how to use it appropriately.

The most typical way of consuming marijuana is by smoking. However, smoking is one of the major risk factors for Dupuytren’s contracture. Therefore, alternative consumption methods may be more suitable.

For example, it is possible to take cannabis orally via edibles, tinctures, or capsules. However, these methods involve cannabinoids passing through the digestive system, reducing their absorption.

Another option is to choose topical products and apply them directly to the skin. Doing this bypasses the digestive system and ensures the cannabinoids get to where they are needed most. This method is popular among people suffering from painful conditions like arthritis.

The final key factor to consider is legality. Although 33 states and D.C. now allow cannabis for medical use, Dupuytren’s is not typically a qualifying condition. Patients in states with recreational laws should have no problem buying marijuana for Dupuytren’s contracture. However, others may not be so lucky.

One potential solution for people in areas where cannabis is illegal is to purchase hemp-derived CBD oil. These products are legal in most states, providing they contain less than 0.3% THC. The issue here is that the market is unregulated, and many brands are unreliable.

When selecting a CBD product, be sure to read plenty of customer reviews before making your decision. We also recommend only buying from companies that publish third-party lab reports on their websites. They enable you to see the complete cannabinoid content of each item and check that it is free from contaminants.

Learn more about how to choose the right product in our related article, CBD Therapy: Which Is Best for You.

Dupuytren’s contracture is a common problem with few reliable treatment options. This has led some people to wonder whether cannabis can help.

While there is no substantial evidence that medical marijuana can relieve Dupuytren’s contracture, it may provide some benefits. These include relieving inflammation and pain associated with the condition.

Additionally, new studies suggest that cannabinoids may reduce excess collagen production, a key feature of Dupuytren’s contracture. However, whether these findings translate into clinical practice remains to be seen.

We recommend consulting a knowledgeable physician before using cannabis for Dupuytren’s contracture or any other chronic condition. They will assess the potential benefits and risks to determine whether it is worth a try.

10
8 min read
Join the discussion
TOC
Premium
Your subscription has ended
If you love cannabis and want to support our site, join WayofLeaf Premium today and unlock
Best of all, part of your membership fee will go towards supporting the fight to legalize cannabis.
Sign Up for WoL Premium
Not now
I already have an account
×
Log in to Your Premium Account