Tourette syndrome, also known as Tourette’s, frequently appears on lists of medical marijuana qualifying conditions. It is a neurological disorder which is characterized by involuntary tics. These tics include repetitive movements or vocalizations and can range from mild to extremely severe.

Experts have speculated that cannabis could help to relieve the symptoms of Tourette syndrome by altering activity in the brain. This theory is backed up by numerous case studies and small-scale clinical trials. However, research on marijuana and Tourette’s is still very much in its infancy, leaving scientists with many unanswered questions.

So, can cannabis help Tourette’s syndrome? Let’s take a look.

What Is Tourette’s Syndrome?

A French neurologist, named Dr. Georges Gilles de la Tourette, first identified this condition in 1885. It is a neurological disorder that usually appears in children between the ages of 3 and 9 years. It tends to reach its peak in early adolescence and gradually eases by early adulthood. Males are 3–4 times more likely to develop Tourette Syndrome than females. It is unclear exactly why.

The National Institutes of Health estimates that 200,000 Americans suffer from the most severe form of Tourette’s. However, as many as 1 in 100 may experience milder symptoms.

The symptoms of Tourette syndrome can be broken down into simple and complex tics. These tics may include involuntary, repetitive movements or vocalizations.

Simple motor tics include movements of a single muscle group, for example:

In its most extreme form, Tourette syndrome can cause self-injurious behavior, such as the patient punching themselves. They may also repeat socially inappropriate phrases or swear words.

People with Tourette syndrome may also experience other neurological or behavioral issues at the same time. These include ADHD, obsessive-compulsive actions, depression, and anxiety.

Symptoms tend to worsen during periods of extreme excitement or stress. They may improve during calming or focused activities. Some Tourette’s patients can control their tics to a certain extent. However, they may eventually build up so much tension that they have no choice but to express them.

Scientists are still unsure of what causes Tourette syndrome. It appears to involve abnormalities in certain brain regions, including:

As well as affecting these areas of the brain, Tourette syndrome may influence the way they communicate with one another. This includes the release of neurotransmitters such as dopamine, serotonin, and norepinephrine.

There is currently no specific treatment for Tourette syndrome. Doctors manage severe symptoms by prescribing neuroleptic (antipsychotic) medications. These include haloperidol and pimozide.

Some common side effects include:

Due to these unpleasant effects, many patients with Tourette syndrome have sought natural alternatives. These alternatives include medical cannabis.

There are many reports of cannabis helping patients with Tourette syndrome. However, scientists are still trying to determine precisely how it works.

To date, we know about two main types of cannabinoid receptor, CB1 and CB2. It is CB1 receptors which are likely to be involved in Tourette syndrome. 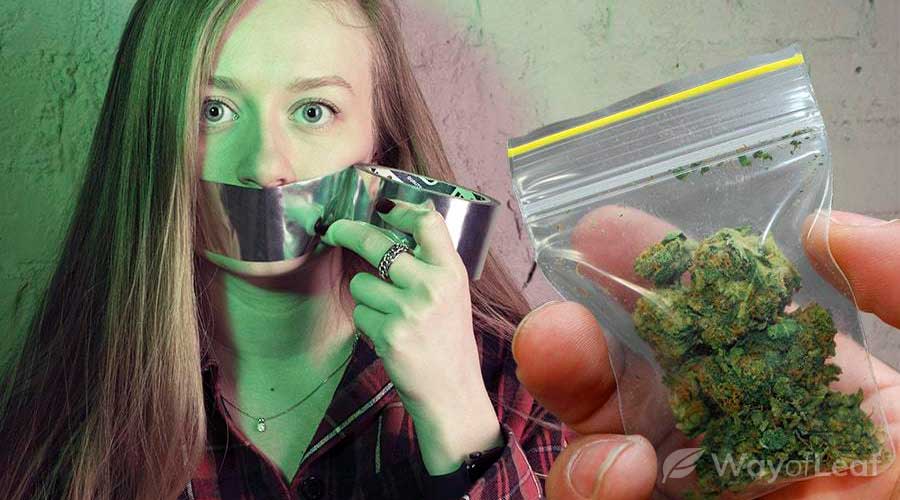 These receptors exist in high concentrations in the basal ganglia and cerebellum, both of which play a role in motor function. They are also prevalent in the hippocampus, which is involved in emotion, memory, and learning.

When endocannabinoid compounds bind with CB1 receptors, they influence the release of neurotransmitters. These include dopamine, serotonin, and norepinephrine. They also affect glutamate and GABA, which are the primary excitatory and inhibitory neurotransmitters.

The cannabinoids that the cannabis plant produces, such as THC, have a similar shape to these endocannabinoids. Therefore, they can also bind with CB1 receptors and have similar actions. It seems likely that this is how cannabis could help Tourette syndrome. It has the potential to interact with the body’s natural ECS and enhance its beneficial effects.

Research on Cannabis for Tourette Syndrome

One of the most in-depth pieces of research on marijuana and Tourette’s was published in Behavioural Neurology in 2013. It reviews several case reports, retrospective studies, and two clinical trials.

The two clinical trials included 12 and 24 patients, respectively. Both studies compared THC in varying doses with placebo. They found significantly better results after treatment with THC vs. placebo.

A 2017 study for The Journal of Neuropsychiatry and Clinical Neuroscience had similar findings. The trial included 19 patients with Tourette’s syndrome. Their tics were reduced by 60% after treatment with cannabis. Furthermore, the authors classified 18 of the 19 participants as at least ‘much improved.’

Another study for the International Journal of Molecular Sciences in 2017 assessed cannabinoids for vocal blocking tics. Two patients had speech impairments similar to stuttering due to Tourette syndrome. One vaped medical cannabis, while the other used dronabinol, a synthetic form of THC. Both patients experienced overall improvements in symptoms.

Finally, a 2017 case report featured in Brain Sciences looked at a patient with treatment-resistant Tourette syndrome. The 22-year old male suffered severe and complex symptoms as a result of his condition. He took nabiximols, another synthetic cannabinoid, and experienced improvements after just two weeks.

Since no large-scale studies exist to date, it is impossible to draw firm conclusions regarding marijuana and Tourette syndrome. However, the current research is promising and suggests that cannabis could help, especially if other treatments have failed.

One of the downsides of using cannabis to treat Tourette syndrome is that it contains THC. The problem with this is that scientists believe THC can negatively impact the developing brains of younger people. Since most patients develop Tourette syndrome in childhood, this is obviously a significant issue.

This has led many patients and their families to wonder whether CBD could help. Like THC, CBD is a chemical that the cannabis plant produces. However, unlike THC, it lacks intoxicating effects. Therefore, many parents use it to treat childhood conditions like epilepsy, and it appears to be safe.

There is currently no evidence that CBD alone is effective for treating Tourette syndrome. However, a clinical trial is underway to test cannabis with varying THC:CBD ratios and their effects on the condition.

The trial will look at three different varieties of cannabis. One is high in THC and low in CBD, while another is rich in CBD but low in THC. The third strain contains an equal amount of the two cannabinoids.

The results should be available later this year and will shed further light on whether CBD can help Tourette’s syndrome. If the findings are positive, they could open up a new avenue for people with Tourette’s. This could help not only young patients, but also those who wish to benefit from cannabis but cannot tolerate THC.

Anecdotal evidence indicates that cannabis could help to relieve many of the symptoms of Tourette syndrome. However, there are not enough large-scale clinical trials to confirm exactly how or why it might work. Therefore, some patients may find marijuana for Tourette’s helpful, although others may not.

As with any medical condition, you must consult your physician if you wish to try cannabis for Tourette syndrome. Medical supervision is even more important if you are seeking treatment for a child or a teenager.

THC could cause mental health issues if used while the brain is still developing. Thus, medical marijuana may not be the most appropriate treatment for minors suffering from Tourette’s.

However, if you are an adult and have found regular Tourette syndrome treatments ineffective, cannabis could be worth a try.