Medically reviewed by Dr. Sibin Stephen
Written by Natalie Saunders, B.A., LicAc
4 min read
0 comments
Read Later
All information on this website is for general informational purposes only and is not intended or implied to be a substitute for professional medical advice, diagnosis or treatment.

Myasthenia gravis (MG) is a chronic disease that causes severe weakness of the muscles. New research suggests that cannabis may help, but few medical marijuana programs list MG as a qualifying condition. In fact, only Illinois currently allows registered patients to use cannabis for myasthenia gravis.

In this article, we explore how cannabis could help MG and why more states need to follow Illinois’ example.

What Is Myasthenia Gravis?

Myasthenia gravis causes weakness in the skeletal muscles. These include the muscles of the face, arms, legs, and chest. It produces a variety of symptoms, including:

Approximately 15–20% of people with MG may suffer from something known as a ‘myasthenic crisis.’ This is a medical emergency in which the patient becomes unable to breathe due to muscle weakness in the chest.

Myasthenia gravis is an autoimmune disorder, meaning the immune system becomes confused and begins to attack the body’s healthy tissues. In the case of MG, the immune system attacks the space between the nerve cells and the muscles. This area is known as the neuromuscular junction (NMJ).

In healthy people, the NMJ is where nerve cells stimulate the muscles to contract. They do this by releasing a neurotransmitter called acetylcholine. Acetylcholine travels across the NMJ and binds with receptors on the muscles.

However, in people with myasthenia gravis, the immune system attacks these receptors, resulting in acetylcholine’s inability to bind effectively. This means that the muscles are unable to contract normally, leading to the symptoms of MG.

Scientists are still unsure exactly why some people develop myasthenia gravis; however, one hypothesis is that MG develops due to a dysfunction of the thymus gland, which produces immune cells known as T-cells.

Fortunately, it is now possible to control MG using medication or surgery. For some people, removing the thymus gland may result in significant benefits, while others may need pharmacologic therapies.

At this time, no cure exists for MG, with the goal of treatment being the management of symptoms and controlling the activity of the immune system. 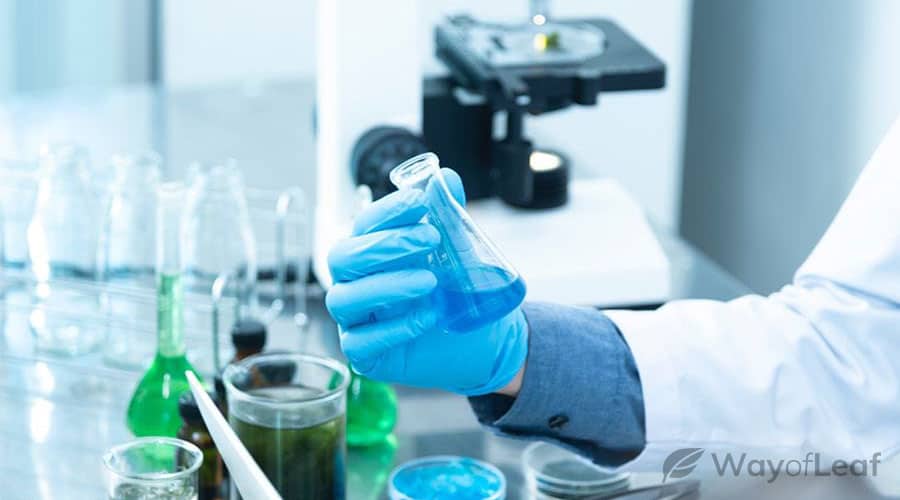 One of the most common treatments for MG is a class of drugs known as anticholinesterase medications. They work by slowing the breakdown of acetylcholine in the NMJ to improve muscle function. Side effects include gastrointestinal upsets, excessive tearing, and saliva overproduction.

Another way to control the condition is to use immunosuppressants which minimize the abnormal immune response that occurs in MG. The main downside is that they suppress the whole immune system, making patients more vulnerable to infections.

So, how about cannabis? Could it offer a potential treatment for symptoms associated with myasthenia gravis?

Humans have used cannabis as a medicine for thousands of years. However, it became illegal during the 20th century and is just beginning to regain its reputation as a healing herb. Proponents claim that cannabis can help with a wide range of physical and psychological complaints. One of these is myasthenia gravis.

It appears that cannabis could help myasthenia gravis by regulating activity in the nervous system. It does this by producing compounds known as cannabinoids, including THC and CBD. Both THC and CBD have beneficial properties. They influence a physiological system known as the endocannabinoid system (ECS) to produce various effects on the body and mind.

However, THC and CBD both affect the ECS in very different ways. THC primarily binds with receptors called CB1 receptors, which are prominent in the brain and nervous system. CBD, on the other hand, exerts most of its effects on CB2 receptors, which are highly concentrated in immune cells.

Over the last few decades, int…

Studies have shown that when THC binds with CB1 receptors, it modulates the release of several different neurotransmitters. The long list of neurotransmitters that THC affects includes acetylcholine, the chemical involved in myasthenia gravis. For example, this study for the journal Alcohol and Drug Research found that THC increased acetylcholine levels in several areas of the brain.

Another study for the European Journal of Pharmacology explored this phenomenon further. Its authors suggested that THC exerts its effects not only at cannabinoid receptors but other sites in the nervous system too.

More research is required to understand precisely how cannabis could impact acetylcholine levels and myasthenia gravis. However, many scientists are now becoming interested in this relationship, leading to the publication of further studies.

Research on Cannabis for Myasthenia Gravis

One study appeared in the journal Scientific Reports in 2018, where authors investigated the effects of a cannabinoid receptor agonist called WIN 55,212 on a mouse model of myasthenia gravis. They found that treatment with the compound led to restored neuromuscular transmission. The authors suggest that the mechanism behind this is an increase in acetylcholine levels in nerve cells.

Research suggests that cannabinoids could offer a promising treatment for myasthenia gravis in the future.

The results of this study suggest that cannabinoids could offer a promising treatment for myasthenia gravis in the future. However, it is essential to note that this study utilized a synthetic cannabinoid agonist rather than natural cannabis; also, this was a preclinical mouse model in a laboratory setting. Further research is needed to understand the effects on humans.

Although most states with medical marijuana programs have not yet caught on, it seems that cannabis could offer some benefit for patients with myasthenia gravis.

Although research is still ongoing regarding marijuana’s effect on the underlying pathophysiology of MG, patients have reported relief and improvement in quality of life when treating the condition with cannabis. The active components within medical marijuana have demonstrated the ability to reduce stress and anxiety often associated with MG, as well as treating the chronic pain associated.

Residents of Illinois can apply for an MMJ card if they suffer from this debilitating condition. However, those living in other states will either have to rely on recreational cannabis laws or consider using CBD instead.

For readers considering using cannabis or CBD oil to address myasthenia gravis, please consult a physician first. While these natural remedies may act as a helpful adjunctive treatment, they are not a substitute for proper medical care. Never stop taking any prescribed medication without first getting consent from a physician.

Also, please note that cannabis and CBD could interact with other medications that a patient may be taking. A physician or pharmacist will be able to advise whether these products are safe and will also recommend the correct dose to consume.

Related article
5 Cannabis Strains That Are Perfect for Muscular Dystrophy

Strains that can help with the…