We all suffer now and then from sleepless nights, but there are those that suffer from different sleep disorders that constantly prevent them from having a good night’s sleep. One of those disorders is called sleep apnea.

Unlike Insomnia, which is defined as the inability to sleep, sleep apnea is a medical disorder in which a person will have one or more pauses in his/her breathing or shallow breaths while asleep.

What Is Sleep Apnea?

In general, there are three types of apnea:

Breathing pauses can last from a few seconds to minutes. They may occur 30 times or more an hour. After the pause, normal breathing will resume with a snort or choking sound.

Did you know that Sleep Apnea tends to affect men over the age of 40, but it can hit people of all ages?

Furthermore, those that suffer from sleep apnea have also been known to have the following risk factors:

It is important to treat apnea as it can cause serious sleep disorders that can lead to significant heart problems. According to a recent article by Sleep & Breathing, quoted on the HuffingtonPost, people with untreated, severe OSA are more than two times more likely to die from heart disease.

Fortunately, nowadays, there are different treatments that can help alleviate sleep apnea.

One of the most commonly prescribed treatments for sleep apnea is CPAP (continuous positive airway pressure). CPAP is a mask that fits over the nose and/or mouth and gently blows air into your airway allowing you to breathe at a more steady rate.

Most primary care doctors will recommend this form of treatment as it doesn’t involve intrusive medical procedures or medications.

Over the last couple of years, cannabis has gained traction in the medical arena, and it is now being suggested that specific strains could help combat sleep apnea.

In 2002, researchers at the University of Illinois published findings showing that THC and oleamide were effective in stabilizing respiration in mice during their entire cycle of sleep. What was interesting, was the fact that THC managed to reduce the apnea index during NREM and REM sleep stages, by 42% and 58%, respectively.

THC managed to reduce the apnea index during NREM and REM sleep stages, by 42% and 58%, respectively.

Another breakthrough appeared in 2013 when Dr. David Carley showed that THC dronabinol is safe, well-tolerated, and reduces the apnea-hypopnea index (AHI) by approximately a third over 3 weeks of oral therapy in selected patients with OSA.

Thanks to the evolution of the marijuana industry there are now quite a few different cannabis strains on the market that can help with sleeping disorders or sleep apnea.

Just remember; it is extremely important to consult with a marijuana doctor about your specific condition before you consider medical marijuana as a treatment.

This marijuana strain will appear on every list, and it can help a variety of medical problems, not just sleep disorders. OG Kush is a hybrid cannabis strain containing 90% percent indica and 10% sativa. It’s the perfect “chill down” pill and is known to help its patients unwind. Furthermore, you can find this strain in virtually every dispensary.

The next cannabis strain on our list is Blackberry Kush. Similar to OG Kush, this is a hybrid marijuana strain that leans towards Indica. The cannabis strain is incredibly potent, and its 20% THC content offers its patients an amazing dose of high. 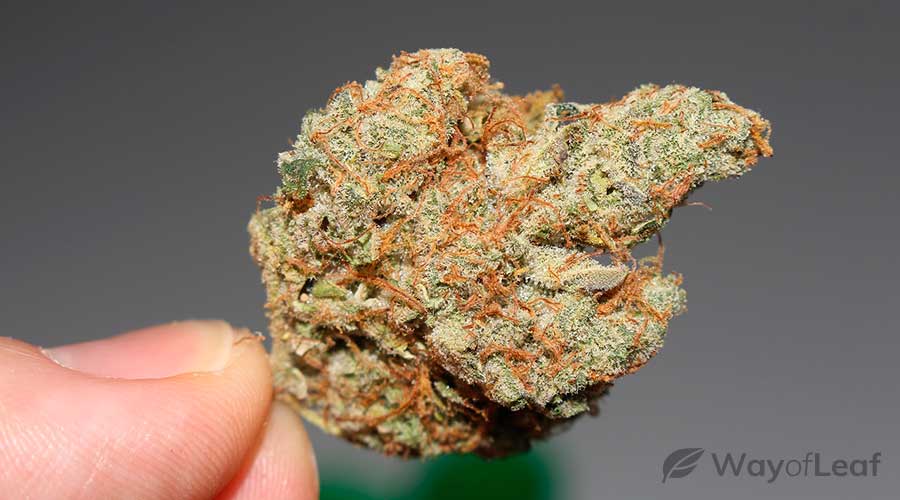 It is known that if you smoke too much of this marijuana strain, you’re going to fall asleep in no time. The buds on this cannabis strain are dense, covered with trichomes and red hairs. It has a fruity sweet taste like grape or berry with a smooth feel that is less likely to lead to coughing.

This is really an old-school marijuana strain and has been around since…well, who knows! It is an inbred descendant of the original Afghani landrace cannabis strain and is rich with goodness. 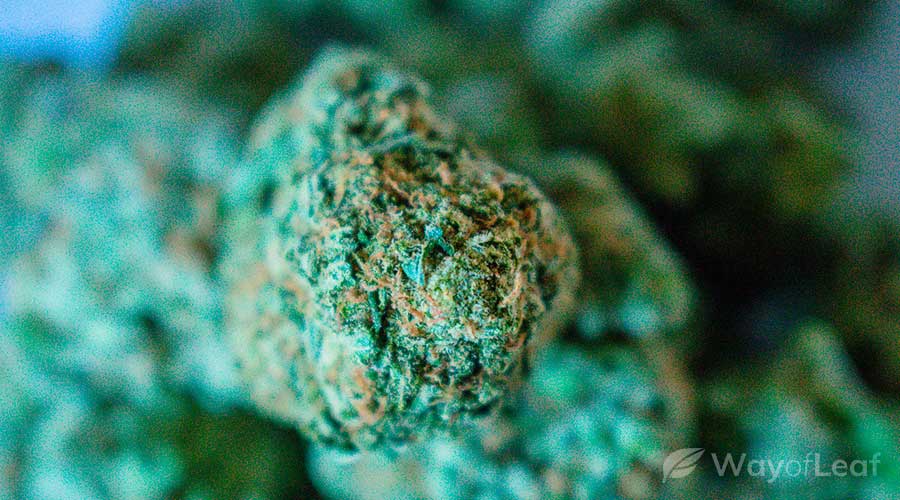 THC levels can reach 19%, and its impact is almost immediately felt, giving the patient a powerful body effect together with an amazing euphoric and relaxing high. Northern Lights is known to be an effective cannabis strain for insomnia, chronic pain, and anxiety. It is also known to be used by those that suffer from sleep apnea. If you live on the west coast, you will find this popular cannabis strain in every dispensary.

As the name says, Grape Ape tastes like deep purple sweet grapes. It is a crossbreed of Mendocino Purps, Skunk, and original Afghani, making it more indica than sativa (90%/10%). 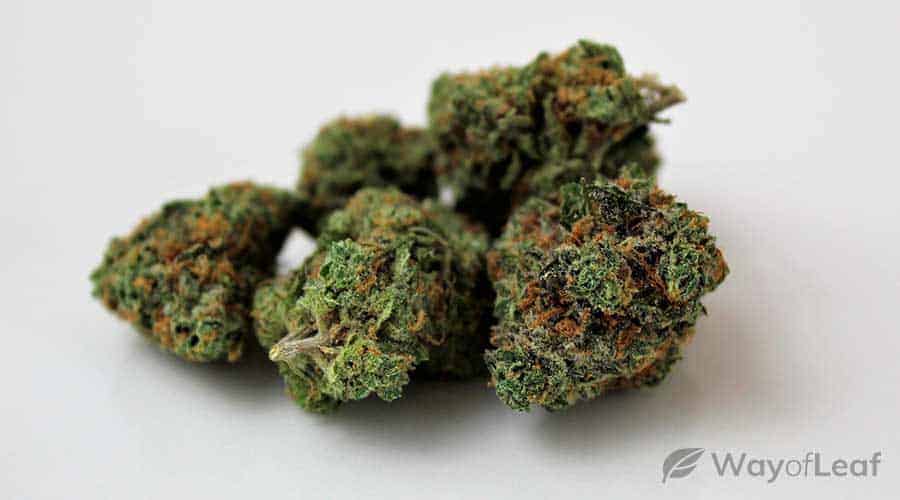 This cannabis strain has pure goodness and treats a plethora of medical conditions including chronic pain, migraines, and arthritis. It provides a relaxing experience and is known to lead to a night of deep sleep. This is classed as a powerful night-time strain and therefore is on our list as one of the strains that help sleep apnea.

Known for having an earthy and spicy feel, this strain is a mix of THC and CBD goodness (25%, 1%), that will definitely calm your body down sending you off for a good night’s sleep. 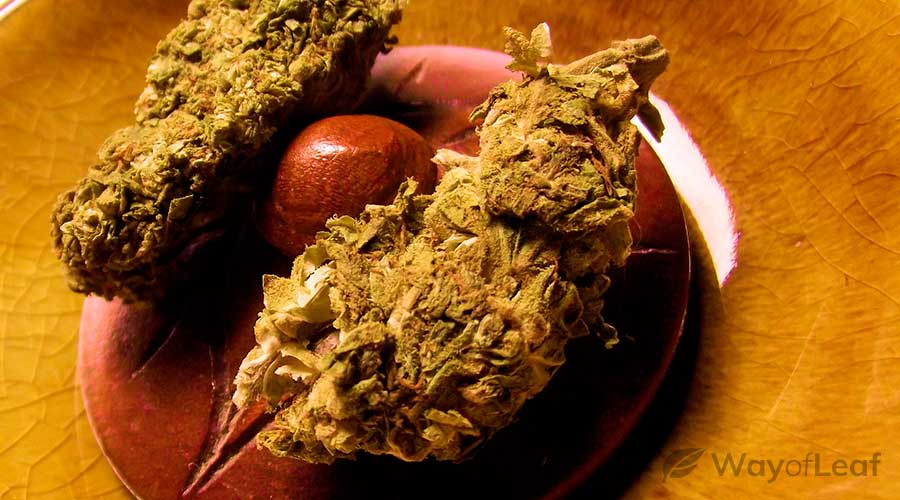 Due to its potent effects, Critical Kush is perfect for combating stress, chronic pain, depression, and injuries which are all associated with sleep apnea.

Sleep apnea isn’t a condition that should be left untreated. Apart from leading to different health issues, it is also responsible for lowering your performance in day to day capabilities and can seriously impact your lifestyle as well as your health.

We hope that these 5 cannabis strains for sleep apnea provide you with some relief. If you have any other recommendations, be sure to share them with us on our Facebook Page or in the comments below.

6
3 min read
Join the discussion
TOC
Premium
Your subscription has ended
If you love cannabis and want to support our site, join WayofLeaf Premium today and unlock
Best of all, part of your membership fee will go towards supporting the fight to legalize cannabis.
Sign Up for WoL Premium
No thanks, I can't afford it
I already have an account
×
Login in to your premium account