Medically reviewed by Lynn Marie Morski, MD, Esq.
Written by Dylan Baker, B.S.
5 min read
11 comments
Read Later
All information on this website is for general informational purposes only and is not intended or implied to be a substitute for professional medical advice, diagnosis or treatment.

Irritable Bowel Syndrome, or IBS, is one of the most common gastrointestinal conditions in the world. The condition can flare up at random, and symptoms can include:

IBS can become chronic, and there are few effective treatment options.

The current conventional medical treatments for IBS include opioids, anticholinergics (drugs that block the actions of the neurotransmitter acetylcholine), and antidepressants. For many sufferers of IBS, these traditional treatments produce suboptimal results. As a result, some have turned to cannabis to try and alleviate the symptoms of the condition.

Cannabis for IBS: What Does the Research Say?

In one publication, Brugnatelli et al. suggest that agents capable of modulating the endocannabinoid system (ECS) may provide a strategy worth attempting in the first-line of treatment of patients with IBS.  One of the agents that the researchers refer to is CBD, which exhibits a beneficial safety profile and has shown some benefit in improving IBS symptoms.

Brugnatelli et al., also mention THC and its synthetic analogs, and say that they may be recommended for IBS patients to improve symptoms such as abdominal spasms, cramps, and visceral pain.

The researchers acknowledge that there is still a wide gap in the current understanding of the IBS mechanism and how useful phytocannabinoids like THC and CBD are as a potential therapy for IBS. They conclude by saying that the only way to bridge the gap is by carrying out more randomized controlled trials.

Researchers acknowledge that there is still a wide gap in the current understanding of the IBS mechanism and how useful phytocannabinoids like THC and CBD are.

In their article, Cannabis in Gastrointestinal Disorders, Bashashati and McCallum reviewed the clinical evidence regarding the use of medical cannabis as a treatment for gastrointestinal (GI) diseases. Drawing on research carried out by Izzo and Sharkey, the authors state that cannabinoids can affect both GI motility and visceral sensation. Therefore, they say that cannabinoids are potential candidates for IBS treatment, especially when the condition presents with diarrhea.

However, Bashashati and McCallum acknowledge that studies on the effect of smoked cannabis in IBS are lacking. They also say that the effects of THC on GI motility in IBS are variable, and its impact on abdominal pain and visceral sensation is “not promising.” The authors conclude by saying that further investigations are needed to determine whether manipulating the ECS is effective for IBS.

What Are the Best Cannabis Strains for IBS?

It is clear from the literature that more research is needed to better understand whether cannabis or any other agent capable of manipulating the ECS is useful as a potential therapy for IBS. Dronabinol, a synthetic form of THC, has been touted as a possible option for alleviating IBS symptoms. However, studies have shown that it is only helpful for certain aspects of IBS, like decreasing colonic contraction.

A considerable amount of anecdotal evidence suggests that certain strains have provided medicinal cannabis consumers with some temporary relief from their IBS symptoms. Based on reviews, the strains that may work best at alleviating IBS symptoms are ones with a CBD content that is at least equal to or higher than its THC level.

It is important to note that none of these strains have been proven to be an effective treatment for IBS in any clinical study. They were merely chosen based on their CBD: THC ratio and on anecdotal evidence drawn from the reviews of specific strains.

When trying to identify strains that may be effective for alleviating IBS symptoms, some stood out as being reportedly better than others based on reviews. One of these strains was Cannatonic. 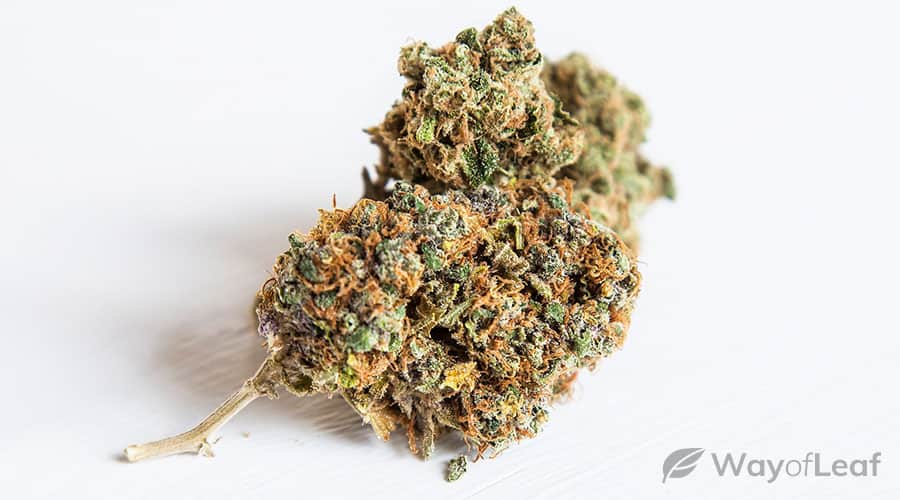 This hybrid’s THC content generally ranges between 3-6% while its CBD content can be two to three times higher, at 6-17%. Due to this low THC level, medical consumers are unlikely to experience anything more than mild intoxicating effects.

This sativa-dominant strain is a cross between Colombian Gold and Thai and Swiss landraces and boasts an unusual THC to CBD ratio. With THC levels ranging between 7-10% and CBD around 8.5-15%, this is a great choice for those suffering from IBS looking for a high-CBD strain. 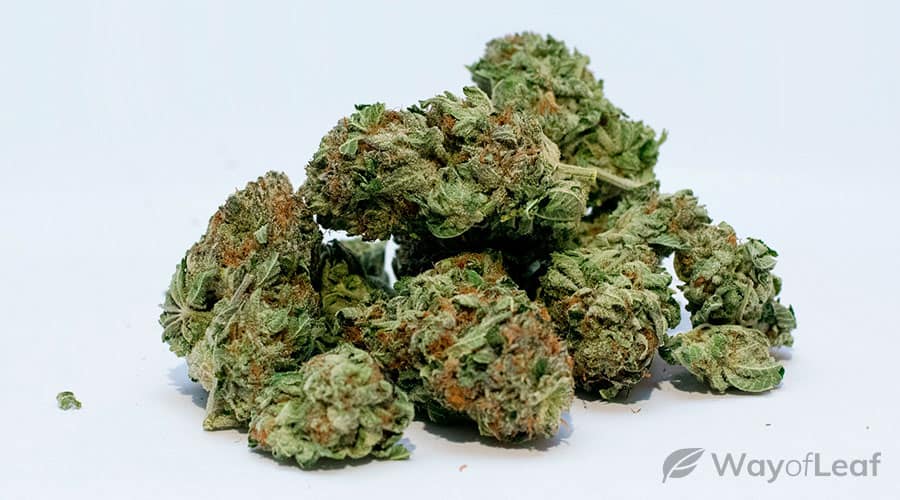 Harlequin is known for its super calming qualities without leaving you couch-locked. It brings about a feeling of focus, which makes it great for daytime use and is the main reason so many patients opt for it.

Please note that the One to One strain contains a slightly higher THC content than the previous couple of strains on this list. Therefore, consumers of this strain are likely to experience some intoxicating effects. However, most say that these effects are relatively mild and that the high is more uplifting than overwhelming.

Stephen King fans may recognize this strain’s name, as it is named after the evil clown from his novel, It. Unlike the terrifying clown, the Pennywise strain won’t instill a feeling of terror or panic in its consumers.

It is essential to note that there are four different phenotypes of the Pennywise strain. Therefore, consumers should do their research to determine the exact THC and CBD content of the Pennywise phenotype they have selected before consuming it.

The Pennywise phenotype that may be of interest to IBS patients is the one that contains an equal amount of THC and CBD. On average, It typically contains 7.5% of both phytocannabinoids. However, depending on the phenotype, this can be considerably higher, and some Pennywise strains can contain up to 12-15% CBD and THC.

The final strain on this list is the Argyle strain. This indica-dominant (80:20) hybrid is a fusion of Afghani and Sensi Star genetics. Argyle is another 1:1 strain, and on average, it contains an equal amount of THC and CBD, i.e., 10% of each phytocannabinoid.

Many Argyle consumers describe its effects as mellow and calming. This strain is best suited to evening time use as it tends to have stronger sedative effects in its latter stages. Some say that it can cause couchlock and drowsiness, so consumers should bear this in mind when deciding whether to consume it.

Final Thoughts on the Best Strains for Irritable Bowel Syndrome

After examining the literature regarding the use of cannabis as a potential treatment option for IBS, it is clear that much more research is needed before any definitive conclusions can be made.

Researchers have suggested that agents capable of modulating the ECS (such as THC and CBD), may provide a strategy worth investigating as a first-line treatment of patients with IBS. However, more randomized control trials are needed to determine whether this is a viable treatment option.

And anecdotally, some medicinal cannabis consumers with IBS have suggested that certain strains temporarily alleviate some of the condition’s symptoms.

As previously mentioned, the strains we have listed above were chosen based purely on anecdotal evidence, i.e., from reviews of these strains. It is essential to be aware that none of these strains have been demonstrated to be effective for IBS in any clinical study.

Anyone considering consuming any of these strains listed here, or any other strain for IBS, should discuss this first with their medical professional before doing so.