In November 2017, the American College of Cardiology and the American Heart Association changed the national blood pressure guidelines. Both bodies agreed that Americans with blood pressure over 130/80 should be treated. This was a move down from the long-standing 140/90 figure.

This move drastically altered the number of Americans classified as having hypertension from 72 million to approximately 103 million. This figure equates to around 46% of all adults! Also known as hypertension, high blood pressure is one of the biggest causes of preventable heart disease and stroke deaths in the U.S.

Back in 2015, a government-sponsored study showed that death from a heart-related cause fell over 40%, and heart failure rates dropped 38% when a person’s systolic blood pressure was below 120 compared to those brought to a target below 140.

The links between hypertension and cardiovascular events are well-known, as is the strong relationship between cigarette smoking and heart problems. An interesting angle not yet adequately explored is the effect of cannabis on blood pressure. In this article, we check out high and low blood pressure and determine if there is any connection to the rise and fall of it when a person uses marijuana.

What Is High Blood Pressure?

Some health professionals refer to high blood pressure as a silent killer. This is because it often has no symptoms and is only discovered at times of a medical checkup. When symptoms do occur, it’s usually only when the high blood pressure has increased to life-threatening levels. People with hypertension shouldn’t ignore the condition as it can cause some serious health problems if it’s left untreated.

High blood pressure increases the individual’s risk of heart attack, cardiovascular disease, and stroke. Obesity, poor diet, tobacco use, physical inactivity, and alcohol use are all factors that can cause an increased possibility of developing high blood pressure.

What determines a person’s blood pressure is the level of resistance to blood flow in their arteries. The narrower or less compliant a person’s arteries are, the higher their blood pressure.

It is entirely possible to have hypertension for years without any symptoms. However, in the background, the blood vessels and heart continue to get damaged. This damage eventually could lead to a serious cardiac episode such as a stroke or heart attack. High blood pressure usually develops over a few years, but it’s easily uncovered if you have a regular physical examination.

There are two types of high blood pressure:

This type of blood pressure is sometimes referred to as essential hypertension. It occurs on its own and does not have any discernible cause.

An underlying condition or medication causes this type of high blood pressure. It may appear suddenly and, in some cases, causes even higher blood pressure than primary hypertension. Here are a few conditions and medications that can cause it:

There is a wide range of risk factors, including:

High blood pressure can lead to conditions such as heart failure, thickening blood vessels in the eye, aneurysm, stroke, heart attack, and trouble with memory.

How Is Blood Pressure Measured?

Your physician will put an inflatable arm cuff around the arm and use a pressure-measuring gauge to take your blood pressure. You will notice that the reading has two numbers and is given in millimeters of mercury (mm Hg). The first number measures the pressure in the arteries when your heart beats and is known as systolic pressure. The second number measures the pressure in the arteries between the heart’s beats and is called diastolic pressure.

Blood pressure is considered normal if the systolic pressure figure is below 120, and the diastolic number is below 80. A healthy reading would be 117/78 mm/Hg, for example. Here are a few other classifications based on blood pressure readings:

What About Low Blood Pressure?

Also known as hypotension, low blood pressure is when the systolic number is below 90, and the diastolic figure is below 60. You may think it is a desirable condition, but it is usually accompanied by symptoms such as fatigue, blurred vision, fainting, dizziness, and a loss of concentration.

In extreme cases, the symptoms become worse and include a weak and rapid pulse, rapid, shallow breathing, and cold, clammy, pale skin.

A sudden fall in blood pressure is potentially dangerous. For example, a drop in systolic pressure from 115 to 95 may cause dizziness and fainting because the brain doesn’t receive enough blood. Conditions and medications that can cause hypotension include:

Seniors are at greater risk of a sudden fall in blood pressure after a meal or when they stand. Diabetes, Parkinson’s disease, and certain heart conditions all increase the risk. 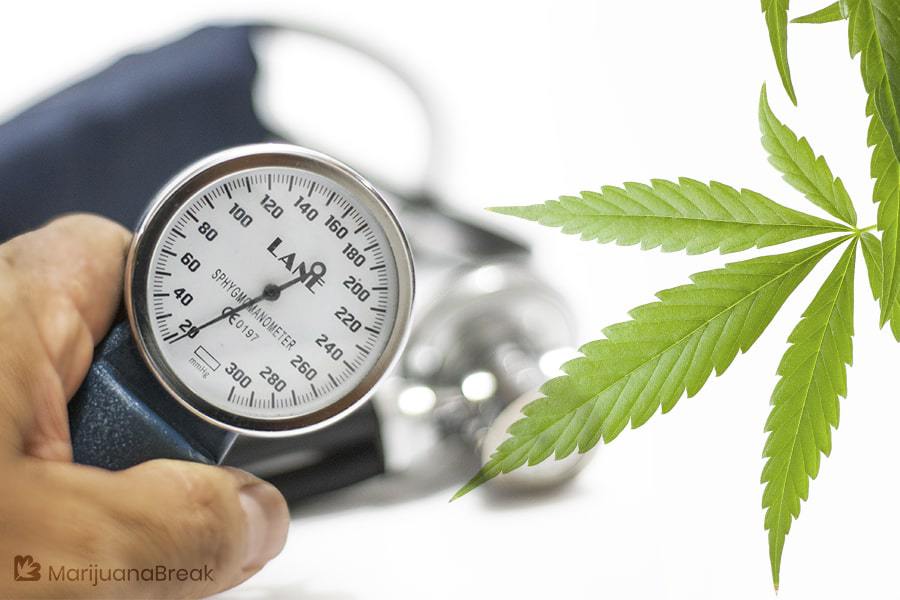 Some studies claim cannabis increases blood pressure, while others suggest it reduces it. Scientists believe that those with heart disease who are under stress can develop chest pain more rapidly if they smoke marijuana. This reaction may be due to the effects of cannabinoids on the cardiovascular system. Some of these effects include dilation of blood vessels, increasing resting heart rate, and causing the heart to pump faster.

Interestingly, for individuals in this situation, the risk of heart attack is several times higher in the first hour after using cannabis than normal. While this doesn’t prove that the plant is harmful to the heart of healthy individuals, it is a warning sign for anyone with a history of heart disease.

Back in 2017, the European Journal of Preventive Cardiology published a study by Yankey et al. It involved asking over 1,200 participants whether they used cannabis. According to the research, conducted in 2005-2006, cannabis users were 3.42 times more likely to die from hypertension, with the risk increasing by 4% with each year of use.

However, in 2019, the study was retracted with the agreement of the authors. The reason was a methodological error that resulted in ‘immortality bias’ within the study’s findings.

A study by Alshaarawy and Elbaz looked at marijuana use and blood pressure levels from 2005-2012. The research, published in the Journal of Hypertension in August 2016, involved analyzing 12,000 volunteers over seven years. Overall, those who used cannabis within the previous 30 days had a slightly higher systolic pressure reading than non-users.

There is research that suggests marijuana users experience a slight increase in blood pressure immediately after use only for their blood pressure to drop within minutes, a process that can leave them feeling groggy and sleepy.

After a few weeks of moderate to regular use, you may develop a ‘tolerance,’ which can have a significant effect on how weed impacts your blood pressure.

In February 2008, a study by Pacher, Batkai, and Kunos, was published in the Handbook of Experimental Pharmacology. It wrote that the endogenous cannabinoid system was implicated in the mechanism of hypotension in specific disease states. It also said that cannabinoids had been considered as potential antihypertensive agents. In other words, cannabinoids such as THC could be used to keep blood pressure levels under control.

Does Marijuana Increase the Risk of Heart Attack?

On the other hand, a 2006 study by Rodondi et al. published in The American Journal of Cardiology looked at over 3,600 volunteers to see if there was any link between cannabis and cardiovascular risk factors. They found no long-term causal link. However, it was associated with other unhealthy behaviors that could contribute to heart disease.

A study by Tompkins et al. presented at Heart Rhythm 2018 looked at one million patients to assess the arrhythmic effects of marijuana after a heart attack. It found that smoking cannabis did not increase the risk of ventricular tachycardia and ventricular fibrillation. Interestingly, the researchers also discovered that cannabis users had a lower risk of atrial fibrillation and in-hospital mortality.

People often assume that smoking cannabis causes high blood pressure because of the links between smoking tobacco cigarettes and hypertension. However, research into the effect of cannabis on blood pressure, albeit limited, shows that it may cause an initial spike in blood pressure, followed by a drop amongst some experienced users who have developed a tolerance.

If you have a tolerance for marijuana, you may not even experience the initial rise in blood pressure. The often-cited Yankey study, which was supposed to provide clear evidence that cannabis causes an increase in blood pressure, was recently retracted. There were flaws in the methodology and so the study is no longer available for public view.

Unfortunately, there isn’t enough research material available to draw a definitive conclusion. Certainly, high blood pressure is more likely to be caused by a bad diet and an unhealthy lifestyle than through the occasional use of marijuana.

Nonetheless, we don’t recommend using cannabis specifically to lower your heart rate or treat your blood pressure. Speak to your doctor before considering medical marijuana for any condition.