Several studies in recent years have attempted to observe the effects of cannabis vs. tobacco on lung health. One of the most recent of these studies, an April 2020 publication in Addiction, claims that “smoking cannabis causes bronchitis, and is associated with changes in lung function.” However, the study also notes that the effects of cannabis use are “surprisingly different from that of tobacco.”

In this article, we take an in-depth look at just how different the respiratory effects are among users when it comes to inhalation of cannabis vs. tobacco smoke. We’ll also take a look at other relevant research that has been published on the topic over the past several years.

In 2007, Researchers Claimed That Smoking Cannabis Was “Worse Than Tobacco”

In 2007, the British National Health Service (NHS) published an article with the headline: “Smoking Cannabis ‘Worse Than Tobacco’.” Interestingly, the NHS has now removed the article from its website. It was based on findings from a study led by Dr. Sarah Aldington, which took place at the Medical Research Institute of New Zealand.

Dr. Aldington’s study, which was originally published in Thorax in December 2007, claimed that cannabis smokers had more damage to their airways in the lungs. As a result, cannabis users possessed an increased likelihood of developing symptoms such as chest tightness, wheezing, and coughing.

The research has been cited various times by anti-marijuana campaigners as proof that cannabis is even more deadly than tobacco.

However, the study’s authors cited numerous limitations to their data, suggesting their conclusions may have been prone to various inaccuracies and ambiguities (the complete list of limitations can be seen in the study’s original publication).

In more recent years, separate studies – such as a 2012 publication from UC San Francisco – claim that marijuana is actually “less damaging” than tobacco when it comes to overall lung health.

Cannabis & Tobacco’s Effect on the Lungs – The Truth

Even before the 2007 study – which gained international attention for its bold claim -there were studies that came to an opposite conclusion regarding cannabis vs. tobacco and lung health. 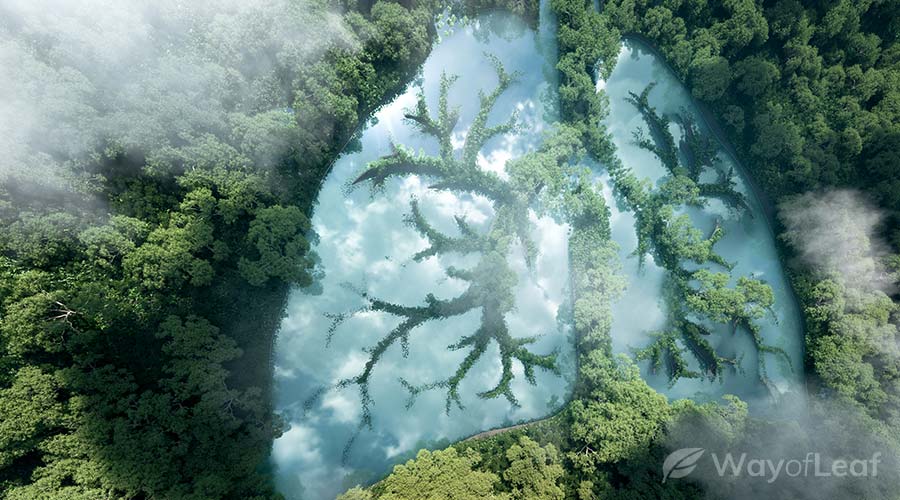 For example, data from a 2006 study led by Dr. Donald Tashkin of UCLA’s David Geffen School of Medicine found no evidence of a link between cannabis use and lung cancer. This was true even among heavy cannabis users – including individuals who “smoked more than 20,000 joints in their life.”

Additionally, a Journal of American Medical Association (JAMA) publication concluded in 2012 that “low to moderate use of cannabis in the long term [was] less harmful than tobacco exposure.”

Researchers in this study found that increased exposure to tobacco smoke resulted in a consistent loss of lung function, while marijuana exposure did not appear to have the same harmful effects on lung health. In fact, the airflow rate actually appeared to increase among people that were exposed to marijuana up to a certain level.

Most recently, a 2020 publication in the popular academic journal Addiction cites a similar relationship regarding the effects of marijuana vs. tobacco on lung health. The publication states that, while cannabis is not void of potential adverse effects on the respiratory system, there is still no evidence linking its use to the development of lung cancer or chronic obstructive pulmonary disease [COPD].

Cannabis isn’t Harmless, But it’s not as Bad on the Lungs as Tobacco

The studies referenced above largely suggest that low to moderate use of marijuana does not appear to harm the lungs as much as tobacco when used in similar amounts. That being said, this does not imply that inhalation of cannabis smoke is harmless.

For instance, the 2020 publication in Addiction notes that smoking cannabis may lead to the development of severe bronchitis, even at low exposure. The study also suggests that marijuana use is associated with a change in lung function over time. However, authors point out that there is still, as of yet, “no convincing evidence that this leads to chronic obstructive pulmonary disease.”

Instead, they suggest that cannabis use may lead to “lung hyperinflation and higher vital capacity, with little evidence of airflow obstruction or impairment of gas transfer.” It was also noted that “an association between cannabis and lung cancer [still] remains unproven,” though studies continue to produce conflicting findings.

In conclusion, concerning the ongoing debate of marijuana vs. tobacco use on lung function, contemporary research overwhelmingly suggests that the use of tobacco is more damaging to general respiratory health. However, it’s important to point out that cannabis use – particularly heavy/chronic use – is not entirely void of potentially adverse effects on the respiratory system.

Cannabis use – particularly heavy/chronic use – is not entirely void of potentially adverse effects on the respiratory system.

Even low exposure to cannabis smoke may result in the development of severe bronchitis, as well as changes in lung function over time. Crucially, however, there is still no evidence linking marijuana use to the development of lung cancer or COPD.

One interesting area of future study relates to the potential long-term effects of cannabis vs. tobacco using vape pens, e-cigarettes, and other vaporization devices. While many are already claiming that vaping is the safer option (compared to smoking), there is still far too little data on this topic to come to any definitive scientific conclusions.

Shake and Trim: What’s the Difference Between These Types of Weed?

5 Conditions That Cannabis Could Treat Instead of Pills