Halloween has become one of the most popular holidays in the United States. It is estimated that approximately 180 million Americans celebrate it annually. This equates to well over half the population. It is a celebration observed on October 31, and the term Halloween dates back to 1745. However, it is probably based on the ancient pagan festival called Samhain, which took place in Scotland, Ireland, and the Isle of Man.

For many, cannabis has become a great way to enhance the spooky sensation. After all, costumes potentially look that little bit more ‘real’ when you’re intoxicated. In this article, we’ve picked out five cannabis strains that have a Halloween theme. Experience what they have to offer, but use them sensibly.

Named after the mysterious serial killer in England who operated in the late 19th century, Jack the Ripper is a sativa-dominant hybrid. TGA Subcool Seeds bred it by combining Space Queen with Jack’s Cleaner. It is a moderately potent strain by modern standards, with a THC content of 17% against less than 1% CBD. 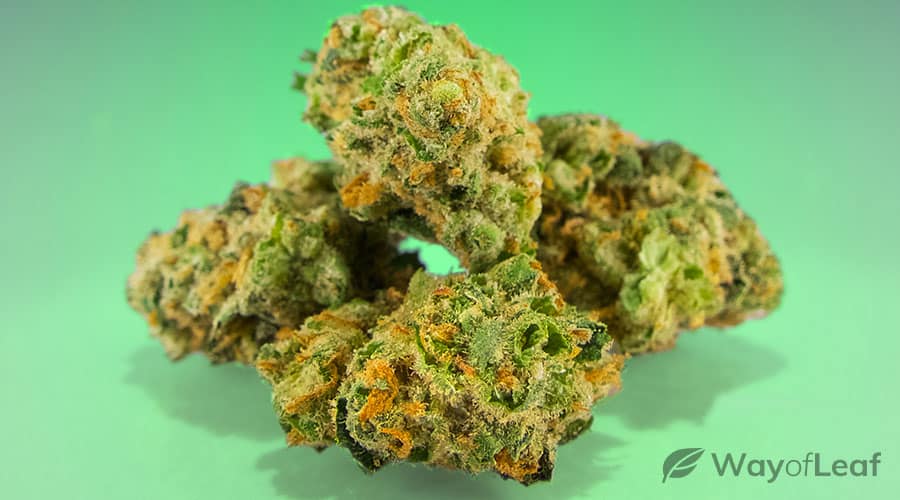 Those who use Jack the Ripper enjoy the lemon scent, coupled with the tangy and creamy taste. It is an excellent option for daytime or afternoon use. However, on Halloween night, you can try it in the evening as it will give you the desired cerebral effects. Users say they feel uplifted and energized, ideal for welcoming trick-or-treaters.

From an MMJ perspective, you might find that it helps with anxiety and stress. If you scare easily, Jack the Ripper might help you calm down as people walk around dressed as demons! If you fancy growing it, make sure you top the plants and move them to the flowering phase early. It harvests in early October outdoors, ideal for those seeking a Halloween stash.

There is little question that this strain is appropriately named for the occasion! Ghost Train Haze is another sativa-dominant hybrid. Rare Darkness bred it as a cross of Nevil’s Wreck and Ghost OG. It is one of the most potent strains on the market, with a THC content of up to 28%.

The extremely dank aroma is a sign of what’s to come. Ghost Train Haze offers a splendid citrus taste that lingers on the tongue. Unlike many sativas, this strain’s high isn’t especially energizing. Instead, you’re more likely to feel calm and relaxed. However, users must be wary as excessive usage could lead to an increase in paranoid thoughts. This is the last thing you want when you see zombies walking around.

MMJ patients enjoy Ghost Train Haze as it could help them with inflammation, arthritis, and chronic pain. Some users suggest that it enhances their level of creativity. This is ideal if you’re struggling to come up with a suitable Halloween costume idea.

This spooky strain gets its name from the pumpkin character in The Nightmare Before Christmas. It is a sativa-dominant strain that’s a cross of Killer Queen and Jack the Ripper. While it has a moderate THC level of 14% on average, Jack Skellington could cause visual distortions in novice users.

Users are often surprised by how pungent the fuel and earth aroma is. Fortunately, this doesn’t carry on into the taste, which is mild and fruity. Typically, you can expect Jack Skellington to provide you with an increase in energy levels. The cerebral effect could lead to psychedelic effects. If you’re an experienced user, this could massively elevate your Halloween experience and the holiday truly comes to life.

It is also a strain used regularly by individuals with low mood. If you’re feeling down this Halloween, Jack Skellington could give you a much-needed boost. This strain might also help you manage chronic fatigue. Perhaps you’ll even get the energy to walk around the neighborhood and enjoy the festivities.

With a THC content of up to 22%, Ogre can be a beastly strain if you’re not used to the effects. Paradise Seeds created Ogre by using a Sensi Star phenotype. It is an indica-dominant hybrid that affects the body and mind.

There are reports that Ogre has psychedelic effects, so it is wise to use it sparingly. If you have a low THC tolerance, it is best if you avoid it altogether. Otherwise, you’ll find that your mind goes into a fog, and you find it hard to focus. This would be a shame because it means you could miss out on the fun of Halloween.

MMJ patients suggest that Ogre is a useful option for stress and depression because the initial burst of euphoria helps elevate the mood. We have to point out that Ogre’s scent is pretty brutal, so be prepared. Fortunately, it tastes a lot better than it smells. The skunky and soil flavor is strong yet pleasant, and the citrus aftertaste makes you want to try more.

There’s a chance that this strain is named after the hit Queen song from the 1970s. Killer Queen is a balanced hybrid that’s a cross of G13 and Cinderella 99. Brothers Grimm, a breeder operating out of British Columbia, created it. It contains around 1% CBD, which is relatively high, and its THC content is 16% on average.

Despite the moderate THC level, Killer Queen is relatively potent. You will likely experience pressure behind the eyes as the cerebral effect takes hold. Most users say that they feel more focused after using this strain. Therefore, you can pay attention to your surroundings and enjoy the decorations that adorn so many peoples’ homes at Halloween. Alternatively, you can sit back, relax, and wait for the body high to make your limbs feel numb.

Killer Queen’s potent scent will take over whatever room you smoke it in. The tangy and sour taste also offers hints of sweetness. Its capacity to help people focus means that patients with ADD/ADHD sometimes use it. Its euphoric effects could also serve as a means of helping with a mood disorder.

Final Thoughts on the Best Cannabis Strains for Halloween

Although Halloween isn’t a time where people see their families or even get time off work, it is becoming a popular celebration. These days, people like to dress up as ghouls and ghosts, trick or treat, and watch extremely scary movies.

You can do all the above and perhaps improve the experience by trying one of the Halloween-themed marijuana strains outlined above. What is your favorite Halloween cannabis strain? Let us know in the comments section.

Related article
5 Cannabis Strains to Try Over the Holiday Season

Can weed cause schizophrenia?

9
6 min read
Join the discussion
TOC
Premium
Your subscription has ended
If you love cannabis and appreciate our content, join WayofLeaf Premium today and receive:
Best of all, part of your membership fee will go towards helping to legalize cannabis.
Go Wayofleaf Premium
No thanks, I can't afford it
I already have an account
×
Login in to your premium account