Is smoking marijuana harmful to your lungs or not? Logic dictates that it certainly isn’t good. After all, you are still combusting a substance, which brings its own implications. Then there is the small matter of exposure to carcinogens. Whether we like it or not, smoking cannabis results in the release of these cancer-causing substances. The question is whether this exposure is significant enough to warrant concern.

Proponents of marijuana use suggest that you can smoke a dozen joints a day without experiencing lung damage. Opponents of the herb insist that smoking weed is as bad as smoking tobacco cigarettes. After all, we all probably know a chain-smoker who somehow avoids respiratory problems.

Studies on cannabis are relatively thin on the ground due to the prohibition of the substance. However, there is a decent amount of available research into its effects on the lungs and breathing. Perhaps this is due to a desire to demonize the herb even further. In any case, let’s see what science has to say on the matter.

Why Is Marijuana Potentially Harmful to Your Lungs?

Frequent use of cannabis is linked to side effects such as memory loss and lung changes. The plant contains hundreds of compounds, including 110+ cannabinoids. However, when you combust cannabis, it releases a variety of chemicals. These include carcinogens such as formaldehyde, ammonia, and hydrogen cyanide.

At present, there is little in the way of evidence that smoking cannabis can cause lung cancer.

However, there is research that suggests smoking weed and tobacco increases the risk of lung cancer. The main issue is the inhalation of carcinogens. Yes, cannabis contains fewer than tobacco, but it still presents an issue. Let’s look at research that suggests a link between marijuana smoking and lung problems.

Studies That Suggest Smoking Cannabis Is Bad for the Lungs

Research into this particular issue is ongoing with data going back decades. A study by Polen et al., published in the Western Journal of Medicine in June 1993, had bad news for weed smokers. It found that frequent marijuana users utilize healthcare more often than non-users. The chief reasons included respiratory illness and injuries. The rate was apparently higher, even when involving tobacco smokers.

A study by Tashkin et al. published in the Annals of the American Thoracic Society in June 2013, looked at how marijuana smoking affected the lungs. 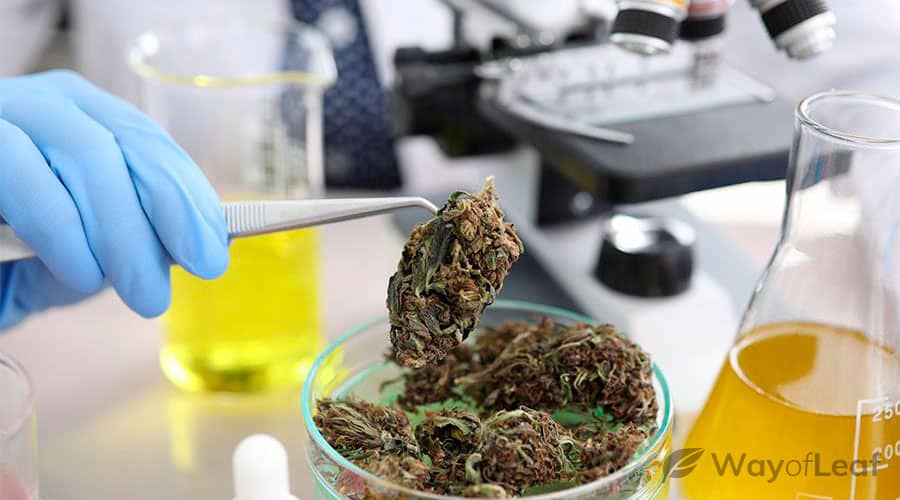 It found that regular smoking caused “visible and microscopic injury to the large airways.” The process resulted in “an increased likelihood of symptoms of chronic bronchitis that subside after cessation of use.” Yet the study also found that chronic usage didn’t cause significant abnormalities in lung function.

This came two years after a 2011 study by Howden and Naughton. They published it in the Expert Review of Respiratory Medicine. They said there was evidence that cannabis impaired lung function and damaged large airway mucosa.

One possible reason for lung damage is the different smoking habits of tobacco and cannabis users. The latter tend to breathe the smoke in deeper, and hold it there for longer. We can certainly conclude that smoking any substance is unwise if you have asthma. It is also not a good idea if you suffer from lung infection or cancer, though surely this is a matter of common sense?

In general, however, conclusive research to say marijuana smoking is terrible for the lungs isn’t widely available. It is also possible that such studies are flawed.

Related article
Can Lung Damage Be Repaired After Smoking?

Help your lungs to heal…

When conducting a scientific or clinical investigation, researchers must make sure that control is maintained over the test subjects. Let’s say a team is testing for the effects of long-term marijuana smoke on lung health, for example. How do they take into consideration potential variables that the subjects are potentially exposed to during the study?

By this, we mean variables that may harm lung health? Have they also used tobacco cigarettes, for example? What about air quality? How does the air where each subject lives compare to the air quality of the other subjects?

There are other factors to take into consideration, as well. These include the quality of the marijuana smoked and the method of smoke inhalation.

For example, if they used a joint, what kind of paper did a person use to roll it? Organic hemp rolling papers are generally considered safe and non-toxic. However, tobacco papers from blunts or cigarettes (spliffs) can contain the toxic/carcinogenic ingredients found in pre-packaged cigarettes.

Individual genetics is another massive variable in its own right that researchers must take into consideration. For example, pulmonary diseases (such as COPD) are potentially hereditary. Therefore, how would we know that decreased lung function is attributable to marijuana smoke and not some other factor or variable?

Even research that seems to spell bad news has caveats. Tetreault et al. published a study in The Archives of Internal Medicine in February 2007. The researchers looked at the effects of cannabis smoking on pulmonary function and respiratory complications. They focused on a review of studies.

Overall, they found an association between long-term cannabis smoking and an increase in respiratory complications. These included coughing, phlegm production, and wheezing. However, the team also discovered that short-term use has an association with bronchodilation. It helped improve people’s breathing!

Pletcher et al. published a study in JAMA in January 2012. It looked at the association between cannabis exposure and pulmonary function for 20 years. The researchers performed standard pulmonary function tests on over 5,100 young adults. They were part of a two-decade-long study on coronary artery disease risk. The goal was to test lung function against the number of ‘joint years’ of lifelong weed exposure.

For instance, if you smoked a joint’s worth of weed each week for 35 years, you had five ‘joint years’ of cannabis experience. You would get the same figure if you smoked one joint’s worth a day for five years. Overall, the team found that there was no evidence of adverse effects on pulmonary function up to seven ‘joint years.’

They finally saw a slight decline in subjects with more than 10 ‘joint years’ experience. However, it was not ‘statistically significant.’ In contrast, cigarette smokers showed a significant drop in lung function across the 20-year study. The fact they smoked 8-9 cigarettes a day on average didn’t help!

Research on Cannabis and Lung Health Is Ongoing

A study by Morris et al. continued to look into the issue. The team published their research in the Journal of the COPD Foundation in 2018. They looked at cannabis use’s associations with pulmonary symptoms and function in tobacco smokers. As it happened, the team analyzed current and former tobacco smokers. They assessed associations between marijuana use and pulmonary outcomes.

Of the 2,300+ participants, only 8% were current cannabis smokers, and 43% were former users. Neither previous, nor existing, cannabis use had an association with increased odds of wheezing, coughing, or chronic bronchitis when compared to those who have never used marijuana.

Overall, the study concluded that cannabis use had little to no association with poor pulmonary health in former and current tobacco users. It did state that the research couldn’t determine whether long-term heavy cannabis use without tobacco smoking could cause lung symptoms, emphysema, or airflow obstruction.

Final Thoughts on Long Term Cannabis Use and Lung

One would imagine that smoking any substance is not a great idea if you have an existing lung condition. However, the research to date suggests that smoking marijuana doesn’t necessarily damage the lungs in a healthy person. Of course, there are caveats. There is a suggestion that chronic usage could negatively impact lung function.

Interestingly, some studies suggest that short-term usage of weed may have a slight bronchodilator effect. This is certainly an unexpected development. Does it mean you should start microdosing? Who knows!

It does seem as if cannabis smoke is at least less harmful than tobacco smoke. That said, weed smoke certainly isn’t completely harmless.

At present, there is scant evidence to suggest that cannabis use is solely responsible for many cases of pulmonary disease. In contrast, there are millions of cases linked to cigarette smoking.

Ultimately, research into this critical matter continues. Until then, we can’t say whether smoking cannabis is extremely bad for your health. If you have any doubts, you can always try an alternative form of consumption. There is a growing trend towards edibles and CBD oil.

How it works and how to use it

5
3 min read
Join the discussion
TOC
Premium
Your subscription has ended
If you love cannabis and appreciate our content, join WayofLeaf Premium today and receive:
Best of all, part of your membership fee will go towards helping to legalize cannabis.
Go Wayofleaf Premium
No thanks, I can't afford it
I already have an account
×
Login in to your premium account