Ever wonder if marijuana can be detected in the body after you die? A morbid question, we know, but an interesting one. We’ve gathered some of the latest research on what can be found post-mortem, including whether cannabis can be detected.

What Is an Autopsy?

An autopsy can’t begin until someone officially declares a person deceased. An attending physician, an EMT, or a police medical examiner declares death. Once they have confirmed the death, then the autopsy process can begin.

Officials will move the body to a facility for examination. The autopsy process can then begin. It isn’t something for the faint of heart to read, so we’ll keep it short and simple. Keep in mind that autopsies aren’t always necessary. The purpose of an autopsy is to confirm the exact cause of death or to observe the effects of diseases.

During an autopsy, several things must occur:

After the procedure is complete, they replace the organs and sew up the body.

Sometimes it is necessary to complete a toxicology report. According to a recent study of cannabinoids post-mortem, most toxicology reports do not include a request for cannabis screening. There are exceptions to this rule, including when there is the death of a driver. However, even when this is the case, a post-mortem THC test can’t determine an accurate intoxication level.

This is due to a few factors, including decomposition. When decomposition begins, the levels of THC rise. Therefore, experts can’t reliably justify THC intoxication as a cause or attribute of death or an accident that may lead to death.

Another factor includes each person’s physiology. Each person, when living, has a specific ceiling for what impacts or affects their mental or physical state of being. This variance makes determining impairment levels especially tricky for medical examiners. If there are legal or criminal issues involved, this can become contentious.

As most examiners can’t reliably determine intoxication levels, it can be disingenuous to pinpoint THC as the main factor.

Also, most experts don’t order a report on cannabis due to the consensus in the medical community that marijuana is not a substance that kills. The issue becomes even murkier when the distribution of cannabinoids comes into play. Cannabinoids in the body don’t always distribute across tissues in predictable ways. 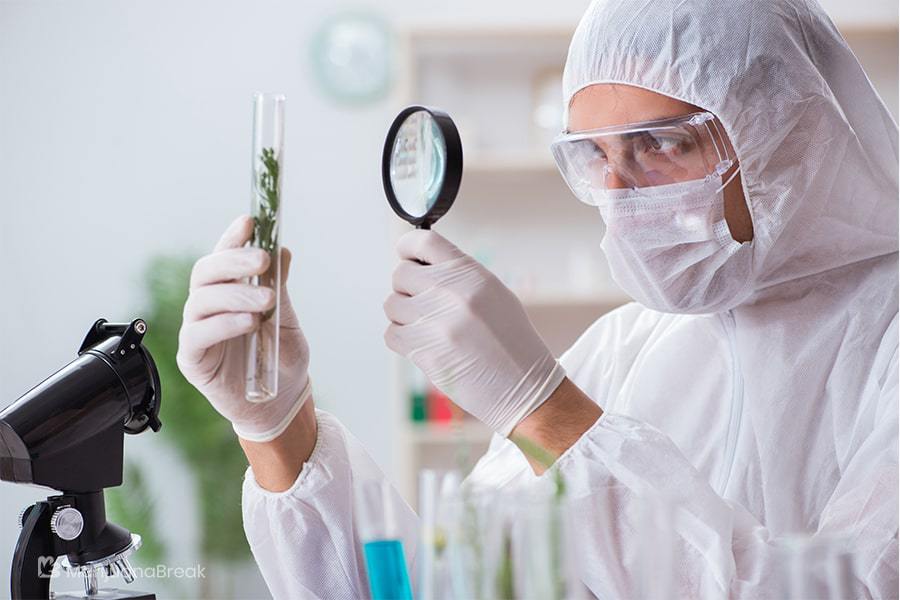 Even if someone orders such a test, it can take time, as there needs to be extensive analysis. A board-certified toxicologist, Alan Hall of Laramie, Wo., states that “some of the tests take days, weeks, months.” He goes on further to clarify that such tests rely on the experience of those doing the testing.

Others echo these sentiments. Coroner, Dr. Leon Kelly, says that when it comes to reading the THC results of a deceased individual, “That number on the page doesn’t mean anything.”

Research on THC Levels After Death

One study by an assistant toxicologist, Andrea Tully, supports the assertion that we cannot reliably measure THC levels after death. Tully states that death alters how THC acts in the body. The study supports the notion that THC results after death are unreliable. Tully says that when asked to determine if marijuana could be a contributing factor in a person’s death, “We couldn’t really answer that question.”

Tully and her team then proceeded to compare THC levels between living and deceased individuals. Tully took blood from different types of patients, including from patients shortly after they had died. This kind of blood, she states, is often in pristine form. The reason is that there are fewer bacteria and other organisms that commonly grow in the body after a person dies.

Tully goes on to say that, often, blood from an autopsy draw isn’t “clean.” It contains many elements that can obfuscate or muddy how experts read the results. The presence of bacteria and microbes, as well as fat and oils in the blood, can affect the reading. She compared samples of blood drawn right after death to samples drawn several hours later. Tully found the more extended the period that the blood sample sat, the more degraded it became. And also, the level of THC became higher.

Why Does the Level of THC Increase After Death?

What Tully’s team found was that levels of THC in fresh blood were a lot lower.

THC is “lipophilic.” A lipophilic substance tends to combine with or dissolve in fats that are in the body. This fact can cause the levels of THC to rise. However, THC metabolites are a different case.

A drug metabolite, such as THC-COOH, is the result of the body breaking down THC and turning it into a different compound. That is, the body transforms THC into something that it can handle. It is, for lack of a better term, “metabolized.”

Science has pinpointed precisely how and when a body can metabolize a substance like THC. The process is the same for everyone on the planet. These metabolites can linger in the body for a more extended period than the original substance.

Testing for THC metabolites makes it much easier to zero in on a user and their THC levels with a bit more certainty. Metabolites produced from THC don’t vary as much over time and are, instead, water-soluble. Despite these findings, it is still unclear as to how much credence to give to results garnered after death.

When it comes to litigation, things become even more complicated. In cases such as reckless or negligent driving, there may be other factors relating to the outcome. Due to the uncertainty of testing, proclaiming that cannabis is a factor that can be a bit misleading.

Studies such as Tully’s may give judges, jurors, and others in our legal system pause.

Lemos and Ingle carried out a study, which was published in the Journal of Analytical Toxicology. The study involved looking at cannabinoids in postmortem toxicology. The researchers state that postmortem toxicology screens often exclude cannabinoids due to several reasons. The most significant of these reasons, the researchers say, include their “ubiquitous nature, interpretive difficulties, and unanswered questions regarding their postmortem redistribution.”

Lemos and Ingle say that cannabinoids like THC have been included in the toxicologic evaluations, that “incomplete or erroneous inferences would have been drawn in a substantial number of cases regarding causes/manner of death.”

There isn’t a clear consensus on what intoxication by THC means for everyone. As decomposition sets in, clear and concise readings become harder to obtain. The build-up of THC in the tissues occurs at a much higher rate than when a person was alive.

This accumulation makes it difficult to gauge if a person was intoxicated or was affected by THC in a significant way. Additionally, how THC affects living people differs from each individual to the next. What may be a high level for one person may be almost negligible for another person.

Thus, there are no strict guidelines for measuring THC post-mortem. Another obstacle is the purity of samples. The longer a sample sits, the more it degrades. Higher THC levels are often a hallmark of samples that have sat for more than several hours after death. This increase in THC is due in part to its lipophilic nature.

It attaches to the fats lining the body, and, as time goes by, the levels continue to rise. Measuring the metabolites may offer a more accurate assessment, though it may not be sufficient to get a complete picture.

In the end, there’s no reliable way to test for THC post-mortem. Theories abound as to what constitutes a safe level after death. However, it is unclear if such a level contributed in a meaningful way to death or an accident.

How to Know If You’re Allergic to Weed [Definitive Guide]

Your Guide to Cannabis Allergies and Symptoms

19
8 min read
Join the discussion
TOC
Premium
Your subscription has ended
If you love cannabis and appreciate our content, join WayofLeaf Premium today and receive:
Best of all, part of your membership fee will go towards helping to legalize cannabis.
Go Wayofleaf Premium
No thanks, I can't afford it
I already have an account
×
Login in to your premium account