The Worst Things That Can Happen from Being High on Weed

If you’ve ever consumed weed, then you probably don’t need us to tell you that there are some wonderful and weird side effects associated with getting high. More often than not, the good side outweighs the bad. But that doesn’t mean that smoking weed is all sunshine and roses.

The cannabis experience isn’t great for everyone. We all know that one friend who totally loses it when they get stoned.

For some, THC-rich weed may provide an enjoyable and euphoric high, but for others, it may cause unpleasant dysphoria. According to a 2018 paper published by Harvard Medical School, panic attacks and intense anxiety are the most frequently reported side effects of smoking weed.

On the plus side, as reported by the National Institute on Drug Abuse, there have been no reports of anyone overdosing on marijuana. So although bad things can happen from being high on weed, you don’t need to worry about having a fatal overdose.

But still, nobody wants to experience the “bad side” of marijuana. So what could go wrong when you’re high on weed? Ultimately, it depends on your weed tolerance as well as your daily lifestyle. For instance, smoking your regular dose of weed may be too much if you do it on an empty stomach. Everyone differs in terms of reactions to high THC content. Nevertheless, we all risk experiencing a few bad side effects, especially when taking one too many hits.

Most people can probably recall a time when they got a little too high and had a paranoid episode. Even for the most experienced cannabis user, consuming too much may lead to anxiety and paranoia. It’s more common for inexperienced users to experience paranoia because regular users develop a tolerance towards weed. That said, no one is immune to this side effect after consuming a little too much THC.

If you feel anxious after smoking weed, the key is to not let your emotions take over. Try to calm yourself down and find a stress-free environment to relax. Also, be sure to leave a substantial amount of time before next attempting to use weed, and lower the dose to stay within comfortable limits.

Psychosis is the broad term used to describe incidents of mental illness in which a person loses touch with reality. Such incidents involve delusions, hallucinations, disturbed, and confused thoughts, along with a lack of insight and self-awareness.

There is a well-established association between cannabis use and increased episodes of psychosis. As reported in a 2016 study published in the National Library of Medicine, the risk of developing a psychotic disorder is two-fold in cannabis users when compared to non-users.

Related article
Sativa Side Effects: Understanding them All

Interestingly though, it’s not clear whether cannabis actually causes psychosis or is merely a potential side effect for people who are predisposed to the condition.

Psychosis is arguably the worst thing that can happen from being high on weed. If you’re an unlucky one who experiences weed-related psychosis, you should consider cutting back on your cannabis-use or take a break altogether.

When you smoke too much weed before partaking in memory-related tasks, you may find it almost impossible to complete these tasks. Alternatively, they may take much longer than usual after consuming too much weed. Although this side effect is not chronic and will only occur when you over-blaze, too much THC may reduce your motivation and interest in many day-to-day activities and tasks.

It’s very common for cannabis users to act completely different when they’re high compared to when they’re sober. The mood swings may make it difficult to develop interpersonal relationships due to a lack of balanced behavior. 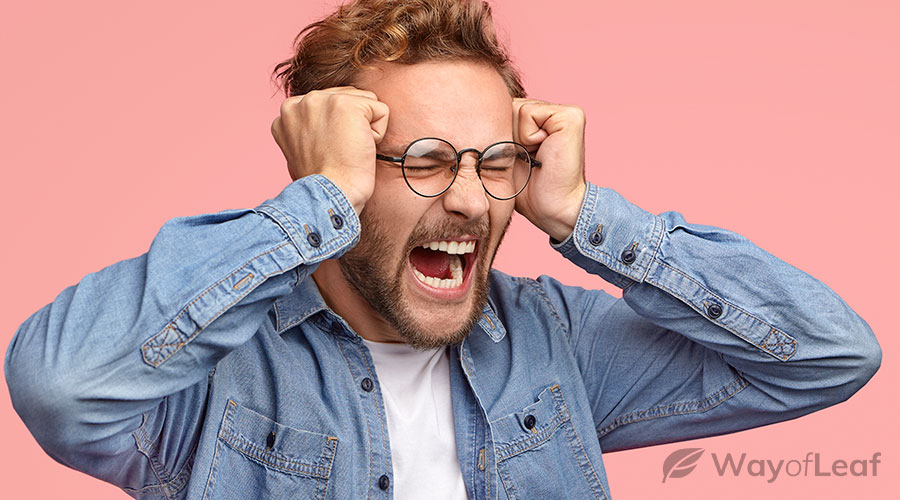 Some strains of marijuana – especially those that are high in THC – may trigger panicky “fight or flight” responses in the brain. These reactions appear to be worse in certain people and after using certain high-THC strains. Since some people react to panic with sadness, anger, or feelings of helplessness, weed may sometimes trigger these emotions.

For most people, the feeling that time is standing still after smoking weed is a sign of slower reaction times. For instance, a few minutes may feel like a few hours. To others, such as friends and family, you may display signs of slowed reactions by responding to stimuli, like a crosswalk sign, too late. Due to the risks that slow reaction times pose, operating a vehicle or heavy machinery is not recommended after consuming marijuana – even if you’ve never experienced delayed responses before.

Too much weed may make you hallucinate. This is not the same as schizophrenia because the effects aren’t permanent, and it most often happens when the potency is stronger than what the smoker expected. With a hallucination, the cannabis user might perceive something that isn’t actually present. Temporary delusions are also a possibility during a high.

People respond differently to all kinds of things; weed is one of them. What you experience after consuming weed will vary from person to person. Also, different forms of marijuana can produce unique effects. For example, edibles are known to take longer to kick in, but the high is often more intense and longer-lasting.

Everything from genetics to tolerance can change the way you experience a high. Think about it; if you smoke a lot of weed, you’re going to respond very differently than someone who does not. The more you consume, the better your tolerance for the herb. This is because your body becomes used to it, and you are less sensitive to the plant’s effects.

Well, there you have it! There are a few bad things that can happen from being high on weed. However, there are many factors at play, and only some people will experience these effects. Also, keep in mind that many of these side effects will only be triggered if you consume too much weed

A closer look at the reality of THC overdose