Old-school cannabis consumers will remember the times when it was a real challenge to get even Mexican brick weed to smoke. There was the ongoing struggle of trying to track down a black market dealer just to get some sort of decent marijuana. Top that all off with the looming, underlying fear of getting arrested. These days, it is possible to get a long list of cannabis products, from edibles and tinctures to top-shelf flower and dabs, and finally… even drinks!

CBD, the primary non-intoxicating compound in marijuana, isn’t yet federally legal. However, the 2018 Farm Bill legalized the growth of industrial hemp with less than 0.3% THC. This legislation is a boon for the CBD industry since most of the hemp grown in America is for the cannabidiol market.

In an ever-growing sector, innovation is key as companies desperately try to remain top of the pile. The CBD drinks industry’s development is clear evidence that manufacturers will do what it takes to profit from this boom.

According to a recent Grand View Research report, the CBD-infused beverages market will reach $2.8 billion by 2025. With so many options, it seems inevitable that the CBD drinks industry will continue to rise. You can get the following beverages already:

As you can see, there is already something for everyone. Let’s find out more about the companies getting involved in the CBD drinks market.

The Coca-Cola Rumor That Won’t Go Away

Canada, a country with legal cannabis sales, has a few leaders in their industry, with Aurora Cannabis being one of their top producers. When the news broke of a rumored collaboration between Coca-Cola and Aurora, Aurora’s stock skyrocketed. These rumors, however, may have been partially true, as the Canadian news outlet BNN Bloomberg reported that the two giants in their own respective industry seriously discussing the possibilities for a CBD-infused soft drink collaboration.

Though Coca-Cola denied their talks of collaboration with Aurora, the beverage giant did claim they were watching the marijuana market’s efforts towards producing a ‘functional wellness beverage.’

During this heightened time, a spokesman for Coca-Cola, Kent Landers, expressed a prepared statement that addressed the speculations. The company claimed it knew how much the CBD industry was evolving and that there may, in the future, be a possibility that a CBD-infused beverage could be produced, but Landers continued,  “no decisions have been made at this time.”

In December 2019, a YouTube video featuring a man opening a can of Coca-Cola resulted in fresh speculation. In the video, the man says the drink is infused with CBD. The can also had a childproof lid on it.

Someone swiftly took the video down. The video’s ‘star’ claimed that his father, who produces capping and bottling machines for major food and pharma companies, gave him the product. According to the man, his dad was approached by Coca-Cola in Canada to design a machine that can create a childproof cap on Coke’s cans.

Would Involvement in the CBD Drinks Market Damage Some Brands?

Coca-Cola acted quickly. Once again, Karl Landers issued a statement, this time to FOX Business. He said that the rumors were untrue and that the company had no plans to enter the CBD beverages market. 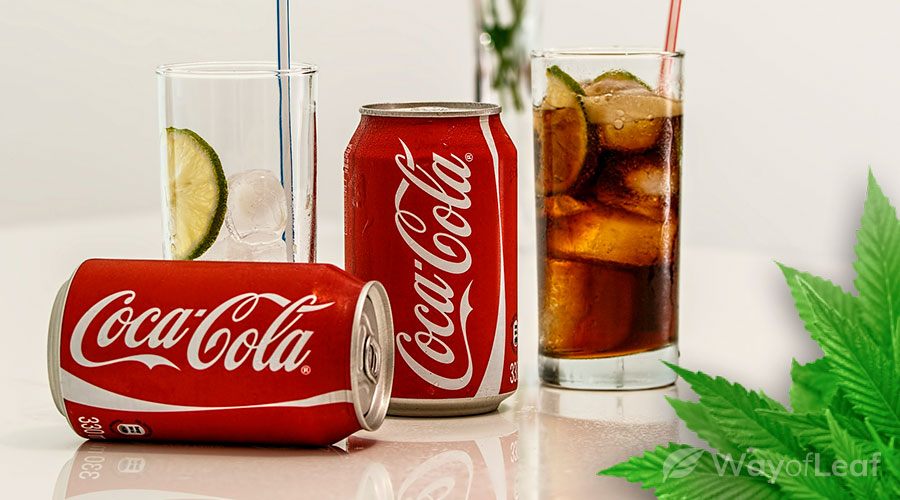 Legendary investors Charlie Munger and Warren Buffett said that it was the right decision for Coca-Cola to stay out of the cannabis industry. They believe that the brand’s wholesome image would be negatively affected.

This is also the reason why Starbucks has no intention of getting involved in the market. Its CEO, Kevin Johnson, said that CBD beverages aren’t accretive to the brand or what it stands for. Therefore, it is unlikely that too many mainstream ‘family’ brands will enter the sphere.

Are There Legal Issues to Contend With?

That depends on where the company intends to do business. In October 2019, edible and ingestible cannabis products became legal in Canada. They hit retail shelves in December of that year. It means that brands selling CBD drinks in Canada have minimal legal obstacles to contend with.

It is a different story in the United States. Unlike in Canada, neither THC nor CBD is legal. Along with Washington, D.C, 33 states permit the usage of marijuana either recreationally or legally. The vast majority of states have no issue with CBD sales.

However, the FDA doesn’t permit companies to add CBD to any human or animal foods or beverages. Indeed, it issued 15 warning letters to companies for doing so. According to the government agency, these organizations were in breach of the Federal Food, Drug, and Cosmetic Act. The FDA also says it can’t conclude that CBD is safe for use in human or animal food.

This is perhaps one reason why the likes of Coca-Cola have no interest in entering the market right now. Maybe federal legalization will change their mind.

Which is best for you? …

What Companies Are Making the Move into the CBD Drinks Market?

Aurora Cannabis seemed sure to get involved. However, when the supposed link with Coca-Cola went flat, it decided to stay away from CBD drinks. It is potentially a significant error as several of its rivals are now heavily involved.

In 2019, Canopy Growth partnered with Constellation Brands. Hexo Corp reached an agreement with Molson Coors Canada. Other key players include:

Heineken is a name that might surprise a few readers. However, the big beer brand released its first CBD beverage in 2018. Lagunitas is part of the Heineken brand, and it sells IPA-inspired drinks. One option has 10mg of THC and no CBD, and the other has 5mg of both cannabinoids.

Is CBD Effective as a Beverage?

Will mainstream, everyday individuals go down the CBD road? Not likely, according to Yasmin Hurd from Mount Sinai Hospital’s Addiction Institute. Her belief is that the drinks that would be released will not contain anywhere near a sufficient quantity of CBD to actually produce a difference.

As an example, the company Vybes has a CBD beverage available made to help regulate anxiety, memory, sleep, mood, and more, but a 14-ounce bottle contains a mere 25mg of CBD. For specific disorders, Hurd believes somewhere around 200mg of CBD daily would be needed. Though some individuals do only consume 20-30mg of CBD per day, Hurd claimed that the Vybes drink is essentially just a placebo.

Some companies are taking CBD drinks up a notch, such as Florida-based company Hemp Bombs, which sell a CBD Max Chill Relaxation that contains 75mg of cannabidiol. The big issue? The drink costs a whopping $14.99, so it’s not likely to be an everyday product for most.

Another possible issue is bioavailability or the absorption rate of CBD. A study by Huestis, published in Chemistry Biodiversity in 2009, found that the bioavailability of orally consumed CBD is between 4% and 20%. Even in the best case, it means that only 5mg of a 25mg CBD drink gets to where it is supposed to go.

However, water-soluble CBD created using nanotechnology is one way to improve this issue. Also known as nano emulsification, the process uses ultrasonic waves to turn CBD molecules into nanoparticles that are a tiny fraction of their previous size. In theory, nanoparticles bypass the internal structures that metabolize CBD. As a result, the product in question has a higher bioavailability rate.

The jury is still out on CBD nanotechnology due to the relative lack of research. The consensus is that it could work, however.

Is Mixing CBD with Alcohol a Good Idea?

Most long term cannaisseurs will say cannabis and alcohol don’t mix, but what about alcohol and CBD? Los Angeles, ahead of the curve when it comes to most trends, quickly jumped on the CBD cocktails wagon, the LA bar scene exploding with options. In addition to cocktails, CBD-infused beers have already been on the market for a while now.

Both alcohol and CBD tend to produce a relaxing effect, so it would be understandable to think combining the two would lead to an even more potent effect. The reality is, it is important to exercise real caution when combining these substances, as this doubling up can produce strong effects for some, particularly if a lot of alcohol is consumed.

CBD is not intoxicating by itself, but it can possibly over enhance the impacts from drinking alcohol. This could lead to a significant loss of control, inhibitions, and coordination.

Combining CBD and alcohol, though, may not be all bad. In 1980, a study by Cunha et al., published in Psychopharmacology expressed how individuals that drank alcohol alongside a 200mg capsule of cannabidiol had lower blood alcohol levels than those who drank only alcohol. Oddly enough, the same impairments in cognition and motor coordination could still be seen amongst the two groups.

Final Thoughts on the Future of the Cannabis Beverage Market

At the end of the day, it is likely going to be especially challenging for a CBD beverage developer to generate a high-quality product that also contains enough cannabidiol to have an impact, while still remaining affordable to the general public. Currently, CBD drinks for sale are pricey on a CBD percentage to dollars ratio. In a few years perhaps, a rising level of competition will reduce the price point.

Related article
Best CBD Drinks – How Do They Compare?

A more refreshing way to take …