A triple-barrel joint consists of three single rolled joints bound together with a hemp wrap. The result is a single super-sized offering. It is not for novice smokers due to its immense potency. Instead, it is better suited to a seasoned cannabis smoker looking for a more intense experience.

Here’s our easy-to-follow guide on how to roll a triple-barrel joint.

How to Roll a Triple Barrel Joint

The simplest way to make a triple-barrel joint is to roll three separate single paper joints. Make sure that they all have individual crutches at the end of around one inch in length. A crutch is also known as a filter or a tip. It is a mouthpiece usually made out of glass or wood pulp.

The simplest way to make a triple-barrel joint is to roll three separate single paper joints.

It acts as a handle for a joint, making it easier to hold or pass to someone else. The crutch also protects your hands and lips from being burned. This is because it acts as a buffer between the hot cannabis and your mouth and fingers.

The crutch also prevents the joint’s base from becoming soggy when sharing it with friends. Using a crutch for each joint in the triple-barrel joint will also help with the airflow. It stops the end of the joint from collapsing in on itself. A crutch is useful when rolling a joint, too. It provides a perfect cylinder shape, which makes it easier to pack your bud in more evenly.

Include Equal Portions of Cannabis

Symmetry is the word of the day when outlining how to create the perfect triple-barrel joint. It is best to try and ensure all three single joints are as closely matched as possible. You want them to burn evenly to get the best results from your triple-barrel joint. Ensure that you put an equal amount of weed in each joint and spread it as evenly as possible.

Roll each one tightly. However, you’ll likely find that the joints will begin to loosen as they burn. This is a good thing. It enables you to move the joints in the hemp wrap gently and ensure they line up. 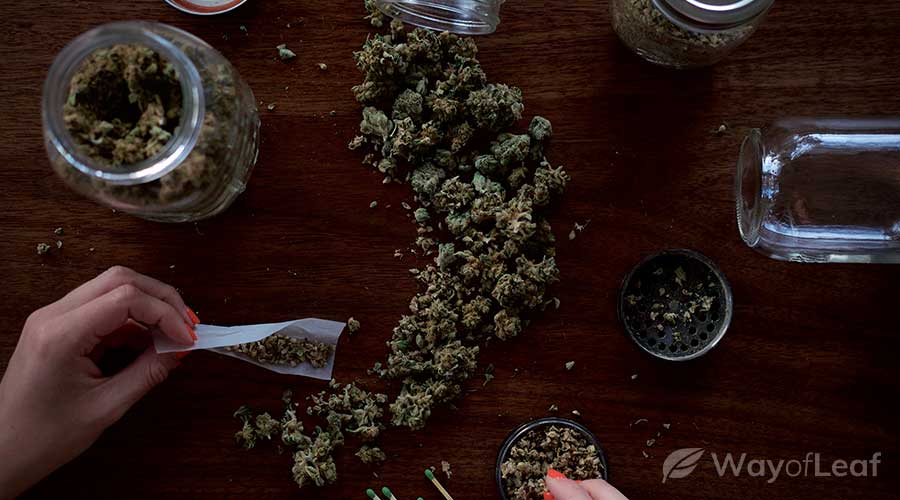 Once you have rolled all of your joints, bind them together with a hemp wrap. In terms of the structure, place two of the joints side by side. Ensure the third joint is sitting on top, creating a triangle type design. This will make it easier to smoke your creation instead of having all three joints side by side.

Light all three of the joints at the beginning, so they burn evenly right from the start. When smoking your triple-barrel joint, keep rotating it after each puff. This process helps it burn more evenly. It also allows each joint to receive equal airflow. Keep an eye on each joint as you smoke to make sure they are burning evenly.

Final Thoughts on the Triple-Barrel Joint

A triple-barrel joint is not for the faint-hearted, nor is it suitable for a novice smoker. The intensity of the high is overwhelming for an inexperienced cannabis smoker. Depending on your tolerance levels and experience, opt for a cannabis strain with an average THC level.

Smokers who have tried the triple-barrel joint say it is just the ticket for a steamroller high.

When making a triple-barrel joint, roll each joint individually, and try to make them as similar as possible. This means adding the same amount of herb to each one and lining the three joints up correctly.

The triangle-type structure, with two joints at the base with one sitting on top, works best. You should use a crutch for each joint and a natural hemp wrap to bind all three joints together.

Smokers who have tried the triple-barrel joint say it is just the ticket for a steamroller high.

Related article
What Is a Weed ‘Tarantula Joint’?

What they are and how to make …