Now that medicinal marijuana is legal in 33 states, you would expect the number of weed-related arrests to fall. This is especially the case in the 11 states plus D.C. where recreational cannabis is now legal. We’ve known for a long time that the police are not arresting ‘kingpins.’ Back in 2010, over half of all drug-related arrests in the United States were for marijuana, and 88% of all weed arrests were for possession.

In the Midwest, 53% of all drug arrests are for cannabis, compared to 48.7% in the South, 49.6% in the Northeast, and just 15% in the West where most states have legalized the substance.

Why Are Marijuana Arrests Increasing Again? 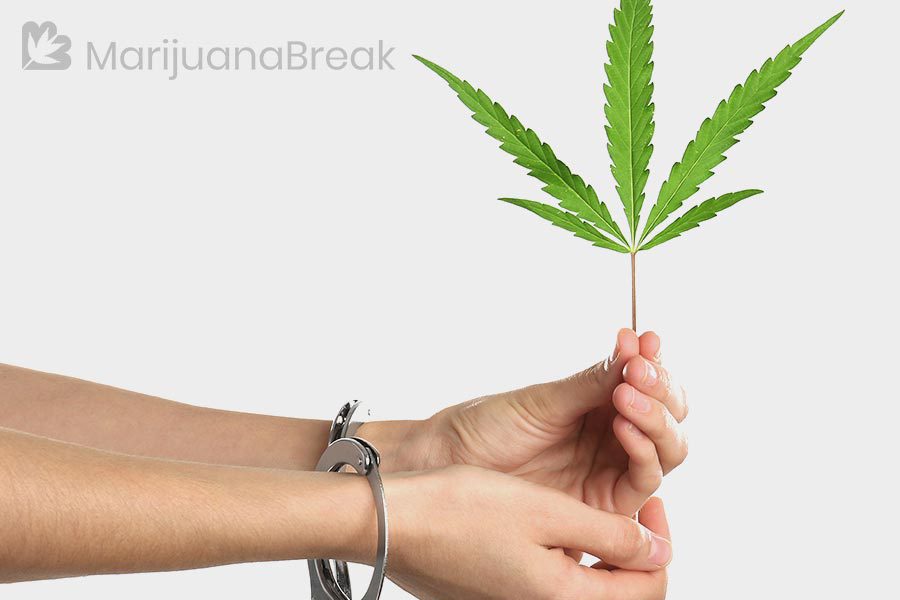 The FBI report which outlined the new arrest data pointed out that it equated to a weed bust every 48 seconds somewhere in America. It seems astounding that in a nation with around 100 opioid-related deaths each day, a non-deadly substance is being targeted in this manner.

These figures are especially stunning because recreational marijuana is legally available to around 20% of the population, and almost every state has legal protections for medicinal weed or its extract. One of the main reasons for the spike in arrests is that states where cannabis is illegal or is only legal for medicinal use, are tougher than ever on marijuana use and possession.

Before I provide the number of arrests per state, I will discuss the top three states for weed busts.

The Keystone state ranks #3 for marijuana arrests and 83% of the almost 24,000 arrests were for possession. At least certain politicians see the problem and are trying to do something about it. In Philadelphia, there is a major effort underway to reduce the volume of arrests for minor cannabis offenses.

In February 2018, District Attorney, Larry Krasner, announced that his office would no longer prosecute marijuana possession offenses. Several cities such as Pittsburgh and Harrisburg have also adopted decriminalization ordinances.

The state’s newly elected governor, Phil Murphy, has pledged to legalize the recreational use of marijuana in New Jersey and is trying to push through a bill. Medicinal marijuana is legal as long as you can prove you have one of the qualifying symptoms. If you don’t have an MMJ card and are found with Mary Jane in your possession, the law will come down on you like a ton of bricks.

At present, weed users in New Jersey are arrested at the highest rate in the United States; up to one-third of all arrests in the state are for cannabis. In 2016, over 35,000 people were arrested for marijuana possession: More than for any type of theft, rape, murder, or assault combined.

African Americans comprise just 13% of the population but make up for 36% of arrests. Across the state, one in every 187 adults was arrested for weed possession. It is also a fact that the smaller towns in the state are the toughest on the herb. Ex-governor, Chris Christie, comes from Mendham Township in Morris County. Its population is less than 6,000, but almost 200 people were arrested for weed possession in the town; a figure that comprises two-thirds of all arrests.

The 64% arrest rate for weed possession is by far the highest in the state. Towns such as Montville (27%), and Middletown (20%) are less strict while only 8% of arrests in Hazlet are for marijuana possession. Only Texas had more cannabis arrests in 2016. Since 2007, weed arrests in the state of New Jersey have increased by 60%.

If you are caught in possession of fewer than 50 grams, you could receive a six-month jail term and a $1,000 fine. Possession of over 50 grams could result in a jail sentence of 18 months. The NJ Supreme Court has ruled that cops only need ‘probable cause’ for searches which makes them far more likely to find a couple of grams in a car.

They say that everything is bigger in Texas, and that’s certainly true when it comes to marijuana arrests. Approximately 12% of America’s marijuana arrests were made in Texas in 2016. An incredible 98% of all weed arrests in the Lone Star State were for possession; a crime that could result in 180 days in prison and $2,000 fine if you have less than two ounces. At least the number of arrests in 2016 fell a little from the 2015 figure.

Even so, as you will see in the table later on, Texas takes the lead in marijuana arrests and it isn’t even close. The figure of 65,000 arrests is almost 30,000 more than New Jersey, its nearest rival. In 2017, Texan lawmakers introduced legislation to decriminalize minor offenses, but no vote was held in the House of Representatives.

As a result of this inaction, cities such as San Antonio and Houston have created ‘cite and release’ programs. As part of these programs, if you are arrested for a minor weed crime, you don’t get punished with a criminal record as long as you finish a pre-trial diversion program.

Number of Arrests By State in 2016

Without further ado, here is a state-by-state list of marijuana arrest figures. All data is from 2016 unless stated and was researched by an associate professor of criminal justice at Shenandoah University, Jon Gettman.

*Florida does not provide statistics for marijuana arrests.

The biggest ‘crime’ that is occurring here is the crazy volume of marijuana arrests. An overwhelming number of arrests are for minor violations, and sadly, African Americans continue to be unfairly targeted. In 21 states, there were more arrests in 2016 than in 2014, even as more states legalized the herb.

In 2008, Fate Winslow, an African American male, was down on his luck and homeless. He was caught in an undercover sting where the officer initially asked him for a prostitute. Instead, Winslow returned with $20 worth of weed and received $5 ‘commission’ for his trouble. Winslow was arrested and went to trial, while the seller got away scot-free.

Instead of taking a plea, Winslow fought the charge but was found guilty by a mainly white jury and sentenced to life in prison! Had had non-violent priors but now languishes in Louisiana’s notorious Angola Penitentiary. In a country where white middle-class men steal millions of dollars and receive short prison sentences in cushy jail cells, Winslow’s predicament is particularly galling.

Sadly, he is only one of many; a statistic in a failed war that only benefits private prison contractors and police officers seeking easy overtime. Those in possession of small amounts of marijuana are less likely to be violent, so represent a lower risk for an arresting officer.

It isn’t all bad news. In mid-2018, the New York Police Department announced plans to slash arrests for publicly smoking weed by half but will continue to arrest those with previous convictions. The new policy took effect from September 1, 2018, but does not curb an officer’s power to stop and search anyone they believe is using weed.

As it also doesn’t prevent those with previous arrests from being searched, those who fear racial profiling will not feel any sense of relief. What the NYPD is doing does not go far enough, but it is a start at least.