Vaping to Help You Quit Smoking: Does It Actually Work?

The entire vaping industry was valued at approximately $19.3 billion in 2019. America had by far the most significant share of the market, comprising over one-third of global sales. From around five million vapers in 2011, the number escalated to over 40 million in 2018.

Some suggested that it was an overreaction, and perhaps an effort to protect Big Tobacco. This is possible, though the impact of vaping on the tobacco industry is possibly overstated. After all, the industry is still worth over $800 billion per annum!

Even so, it is clear that there is a trend towards former tobacco cigarette smokers switching to vaporizers. However, does vaping help you quit smoking, and is it safe?

Why People Are Fleeing Tobacco

The data is there for all to see. Cigarette smoking is responsible for at least 480,000 deaths in the United States per annum. Globally, the habit kills around six million people each year. Here are some facts about tobacco provided by the CDC:

There are many reasons why you should stop smoking, aside from health concerns. Freeing yourself from the clutches of cigarettes mean you will:

Why Is It So Hard to Quit Smoking?

There is over half a century of data that showcases the harm associated with tobacco cigarettes. Yet so many smokers find it incredibly hard to kick the habit. Even today, more than 1.1 billion people smoke around the world, with thousands joining their ranks every day.

Tobacco smoke contains approximately 5,000 chemicals. The most famous is nicotine, a drug at least as addictive as heroin. Big Tobacco has cynically modified its products with additional compounds to make them even more pleasurable.

When you consume nicotine, you release a feel-good chemical called dopamine. In between each cigarette, the level of nicotine in the brain drops. This process raises stress levels and creates a ‘need’ to smoke. The user perceives that they feel calmer after lighting the next cigarette, which only reinforces the habit.

Nicotine also acts as a stimulant and helps people concentrate. Amongst regular smokers, NOT having a cigarette causes them to have issues with their focus.

According to the CDC, only 7.5% of adult cigarette smokers succeed in quitting each year. It often takes multiple attempts. Also, there are numerous side effects, otherwise known as withdrawal symptoms, when you try to quit smoking. These include:

Related article
CBD for Quitting Smoking: Why Aren’t You Trying It?

Could CBD help you kick the ha…

How Could Vaping Help You to Quit Smoking?

The ‘cold turkey’ approach, where you quit suddenly with no ‘aids’ such as nicotine patches, is highly unsuccessful. Experts believe that only 3-5% of people who try this method successfully quit smoking for more than six months. The vast majority of ‘successful quitters’ use assistance in the form of nicotine patches or gum.

However, a significant number of people now try vaping as a means of quitting cigarette smoking. In the UK, research by the House of Commons Library found that 33% of British adults specifically vape to quit smoking.

Vaporizers are designed to mimic the ‘action’ of smoking. Many devices resemble tobacco cigarettes in appearance, and you take drags and exhale similarly. Perhaps most importantly, e-liquid cartridges contain nicotine, one of the main reasons why people smoke. E-cigarette advocates loudly proclaim that it is a safer habit than ‘regular’ cigarettes. The e-liquid contains significantly fewer chemicals than its tobacco counterpart.

Tobacco cigarettes contain set amounts of nicotine. Once you light one up, you are incredibly likely to finish it. In contrast, you can take a few puffs from a vape device whenever you get the craving. Also, you can get e-liquids in different nicotine strengths. Eventually, you could wean yourself off nicotine. Begin with a cartridge containing 24mg of nicotine, for example, and work your way down. Finally, you buy the nicotine-free e-liquid and break free of your addiction.

At least, that’s the theory. That said, there is evidence that vaping is somewhat useful when it comes to quitting tobacco cigarettes.

The Evidence to Date

A study published in JAMA in July 2019 looked at the association between e-cigarette use and smoking reduction. It looked at 5,000 daily smokers in France for an average of two years. According to the data, smokers who vaped used fewer cigarettes per day. There were also 50% more likely to quit entirely than non-vapers.

However, the study also looked at 2,000 former smokers. It found that these individuals were more likely to relapse back to smoking if they used electronic cigarettes. The researchers concluded that e-cigs were useful tools to reduce tobacco cigarettes in the short-term. However, it isn’t necessarily a useful long-term habit. 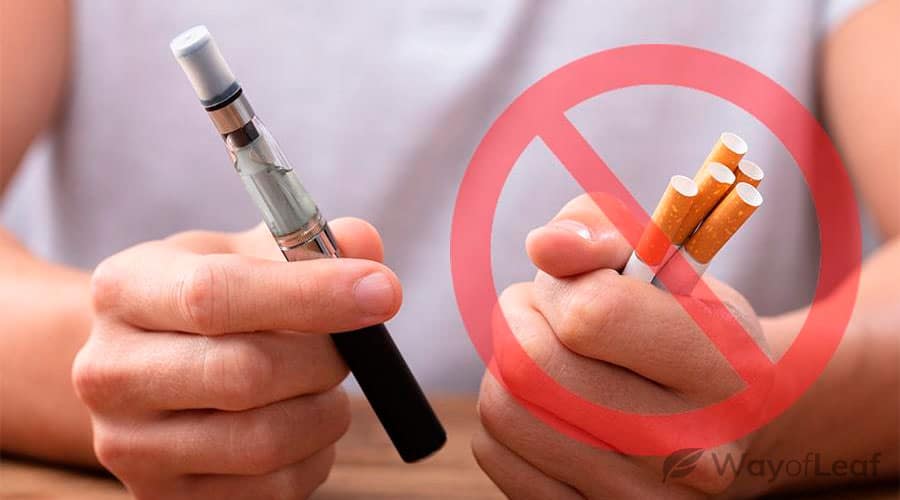 The study also had some interesting findings on newer e-cigarettes. It seems as if improved technology increases the risk of a relapse. A significant proportion of people who relapsed only quit smoking relatively recently. It appears as if the newer generation of e-cigarettes delivers more nicotine to the bloodstream.

A study published in The New England Journal of Medicine (NEJM) in February 2019 compared the efficacy of e-cigarettes for quitting smoking with nicotine replacement therapy. Examples of this therapy include nicotine patches. A total of 886 smokers were chosen for the experiment. After a year, the abstinence rate was 18% in the e-cigarette group, compared to just 9.9% in the nicotine replacement group.

This showed that e-cigarettes beat nicotine patches and similar products. However, 82% of vapers continued to smoke after a year! Moreover, 80% of e-cigarette users who quit tobacco continued to vape.

The NEJM study is one of several involving ‘dual users.’ These are individuals who use e-cigarettes and tobacco cigarettes. Research to date suggests that vaping only serves as a temporary means of lowering tobacco use amongst dual users. It doesn’t seem to help them permanently quit.

A study published in the British Medical Journal in May 2017 only highlighted this finding. It compared three groups:

After 24 months, 61% of e-cigarette only users continued to avoid tobacco. However, just 23% of the tobacco group achieved this feat. More pertinently, 79% of dual users abandoned e-cigarettes and went back to tobacco only after two years.

Is Vaping as Safe as We Think?

The vaping epidemic involved black-market products with chemicals such as vitamin E acetate. It isn’t necessarily a reflection of what happens to the body when you vape. Most tobacco users who switch to e-cigarettes have their eyes wide open. They don’t assume it is safe but believe it is less harmful than tobacco.

In general, it is a valid assumption. It doesn’t produce as many carcinogenic substances as tobacco smoking. However, it isn’t anywhere near as safe as some health authorities have claimed. A review by Public Health England in 2015 concluded that e-cigarettes were 95% less harmful than tobacco, for example. This is possibly an overstatement.

Many of the issues surrounding vaping relate to the thinning agents it contains. For years, propylene glycol (PG) was widely used. After all, it is FDA-approved for use in food. However, harmful things happen when it is heated. Once exposed to a temperature of 446 degrees Fahrenheit, it produces a significant degree of formaldehyde, a known carcinogen.

Why it's the only sensible cho…

While it likely doesn’t harm the lungs as much as cigarette smoke, vaping triggers potentially harmful immune responses in the lungs. Then there is the small matter of the poorly regulated vaping industry. Countless disreputable companies are selling low-grade vape juice. Even the machinery in particular vaporizers could cause you to inhale tin, nickel, and silver.

As we mentioned earlier, it seems as if vaping companies are changing the formula of e-juice to make it more addictive. After all, why would you WANT to lose customers to complete nicotine abstinence?

Final Thoughts on Whether Vaping Helps You Quit Smoking

Overall, it seems as if vaping is safer than tobacco smoking. However, it doesn’t mean it is safe in itself. Evidence to date suggests that vaping could help you quit smoking in the short to medium-term. However, there still isn’t conclusive evidence of its long-term efficacy. Indeed, in dual users, it seems more likely that they will return to their old tobacco habit.

You may find that a multi-pronged approach works best. For example, you could try vaping with nicotine patches and gum.

The ultimate goal is to reduce and, eventually, eliminate your nicotine dependence. If you find yourself vaping nicotine quite often, perhaps the juice you are using is taking hold over you. At this stage, you have jumped from one addiction to the next.

Has Your County Banned Cannabis Use? [Answered]

20 Best Songs to Listen to While High

Vaping vs. Smoking: Which is Best