At the time of writing, marijuana is still the most widely used ‘illicit’ drug globally. Best estimates suggest that up to 250 million people use it! Despite this, the plant is only legal for adult use in Canada and Uruguay. There is a strong possibility that Mexico will soon become the third country to legalize marijuana.

In the United States, 35 states now technically permit medical marijuana. However, several states are years away from the actual implementation of an MMJ program. A total of 15 states allow recreational cannabis. Again, however, it could take years for the framework to be put in place.

The combination of prohibition and popularity means the black market for marijuana continues to thrive.

Most importantly, cannabis remains federally illegal. The combination of prohibition and popularity means the black market for marijuana continues to thrive.

The value of the legal market in the United States is approximately $13.6 billion. Some estimates suggest it will grow to almost $30 billion by 2025. However, the black-market dwarfs its legal counterpart. One report from a few years ago suggested that illegal sales comprised 87% of the market!

Increased legalization and the pandemic have narrowed the gap, but it remains huge. The black market for cannabis in America is worth around $63 billion, almost five times what is sold legally.

But the Legal Market Is Fighting Back, Right?

It was always going to be the case where the black market would suffer due to legalization. Even before the raft of new legislation, black market sales had fallen by 3% from 2015 to 2016. Recreational legalization in California was a significant step in the right direction. With the likes of New Jersey following suit, the next few years should see a massive boost in legal sales.

A Grand View Research report suggested that the global legal marijuana market could be worth an incredible $146 billion by 2025! Surely, this is the end of the black market?

Unfortunately, illegal weed is not going away any time soon. Let’s say total marijuana sales in the United States stands at around $80 billion per annum. Even if the legal market exceeds $25 billion, it is worth less than one-third of the total. Therefore, a positive scenario still sees the black-market worth double what is sold legally.

California has the largest cannabis market by far and still suffers from a major problem regarding illegal sales. Estimates vary, but at least 70% of marijuana sold in the Golden State comes from an illegal source. In 2019, total sales were close to $12 billion. However, only $3 billion came from a legal source.

Many years on from the beginning of recreational sales and Colorado continues to fight a losing battle. Illicit sales are thriving, even though there are hundreds of legal dispensaries in the state. Criminal gangs in the state are growing marijuana and transporting it to states where it is illegal! They can sell it for a significantly higher price than if they sold it legally in cities such as Denver.

Unfortunately, Colorado is now a major hub for illegal marijuana activity. Criminal enterprises legally grow the herb. Then they send it to states such as Alabama and Georgia, where it is illegal. For example, in Alabama, cultivation is a felony offense with prison sentences varying from two years to life! While the legally grown weed is trafficked to multiple states, it seems as if Florida, Texas, and Illinois are the most profitable areas.

Why Is Black Market Cannabis So Popular?

One of the reasons is because dispensaries in legal states require you to show ID. Medical marijuana patients must also show their MMJ card. Recreational users must be aged 21+.

The taxes one must pay on marijuana is also a factor. In California, for example, there are state, retail, and local taxes. You can expect to pay anywhere from 20-40% in extra taxes in most recreational states. This tax doesn’t apply when purchasing it from a street dealer. Paying $100 less per ounce is a rather appealing proposition. 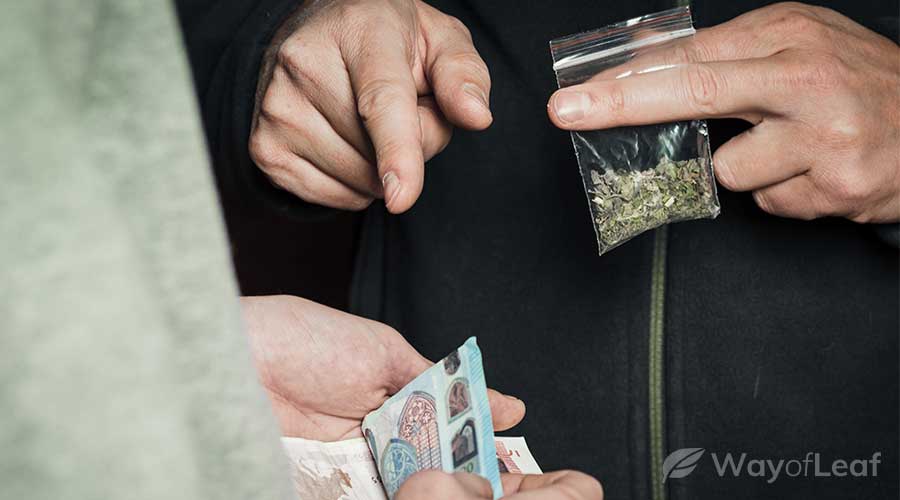 It is also important to note that not every part of recreationally legal states permit cannabis use. Many counties in Colorado and California don’t allow the sale or use of marijuana. In the Golden State, only half of the counties opted into the recreational program in 2019.

Finally, plenty of experienced consumers claim that the black market weed they imbibe is better than legal marijuana.

How the Black Market Hurts the Marijuana Industry

In Canada, an estimated 651 metric tons of weed were consumed in 2017. Around 99% of it came from the black market. Up to 120 metric tons were exported illegally to the United States. Now that cannabis is legal in Canada, the level of black-market activity has dropped.

In Canada, an estimated 651 metric tons of weed were consumed in 2017. Around 99% of it came from the black market.

However, it is still extremely high. One year into full legalization and the legal market was worth around $1 billion. Unfortunately, black market sales were at least five times that amount. Criminal gangs now transport cannabis grown legally in Canada to American states.

The marijuana they grow in Canada and places like Colorado is of a high standard for the most part. Why wouldn’t it be? They can grow it using the same techniques as growers who sell their weed to dispensaries. There is so much information about growing weed at your fingertips these days. As a result, you can provide decent marijuana after a little bit of trial and error.

The real danger is criminal gangs mass-producing garbage weed to cut corners. There is still a proliferation of low-quality schwag, or ‘brick weed,’ doing the rounds. Those who smoke this type of marijuana report nothing more than a nauseating feeling followed by a throbbing headache.

Gangs looking to make a fast buck have no issue in quickly growing marijuana without any regard as to the quality. In states where it is illegal, beggars can’t be choosers, so dealers get away with selling rubbish.

If this was the only problem, we could overcome it through full legalization. However, there is a potentially deadly issue coming to the fore. Addicts continue to chase a high that becomes harder to achieve. Sellers are responding by offering marijuana laced with fentanyl, a deadly narcotic. Fentanyl is 50 times stronger than heroin. There are reports of people who were believed to have only smoked cannabis dying from an opioid overdose.

Related article
5 Signs That Your Weed is Potentially Contaminated

Fentanyl is a highly dangerous substance used to cut drugs such as heroin. It is cheap and easy to produce. Once you use it, there’s a strong likelihood that you’ll get hooked. From that point onward, ‘regular’ marijuana won’t be strong enough. Sadly, failure to wean yourself off fentanyl means that one day, you’ll probably end up on a mortuary slab prematurely.

There is also the small matter of continuing gang violence. Like all illegal drug industries, the black market for cannabis causes an untold number of deaths and anguish each year.

As long as marijuana remains a federally illegal substance, it is going to aid the black market. Weed lovers in states such as Florida will gladly help Colorado’s criminal gangs. This is because they can’t get recreational marijuana legally in their home state. In a bid to keep costs down and profits up, these enterprises will cut corners to mass-produce low quality cannabis.

A flood of schwag and fentanyl-laced marijuana will diminish the herb’s overall quality and badly hurt its reputation. Imagine smoking weed medicinally for the first time only to be punished with low-grade garbage. You would assume that’s how all cannabis tastes and revert to opioids to treat your pain.

Full legalization may not destroy the black market, but it would boost the overall standards. To survive, black market dealers would have to raise their game and produce better quality marijuana.

2
6 min read
Join the discussion
TOC
Premium
Your subscription has ended
If you love cannabis and appreciate our content, join WayofLeaf Premium today and receive:
Best of all, part of your membership fee will go towards helping to legalize cannabis.
Go Wayofleaf Premium
No thanks, I can't afford it
I already have an account
×
Login in to your premium account