Medicinal marijuana is accessible to over 200 million Americans in 33 states. It is legal recreationally in 11 states plus Washington, D.C. This is great news for weed advocates. However, there is a growing concern that people are driving under the influence of cannabis. This is a dangerous act that increases the risk of a traffic accident.

Marijuana is an intoxicant that can slow down a person’s reflexes and make them less aware of other motorists. However, it isn’t easy to measure the level of THC in a person’s blood. In Colorado, for example, law enforcement can arrest motorists that have 5 nanograms of THC in their blood.

There is little scientific research to determine how that figure, or any other figure for that matter, correlates with impairment. It is entirely plausible to have 5+ nanograms in your blood even if you haven’t used weed for several days. Regular users could quickly build up a tolerance, and 5 nanograms of THC wouldn’t cause impairment in their blood.

The police can pull over a driver and measure their blood alcohol content (BAC) with a breathalyzer aid. Various companies are trying to create a marijuana equivalent. However, at present, police officers in many states have no method of checking an individual’s THC level.

Traffic Fatalities Since Marijuana Legalization – Is There an Increase?

In March 2017, a truck crashed into a church bus in Concan, Texas, killing 12 people. According to the National Transportation Safety Board (NTSB), the likely cause of the accident was the truck driver under the influence of a sedative and cannabis. The NTSB is adamant that there is a significant increase in drug-impaired drivers on American roads. It asserts that we must do something as soon as possible.

A study by Lane and Hall, published in Addiction in February 2019, found a correlation between marijuana legalization and increased traffic fatalities. The researchers looked at traffic fatalities in Colorado, Oregon, and Washington. They are three states that legalized recreational marijuana. The study also looked at nine neighboring jurisdictions. In the first six months after legalization, Oregon, Colorado, and Washington had one additional traffic death for every one million residents.

In the first six months after legalization, Oregon, Colorado, and Washington had one additional traffic death for every one million residents.

There was a similar increase in traffic deaths in neighboring jurisdictions. This is mainly because people drive across state lines to buy the weed. There were a total of 170 extra deaths during the six months.

However, this wasn’t the end of the story. The increase was only a temporary one, and the rate of traffic fatalities returned to normal after 12 months. The study did not investigate or explain the reason why this happened. One theory is that after the initial legalization of recreational weed, there was a rapid increase in inexperienced users. They got behind the wheel without realizing how stoned they were.

A Challenging Question to Answer

What’s clear is that trying to determine whether weed causes an increase in road deaths is a difficult task. As the substance is federally illegal, there is relatively little research into its effects. We are seeing studies providing very different results when trying to answer the question.

In October 2018, the Highway Loss Data Institute (HLDI) and Insurance Institute for Highway Safety (IIHS) performed a pair of studies. They discovered that there were 6% more traffic accidents in states where weed is legalized. This increase was in comparison to neighboring locations where marijuana is still illegal.

Related article
What Are Cannabis Breathalyzers – And What Do They Check For?

The study compared statistical data from Oregon, Washington, Nevada, and Colorado (recreational weed is legal in all of these states) with Wyoming, Utah, Idaho, and Montana (where it is not recreationally legal).

The study even controlled for specific factors, including driver age, location, weather, seasonality, and employment status. Paul Armentano, the deputy director of NORML, was skeptical of the findings. He outlined a few demographic differences the studies didn’t account for. These included the number of vehicles on the road, tourism, and population density.

What Does Recent Research Say?

A study published in JAMA in August 2020 is one of the most recent on this topic. It looked at the impact of recreational legalization in Washington and Colorado. The researchers looked at data from 2005 to 2017.

They found that legalization has led to 75 more deaths per annum in Colorado. However, it found no similar change in Washington state.

A different study in JAMA in August 2020 looked at traffic fatality rates in the first four states to legalize recreational weed. It suggested that if cannabis were legal in every state, it would result in 6,800 more road deaths a year. It was the equivalent of two extra deaths per billion miles traveled. This was compared to 20 states with no adult-use marijuana laws. 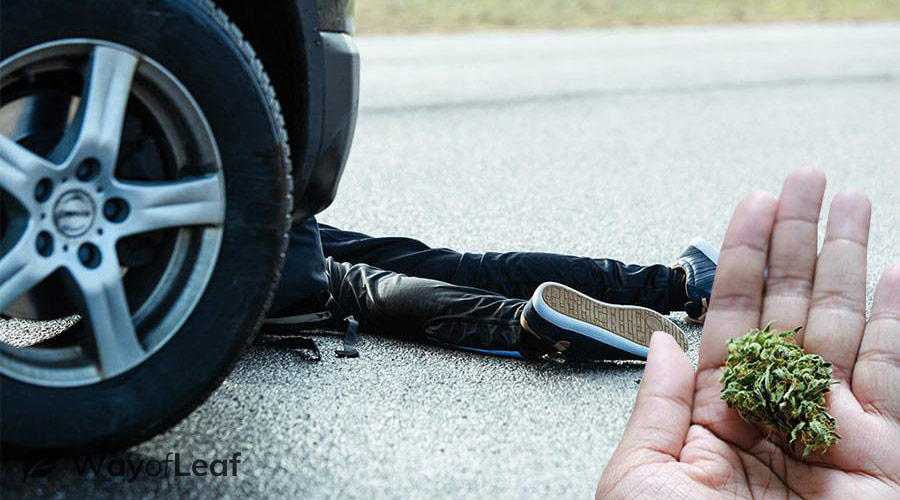 However, these studies lack information on whether the motorists were intoxicated by THC when they crashed. Even if toxicology tests detected THC after a crash, it isn’t proof that the driver was under the influence. Also, recreational laws could impact the use of other drugs such as alcohol.

The four-state study accounted for factors such as seatbelt laws, maximum speed laws, and employment rate. However, the authors admitted it did not consider other factors that may have influenced traffic deaths.

For every study that suggests weed leads to an increase in road deaths, another says it is not the case. A study by Aydelotte et al., published in the American Journal of Public Health in April 2017, looked at data from motor vehicle crash fatalities in Colorado, Washington, and eight ‘control’ states.

The team analyzed data from 2009 to 2015. This enabled them to look at traffic fatality statistics from before and after recreational legalization in Colorado and Washington. The study found that the motor vehicle crash fatality figures were similar in the periods before and after legalization.

Related article
Has Crime Increased in States Where Marijuana is Legal?

Hansen, Miller, and Weber published a fascinating study in The National Bureau of Economic Research in March 2018. They created something called ‘synthetic controls’ to analyze whether marijuana legalization has increased traffic deaths.

The team created a hypothetical version of Colorado to see what would have happened if the state didn’t legalize cannabis. The team found that recreational legalization didn’t have a noticeable effect on traffic deaths.

There is a correlation between marijuana legalization and the number of deaths on American roads in legal areas. However, it doesn’t necessarily mean the herb is responsible. The Hansen study found that the number of fatal accidents where the driver tested positive for THC increased by 10% from 2013 to 2016. Moreover, there was a 92% increase in Colorado and a 28% increase in Washington.

However, this is an overly simplistic and inaccurate way of looking at things. There are plenty of instances where drivers were found with another substance, aside from THC, in their system. In the truck driver in Texas, he had also used a sedative, which could have impaired his ability to drive.

In the truck driver in Texas, he had also used a sedative, which could have impaired his ability to drive.

A combination of marijuana and alcohol is incredibly dangerous. A French study by Martin et al., published in PLOS in November 2017, looked at the link between marijuana, alcohol, and fatal traffic accidents.

Research hasn’t reached a definite conclusion. However, logic suggests that being under the influence of marijuana DOES increase the risk of a traffic accident. Regardless of whether you are using potent opioids, weed, or alcohol, impairment is certain. That fact alone increases the risk of causing, or being involved in, a road accident.

Drivers don’t seem to understand the level of impairment they feel when under the influence of cannabis. It is easy to evaluate the level of alcohol impairment, but there is no standardized marijuana test.

Marijuana legalization continues to spread. This means an increased risk of motorists making bad decisions about using cannabis before getting behind the wheel. An increase in the number of weed users equates to more impaired drivers on the road.

Motorists need to make better decisions. Also, law enforcement requires additional tools and training to detect impaired motorists before they cause an accident.

Is it a safe extraction method?

6
8 min read
Join the discussion
TOC
Premium
Your subscription has ended
If you love cannabis and appreciate our content, join WayofLeaf Premium today and receive:
Best of all, part of your membership fee will go towards helping to legalize cannabis.
Go Wayofleaf Premium
No thanks, I can't afford it
I already have an account
×
Login in to your premium account