It Isn’t All Good News

Technically, 35 states have official MMJ programs, while a couple more have forms of medical marijuana available. Fifteen states permit recreational cannabis, although sales haven’t begun in several of them.

There is a lot to suggest that the industry is moving in the right direction. Yet, there are many issues we still need to address. The Republicans no longer have control of the Senate, and there is a Democrat in the White House. However, there are still plenty of obstacles preventing further progress. We explore five of them in this article.

There are 15 states without a ‘proper’ MMJ program. This figure includes places such as Virginia, which allows CBD oil with a maximum of 5% THC. Several of the 35 states with medical marijuana legality have yet to permit the actual sale of the plant. However, this isn’t the main issue.

As long as cannabis remains federally illegal, it will remain a case of individual states creating rules. In general, the Republican party has strongly opposed legalization, although the likes of Dana Rohrabacher have supported it in the past. He lost his seat in the House in the 2018 elections, however.

We now have a situation where there is a Democrat President for four years. The party also controls the House and narrowly has a Senate majority thanks to the Vice President’s tiebreaker.

As long as cannabis remains federally illegal, it will remain a case of individual states creating rules.

Will President Biden make the giant leap to full legalization? There is a possibility. His stance on the issue has softened in recent years. Also, Chuck Schumer is now the Senate majority leader. Schumer has already introduced cannabis legislation. Furthermore, six Republican senators come from states that permit adult-use marijuana.

While all of this is positive, it is a stretch to assume it will lead to full legalization. Nonetheless, there is a chance that the MORE Act, which passed the House in November 2020, could succeed. If passed, it would decriminalize marijuana federally. The MORE Act would also ensure federal courts expunge non-violent cannabis convictions.

On a state level, New York may elect to permit recreational cannabis now that New Jersey has. If this occurs, it will open up the possibility of several eastern states following suit.

While the legal market grows, the illegal sale of marijuana also continues to thrive. This is the case in the United States and Canada. America’s northern neighbor legalized marijuana for adult use in October 2018.

Canadian adults can purchase legal cannabis with ease (though some locations haven’t permitted it). Nonetheless, many marijuana users continue to try the black market. One reason is due to the rising prices of dispensary cannabis. In late 2019, the average price of a gram on the legal market was $10.30, illegally purchased marijuana cost just $5.73 a gram. Moreover, black market customers claim their product is better.

It is a similar story in the United States. One of the biggest issues to contend with is the high tax on cannabis. This is something that black market customers don’t have to worry about. MMJ patients are exempt from certain taxes, but recreational users are hit hard. Here’s a quick look at some of the taxes involved in select states:

The above doesn’t factor in the myriad of other local taxes. While states use the revenue for various useful purposes, this cuts no ice with cannabis users. Reduced taxation could help, though it is unlikely. Federal legalization would hurt the black market but not end it by any means.

The federally illegal status of marijuana hurts legitimate businesses in legal states. Traditional banks and financial institutions want nothing to do with such enterprises. This is because they’re worried about losing their licenses. After all, handling cannabis accounts is an illegal activity federally, even in adult-use states like California.

Cannabis companies are damaged in many ways because of this issue. It is harder for them to find a safe place to store cash. They struggle to take credit or debit card payments. Organizations in the industry also face extremely high tax rates of up to 70%. 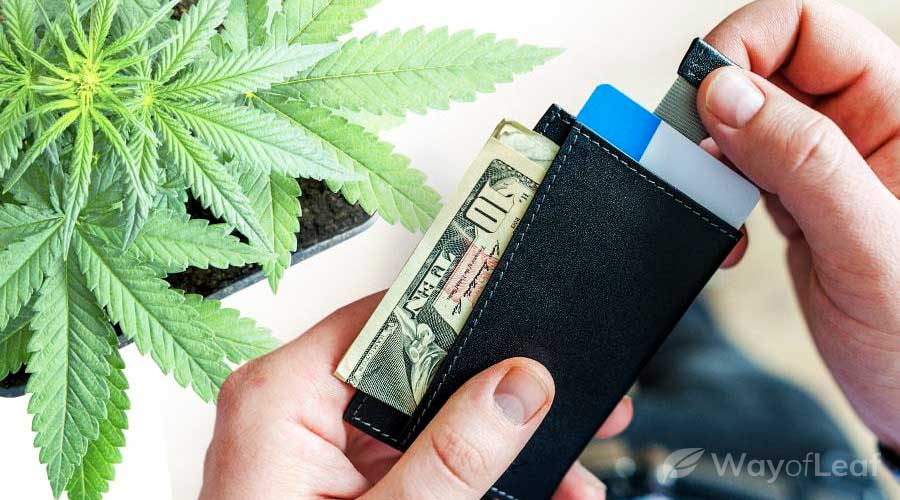 These days, there are credit card processing and merchant banking options for marijuana and CBD companies. However, as it is a high-risk industry, such institutions can justify issuing high charges.

The STATES Act would help alleviate many of the banking problems faced by marijuana companies. If it becomes law, it would recognize the legality of cannabis and its laws in America’s states. As a result, companies operating legally in places like Colorado would operate more normally. They would benefit from tax deductions and could open bank accounts.

Some analysts believe the STATES Act is likelier to become law than the MORE Act. Once again, we’ll have to wait and see if a Democrat government makes any significant moves.

Despite the growing level of cannabis legalization, the prohibited federal status of the plant makes research difficult. Even today, the University of Mississippi is the only place where marijuana research is federally legal.

The government established the program in 1980, and Professor Mahmoud ElSohly has been in charge since the beginning.  There are no qualms about the level of effort being put into researching cannabis in Mississippi. However, the strongest strains grown there contain just 13% THC. In the modern era, cannabis with 20+% THC is commonplace.

As a result, ElSohly and his team’s findings aren’t necessarily applicable in the real world. It is also a fact that the cannabis used in these studies isn’t always tested for contaminants.

For every other research team, cannabis study is stalled by the federal government’s lack of action. The Mississippi monopoly means that other researchers find it challenging to find samples or earn funding. Most studies on marijuana’s therapeutic effects, therefore, involve synthetic cannabinoids.

Researchers looking to make a breakthrough have to wait several months to gain approval for small amounts of cannabinoids. Until the feds change their stance, cannabis research in the U.S. will continue to lag behind places like Israel.

The number of ethnic minorities arrested for cannabis-related offenses remains disproportionately high. An ACLU report from 2020 shows that black people are 264% more likely to be arrested for cannabis possession than white people. This is even though both ethnicities use the drug at similar rates.

Also, African-Americans are more likely to be arrested in every single American state. The ACLU also found that the above holds in 95% of counties with 30,000+ people where a minimum of 1% of residents are black. The states with the worst rates of racial disparity are Montana, Kentucky, and Illinois.

All but a handful of states either allow small amounts of cannabis or have decriminalized the act.

All but a handful of states either allow small amounts of cannabis or have decriminalized the act. This will hopefully lead to a significant reduction in arrests across the board. It remains to be seen whether this will also result in a decrease in racial disparity.

At present, there is also a severe lack of diversity in the cannabis industry. African-American entrepreneurs own an estimated 4% of marijuana businesses.

This is likely to remain a persistent issue. The cost of opening a cannabis company is enormous and generally requires outside investment. According to Harvard Business Review, black business owners receive approximately 1% of all venture capital funding.

In a general sense, the growth of the cannabis industry is good news for those who enjoy using the plant. However, even as more states legalize it, the federal government has not budged on the issue in over 80 years.

It seems unlikely that the Biden Administration will make such a huge change. What may happen is that legislation such as the MORE Act or STATES Act will pass into law. If that occurs, perhaps it will help solve a few of the issues outlined in this article.

20 Best Songs to Listen to While High

Why Is Marijuana Called 420? [The Moniker Explained]