The Rise of the “Pot-Bots” – Technology That’s Disrupting How Cannabis Is Grown and Sold.

With the rise in recorded cannabis sales coinciding with legalized markets, cannabis tech is on track to become the new dot com boom. Giant agri-tech notwithstanding, WayofLeaf takes a look at some consumer-facing, nifty technology that is currently available on the market for prosumers and professionals.

The greenbox robotics automated budtender machine is to cannabis what the first Automated Teller Machines (ATMs) was to the banking industry. Customers were able to withdraw or deposit money anytime they wanted. Waiting times in lines inside the bank became partially obsolete, while operational efficiencies increased.

Now a somewhat similar technology holds the potential to disrupt the cannabis industry. Greenbox automated cannabis kiosks use robotic arms and even artificial intelligence (A.I.) to enable customers to purchase cannabis and cannabidiol (CBD) products without interacting with a human.

There should be tremendous potential for this technology, considering  35 U.S. states have legalized medical cannabis, and 15 states have legal adult-use recreational marijuana markets (including Illinois, which plans to launch its legal recreational pot market soon). Additionally, hemp CBD now legal at the federal level in the U.S. 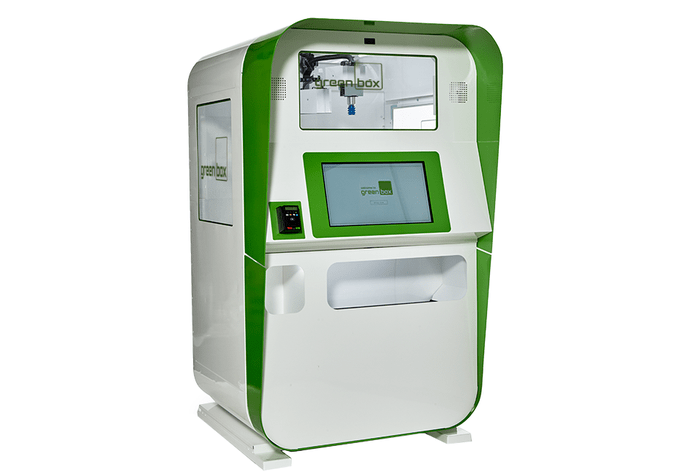 Why the technology is so appealing

While it is easy to dismiss cannabis kiosks as mere vending machines, there’s a lot more to these cannabis “robots” than meets the eye.

Greenbox THC dispensing robots and its counterpart the CBD-dispensing aquatic blue marinabox use facial recognition to authenticate customers’ I.D. cards. The system also uses a touchscreen interface that allows customers to select multiple cannabis products in one transaction. Customers can get detailed information on the differences between various products to help them make their purchase decisions. The robots even utilize A.I. to make customized recommendations based on the customer’s buying patterns – similar to what Amazon.com does.

Once the cannabis products are selected, a robotic arm retrieves and dispenses the items. The customer even gets to watch the robot at work through shatterproof glass. Payment can be made using credit cards, debit cards, Apple Pay, or Android Pay.

While all of this makes shopping for cannabis or CBD products easy and convenient for customers, the companies that operate the cannabis dispensaries win, too. Just as banks did with ATMs, cannabis retailers improve their operational efficiencies and can tremendously boost their revenue per square foot.

Greenbox Robotics CEO Zack Johnson stated in a recent interview with Mary that his robots debuted in January, at Erba dispensary, in Los Angeles.

Bifarm grow units (or space buckets as they were referred to back in the day) are similar to the concept of Seedo and Leaf except neither of those are available yet commercially. Bifarm is the only precision controlled high-pressure aeroponics system. Most of the other home systems use hydroponics. Bifarm’s system is designed for aeroponics working conditions, which is dependant on precision nutrient delivery, and root area temperature stability. However, aeroponics works more efficiently if the conditions are right.

Bifarm doesn’t provide lights, casing, or air filtering, because growers might already have them, and the selection gears towards what lights to select, as an example. Other than home use, the grow box works for R&D purposes, such as in schools, labs, and seed companies. Cornell University’s agri-tech center has Bifarm’s AeroKit.