Synthetic cannabinoids have become increasingly popular over the past decade. These substances are sometimes known as ‘synthetic cannabis’ or ‘fake weed’ due to their similarities to natural marijuana. They go by names such as K2, Spice, Scooby Snax, and Mr. Happy.

Whatever the name, unlike marijuana, the effects of these synthetic cannabinoids are unpredictable and dangerous. They carry a high risk of side effects and are potentially contaminated with other harmful chemicals.

For example, between March and May 2018, the Illinois Department of Public Health reported 164 cases of severe bleeding due to contaminated synthetic cannabinoids. Sadly, some of these cases resulted in death. The above is just the tip of the iceberg, as drugs such as K2/spice have been available for over a decade.

In 2010 alone, soon after synthetic cannabinoids became ‘mainstream,’ the number of ER visits attributed to these drugs exceeded 11,000. That number has increased significantly in the last decade.

In this article, we discuss all you need to know about synthetic cannabinoids like K2/Spice. We also explain why you should avoid them and choose natural cannabis instead.

What Are Synthetic Cannabinoids?

Synthetic cannabinoids are human-made chemicals that affect the body similarly to THC, the psychoactive compound in cannabis. They are part of a larger group of chemicals known as ‘new psychoactive substances’ (NPS).

It is believed that synthetic cannabinoids were invented by a scientist looking for ways to manipulate specific receptors in the body. According to one estimate, scientists created over 300 new chemicals designed to activate cannabinoid receptors.

Today, the manufacturers of these chemicals create them in labs and then spray them onto dried plant material for smoking. They can also make them into e-liquids for use with vaporizers.

Stores sometimes market synthetic cannabinoids as ‘herbal incense’ with labels stating that they are not for human consumption. However, potential users are generally well aware of the effects of these products. The feeble warning is nothing more than a case of manufacturers avoiding liability.

These products tend to come in brightly colored or psychedelic packaging that aims to attract customers looking for an easy high. Furthermore, they are available in head shops, gas stations, and novelty stores as well as online.

This makes synthetic cannabinoids highly desirable and accessible. This is especially the case for younger consumers who may struggle to access cannabis. Indeed, Spice is the second most widely used illegal drug amongst high school students in the United States.

What Are the Different Names Given to Synthetic Cannabinoids?

One of the reasons why there are so many varieties of synthetic cannabinoids is legality. Each time one of these intoxicating substances becomes illegal, its manufacturers simply change the chemical formula slightly and sell it under another name.

How Do Synthetic Cannabinoids Work?

Synthetic cannabinoids work in a similar way to natural marijuana by interacting with the body’s endocannabinoid system (ECS).

The ECS plays a role in maintaining a state of balance inside the body, despite ever-changing external factors. It is involved in mood, movement, appetite, pain perception, immunity, and many other crucial functions.

The ECS carries out these functions using chemicals called endocannabinoids. These chemicals act on cannabinoid receptors, a process that helps elicit their various effects. 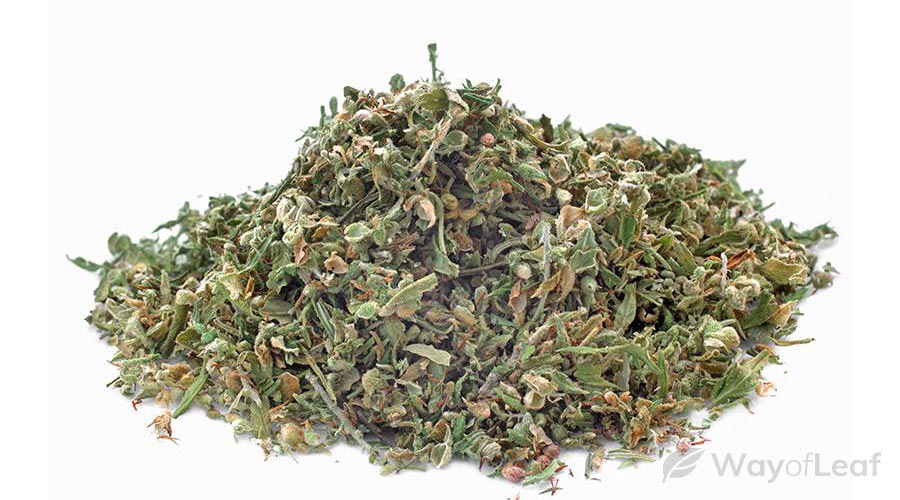 Coincidentally, the THC in cannabis has a similar molecular structure to our natural endocannabinoids. This allows it to bind with CB1 receptors in the brain to produce a psychoactive high. Although THC induces much more potent effects than our endocannabinoids, synthetic cannabinoids are stronger still.

While THC only binds partially with CB1 receptors, synthetic cannabinoids bind with them fully. This leads to fast and powerful effects, which are not always desirable.

K2 and Spice have been around since at least 2008. In the years following their release, an additional 500 synthetic drugs were created. This is because the ‘secret scientists’ continued to change ‘recipe’ to avoid drug scheduling.

Part of the reason why synthetic cannabinoids are so dangerous is that they are unpredictable. For one thing, the chemical composition can vary slightly from batch to batch. This might not sound significant, but even small changes can cause a dramatic difference in results. One doctor described taking such drugs as playing ‘Russian Roulette.’

Related article
Can You Pass Away from Getting Too High?

The reality of THC overdose…

Furthermore, many of these products contain contaminants in addition to synthetic cannabinoids. Some manufacturers reportedly add ingredients such as benzodiazepines and opioid derivatives to boost their product’s intoxicating effects.

What this means is that when you use synthetic cannabinoids, you never quite know what to expect. Therefore, it is essential to understand that these products come with a long list of possible adverse effects.

They have also caused an unknown number of deaths, although the figure is likely significant. Apart from the episode in Illinois, over 100 people in New Haven, Connecticut, overdosed on K2 in two days in 2018. There were also overdose clusters in Brooklyn in 2018, Lancaster County in 2017, and Dallas in 2014.

The side effects of synthetic cannabinoids include:

Additionally, increasing numbers of people are being admitted to emergency rooms with the following issues following synthetic cannabinoid use:

Experts have linked long term use of synthetic cannabinoids with a litany of mental health problems, including psychosis and schizophrenia. There is also a genuine risk of addiction to these substances. Withdrawal symptoms include:

Cannabis is the most popular illicit substance in the world. People from all walks of life love its uplifting and relaxing effects, as well as its possible therapeutic benefits.

Another reason why marijuana is so in demand is its reasonable safety profile. It is impossible to say that natural marijuana is completely free from adverse effects. However, it is significantly less dangerous than synthetic cannabinoids. It appears that the effects of natural cannabis are far more enjoyable, too.

In fact, research has shown that a staggering 93% of people who have tried both substances prefer the real thing. They reported more pleasurable sensations, greater functionality, and a longer-lasting high. Cannabis also caused fewer ‘hangover’ effects, adverse reactions, and paranoia compared with the synthetic version.

Perhaps one of the reasons that natural cannabis produces more enjoyable effects than its human-made counterparts is something known as the ‘entourage effect.’

In the marijuana industry, experts use this term to describe how the compounds in cannabis work together. This process produces benefits more significant than the sum of their parts.

One of the best examples of this is how CBD can take the sting out of THC side effects, such as anxiety and paranoia. CBD is another component of cannabis, and it has an interesting effect on CB1 receptors. Rather than binding with them directly as THC does, CBD changes the shape of these receptors slightly.

This means that THC cannot bind with CB1 receptors so readily, reducing many of its adverse effects. Other cannabis compounds such as terpenes and flavonoids may also contribute to this effect while possessing many benefits of their own.

The effects of marijuana are not necessarily predictable. However, it doesn’t vary significantly in quality as long as you deal with licensed dispensaries.

Why Do People Use Synthetic Cannabinoids?

Natural cannabis is superior, so why do people use synthetic cannabinoids at all? There are several reasons.

In some cases, it all comes down to availability. In states where cannabis is illegal, those seeking a high turn to either black market dealers or synthetic cannabinoids. Most people would prefer not to get involved with criminal activity, so synthetic cannabinoids often seem like an easier option.

Price is also a factor for some users. In most cases, products like K2/Spice are far cheaper than high-quality buds from the local dispensary. However, most people would agree that it’s well worth paying for the real thing. Furthermore, it is possible to find mid-grade cannabis at surprisingly reasonable prices. You simply need to know where to look.

Finally, some people use synthetic cannabinoids to beat routine drug tests. When you use natural cannabis, THC metabolites can remain in your system for days or even weeks, depending on the frequency of use. K2 can stay in your urine for up to 72 hours. However, most drug tests don’t look for the compounds found in this synthetic cannabinoid.

As a result, some people believe they have found a perfect way to cheat the system. But with so many risks associated with synthetic cannabinoids, it is a foolish idea.

Final Thoughts on Synthetic Cannabinoids Such as K2/Spice

Whenever nature produces something amazing, humans will believe they can do a better job. This is not the case with synthetic cannabinoids.

Although these products provide a quick, cheap high, they are also unpredictable and extremely dangerous.

They can cause a range of unpleasant side effects, which can seemingly come out of nowhere as the high kicks in so fast. In some cases, synthetic cannabinoids can even lead to potentially fatal side effects such as heart and kidney damage.

Although not everyone is lucky enough to have access to real marijuana, we recommend steering clear of synthetic cannabinoids at all costs. There are definitely better ways to get high than risking your life with K2/Spice.

How Cannabis Might Help You During COVID-19 (Or Any Pandemic)

Ganja in English: Does It Translate?

More than just another word for weed?

CBD Studies for Dogs: What Does Science Actually Say?

CBD for your four-legged friend

Keep it fresh and long lasting!