The perception of cannabis use has changed significantly in the United States since the beginning of the 21st century. The ‘image’ of marijuana has improved, probably because of the thousands of studies which show that it is a viable form of medicine. One of the most interesting findings shows that weed is potentially an effective means of weaning people off opioids.

As you know, the nation is in the midst of an opioid epidemic with almost 100 people a day dying from an overdose related to these drugs. In 2015, Dr. Gary Witman of Canna Care in Massachusetts said that 75% of his patients were able to come off ‘hard drugs’ with the aid of weed.

The thing about marijuana is that the public believes it knows everything about it already, when in reality, they know relatively little. With that in mind, here are five shocking cannabis statistics that you’ve likely never heard about before.

1 – Over 60% of Americans Believe Pot Should Be Legalized

We were shocked to learn this one ourselves! If you were to listen to the media as a whole, you would expect the public to be against marijuana legalization. The likes of Jeff Sessions consistently appear on television to warn about the apparent dangers of the herb, and of course, they tend to do so by spouting erroneous statistics and half-truths with no basis to their argument.

Fortunately, the American people have escaped from this particular rabbit hole as data from Pew Research has shown. In 1969, only 12% of Americans believed cannabis should be legal, compared to 84% who were happy for it to remain illegal. The figure for legality increased to 30% in 1980 but after President Reagan’s ‘War on Drugs’, the number plummeted to just 16% in 1990.

Even in 2007, only 32% of us wanted weed legalized. But then things changed for the better as medical research showed the impact of marijuana on conditions such as depression and chronic pain, and states like California and Colorado started to become trailblazers for the legalization and medicinal use of the herb. At the time of writing, 29 states plus D.C now allow weed for medical use, and nine of them allow it for recreational purposes.

The changing public perception is apparent in current Pew data as well. The latest poll for example, taken in 2017, showed that 61% of Americans believed it was time to make marijuana legal. And for the record, African-Americans have the highest level of support at 71%, while only 52% of Hispanics are in favor of legalization.

The ugly truth is that racial bias exists in many areas of American life; most notably in the ratio of black and white men who get arrested for weed-related crimes. On average, a black man is 3.73 times more likely to feel the long arm of the law than his white counterpart, with the majority of arrests for small-time possession of Mary Jane.

Sadly, there are places in America where the racial disparity is even greater. In the Philadelphia suburbs, for instance, black adults are seven times more likely to be arrested for pot than white adults, according to statistics. In Washington D.C, African-American males are 11 times more likely to be arrested for public consumption than a Caucasian male. Is this because black people smoke more weed? No! Blacks and whites smoke at roughly the same rates, which makes these statistics even worse.

The case of Fate Vincent Winslow is among the most egregious instances of the scales of justice tipping in favor of whites. Winslow is currently serving life in prison for selling two dime bags of weed to an undercover cop in Louisiana, as he was homeless and in desperate need of cash. Meanwhile, whites caught selling small amounts of marijuana may avoid prison altogether.

According to a study by J. Michael Bostwick and published in the 2012 Mayo Clinic Proceedings, 9% of cannabis users are at ‘lifetime dependence risk’. In other words, if you smoke weed, there is a 9% chance that you’ll become ‘addicted’. If you think that’s a high number, perhaps you’re right. 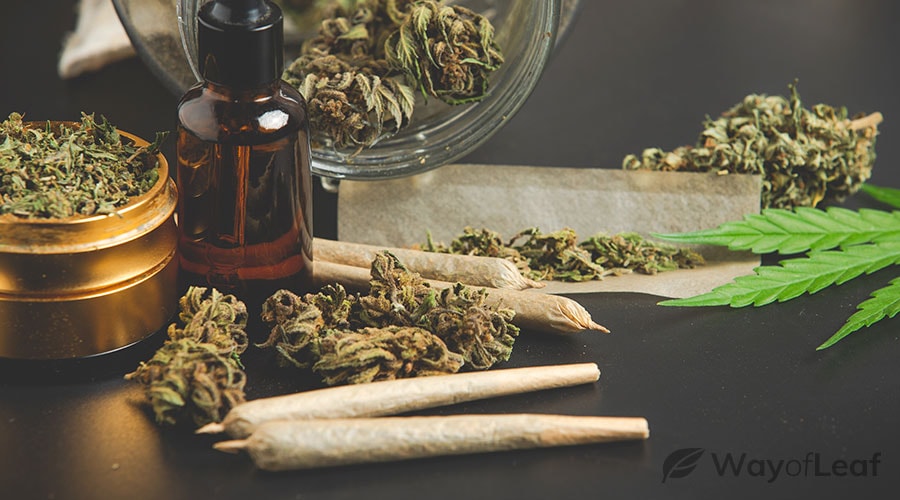 However, it is far lower than the addiction rate for nicotine (32%), heroin (23%), cocaine (17%), and alcohol (15%). In basic terms, cigarettes are almost four times more addictive (and significantly more harmful) than weed. Oddly enough, nicotine is not a ‘controlled substance’ to the relief of the multi-billion-dollar tobacco industry. The enormous pharmaceutical industry also breathes regular sighs of relief that its deadly and addictive opioids are still widely available.

Research also suggests that there is almost zero chance of becoming hooked on weed if you don’t try it until you’re 25 years of age. Carl Hart, a psychiatrist at Columbia, has countered suggestions that marijuana legalization will result in a higher addiction rate. His research has found that even hardened drug users will take money instead of taking a hit of meth or a joint filled with crack. In other words, when drugs are widely available, people are less likely to take them.

4 – You Can Die from Marijuana Use – All it Takes is 800 Joints in a Single Sitting!

Marijuana has been used by humans for thousands of years, even though certain parts of society suggest that it is a great evil that causes death and destruction. If it does, it is sure taking its sweet old time because in recorded history, there have been zero marijuana overdose deaths. In contrast, at least one person in the United States will have died from an opioid overdose by the time you finish reading this article.

It is, however, theoretically possible to die from a cannabis overdose (even if for all intents and purposes it is a logical impossibility). In 1998, Judge Francis Young recommended downgrading weed to Schedule II because it had an accepted medical use in treatment. He also declared it safe to use, and cited research which showed that a user would have to smoke 20,000-40,000 normal-sized joints in 15 minutes to “induce a lethal response.” The number of joints is equivalent to 1,500 pounds of marijuana! We know there are some heavy smokers out there, but let’s be real – that’s more than they could manage in several lifetimes!

To be fair, it’s not all good news on the safety front; you could die from a “mere” 800 joints in 15 minutes, but it would be carbon monoxide poisoning that kills you, and not weed! To be clear, you could hypothetically ‘overdose’ on THC as a result of anxiety or paranoia, and you may become physically sick. You’ll feel pretty terrible for a short time but you’re not going to die, no matter how bad you think your brief sickness gets.

In contrast, the number of opioid deaths in the United States grows at a frightening rate. There were fewer than 6,000 such deaths in 2001, but in 2016, that figure had skyrocketed to over 42,000 – surpassing the number of Americans that die from breast cancer.

Meanwhile, an estimated 80,000 people die from alcohol-related diseases annually while cigarette smoking diseases claim the lives of 480,000 Americans each year. Even so, alcohol and cigarettes are easy to buy while marijuana remains federally illegal. Go figure.

5 – Marijuana is Used By At Least 183 Million People Globally

The 2017 edition of the United Nation’s Drug Report found that the above figure could be as high as 235 million! That’s incredible when you consider that Uruguay is the only nation in the world that has fully legalized the herb (although Canada will join it in the second half of 2018).

Approximately 40 million North Americans enjoy Mary Jane, which makes it the world leader in terms of pot use by region, just ahead of Central and West Africa with 32 million and Central Europe with 23 million users.

The report looked at data from 168 countries and found that there were marijuana busts in all but four of them; a total of 6,000 tons of weed was seized between 2010 and 2015, which is a sad waste. According to 2015 figures, cannabis made up 53% of global drug seizures. It isn’t hard to imagine what police forces could do with the money wasted on these pointless seizures and arrests if marijuana were legalized.

When you read all the data surrounding marijuana, it gets harder and harder to justify its current federally illegal status. To this day, it has caused no overdose deaths, is capable of helping with medical conditions such as chronic pain, and above all, it grows naturally! Meanwhile, synthetic pharmaceutical drugs are poisoning our bodies and filling our cemeteries, but no one wants to ban them.

It is also a sad fact that African-American males are unfairly targeted in marijuana arrests. As a result, a greater number of black men populate the nation’s prisons, for no real reason other than racial bias. If they aren’t scarred by their experience in jail, they will return to a society that still has no use for convicted felons. For them, a single joint is all it takes to begin a downward spiral that ruins their lives. Legalizing marijuana would not only help with medical issues, but it could also greatly improve society as a whole.

The future of cannabis medicine?

The Unwritten Rules of Cannabis Etiquette

3
4 min read
Join the discussion
TOC
Premium
Your subscription has ended
If you love cannabis and appreciate our content, join WayofLeaf Premium today and receive:
Best of all, part of your membership fee will go towards helping to legalize cannabis.
Go Wayofleaf Premium
No thanks, I can't afford it
I already have an account
×
Login in to your premium account